BY Caroline Hood and Amber Adams 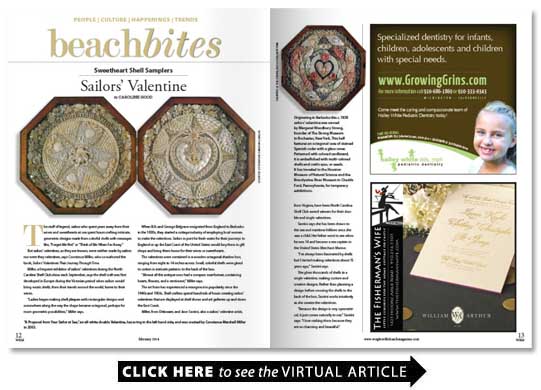 The stuff of legend sailors who spent years away from their wives and sweethearts at sea spent hours crafting intricate geometric designs made from colorful shells with messages like  Forget Me Not or Think of Me When Far Away.

But sailors  valentines as they are known were neither made by sailors nor were they valentines says Constance Miller who co-authored the book Sailors  Valentines: Their Journey Through Time.

Miller a frequent exhibitor of sailors  valentines during the North Carolina Shell Club show each September says the shell craft was first developed in Europe during the Victorian period when sailors would bring exotic shells from their travels around the world home to their wives.

When B.H. and George Belgrave emigrated from England to Barbados in the 1830s they started a cottage industry of employing local women to make the valentines. Sailors in port for fresh water for their journeys to England or up the East Coast of the United States would buy them in gift shops and bring them home for their wives or sweethearts.

The valentines were contained in a wooden octagonal shadow box ranging from eight to 14 inches across. Small colorful shells were glued to cotton in intricate patterns to the back of the box.

Almost all the antique ones had a compass rose format containing hearts flowers and a sentiment Miller says.

The art form has experienced a resurgence in popularity since the 1940s and 1950s. Shell crafters spend hundreds of hours creating sailors valentines that are displayed at shell shows and art galleries up and down the East Coast.

Miller from Delaware and Jane Santini also a sailors  valentine artist from Virginia have been North Carolina Shell Club award winners for their double and single valentines.

Santini says she has been drawn to the sea and maritime folklore since she was a child. Her father went to sea when he was 14 and became a sea captain in the United States Merchant Marine.

Ive always been fascinated by shells but I started making valentines about 15 years ago   Santini says.

She glues thousands of shells to a single valentine making custom and creative designs. Rather than planning a design before securing the shells to the back of the box Santini works intuitively as she creates the valentines.

Because the design is very symmetrical it just comes naturally to me   Santini says.  I love making them because they are so charming and beautiful. 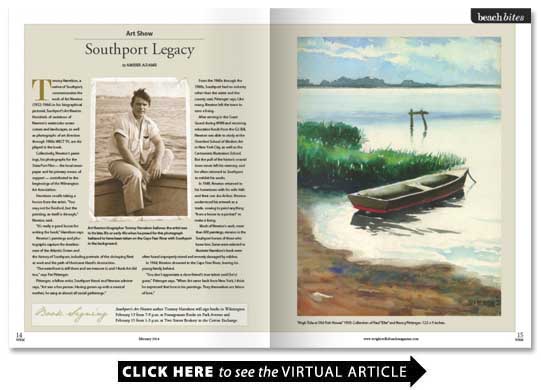 Tommy Harrelson a native of Southport commemorates the work of Art Newton (1922-1964) in his biographical pictorial Southport s Art Newton. Hundreds of variations of Newton s watercolor ocean scenes and landscapes as well as photographs of art direction through 1960s WECT TV are displayed in the book.

Collectively Newton s paintings his photographs for the State Port Pilot the local newspaper and his primary means of support contributed to the beginnings of the Wilmington Art Association.

Harrelson recalls taking a lesson from the artist. You may not be finished but the painting as itself is through  Newton said.

Its really a good lesson for writing the book  Harrelson says.

Newtons paintings and photographs capture the timelessness of the Atlantic Ocean and the history of Southport including portraits of the shrimping fleet at work and the path of Hurricane Hazel s destruction.

The waterfront is still there and we treasure it and I think Art did too  says Pat Pittenger.

Pittenger a fellow artist Southport friend and Newton admirer says   Art was a fun person. Having grown up with a musical mother he sang at almost all social gatherings.

From the 1940s through the 1960s Southport had no industry other than the water and the county seat Pittenger says. Like many Newton left the town to earn a living.

After serving in the Coast Guard during WWII and receiving education funds from the G.I. Bill Newton was able to study at the Oxenfant School of Modern Art in New York City as well as the Cartoonists Illustrators School. But the pull of the historic coastal town never left his memory and he often returned to Southport to exhibit his works.

In 1949 Newton returned to his hometown with his wife Valli and their son Jon Arthur. Newton understood his artwork as a trade vowing to paint anything  from a house to a portrait  to make a living.

Much of Newton s work more than 600 paintings remains in the Southport homes of those who knew him. Some were selected to illustrate Harrelson s book were often found improperly stored and severely damaged by mildew.

In 1964 Newton drowned in the Cape Fear River leaving his young family behind.

You don t appreciate a close friend s true talent until [he s] gone   Pittenger says.  When Art came back from New York I think he expressed that love in his paintings. They themselves are labors of love.

Southport s Art Newton author Tommy Harrelson will sign books in Wilmington February 13 from 7-9 p.m. at Pomegranate Books on Park Avenue and February 15 from 1-3 p.m. at Two Sisters Bookery in the Cotton Exchange.