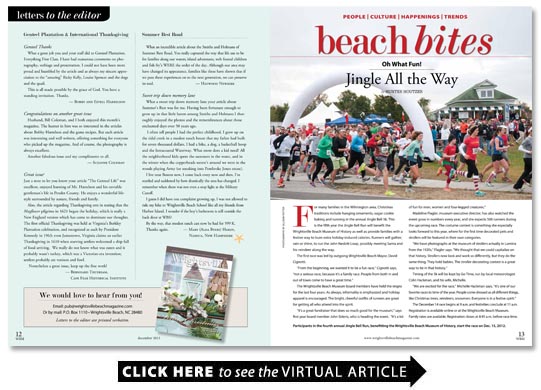 Oh What Fun: Jingle All the Way

For many families in the Wilmington area Christmas traditions include hanging ornaments sugar cookie baking and running in the annual Jingle Bell 5k. This is the fifth year the Jingle Bell Run will benefit the Wrightsville Beach Museum of History as well as provide families with a festive way to burn extra holiday-induced calories. Runners will gather rain or shine to run the John Nesbitt Loop possibly meeting Santa and his reindeer along the way.

From the beginning we wanted it to be a fun race Cignotti says not a serious race because its a family race. People from both in and out of town come to have a great time.

The Wrightsville Beach Museum board members have held the reigns for the last four years. As always informality is emphasized and holiday apparel is encouraged. The bright cheerful outfits of runners are great for getting all who attend into the spirit.

Its a great fundraiser that does so much good for the museum says first year board member John Sideris who is heading the event.  Its a lot of fun for men women and four-legged creatures.

Madeline Flagler museum executive director has also watched the event grow in numbers every year and she expects 500 runners during the upcoming race. The costume contest is something she especially looks forward to this year where for the first time decorated pets and strollers will be featured in their own categories.

We have photographs at the museum of strollers actually in Lumina from the 1920s Flagler says. We thought that we could capitalize on that history. Strollers now look and work so differently but they do the same thing. They hold babies. The stroller decorating contest is a great way to tie in that history.

Timing of the 5k will be kept by Go Time run by local meteorologist Colin Hackman and his wife Michelle.

We are excited for the race Michelle Hackman says. Its one of our favorite races to time of the year. People come dressed as all different things like Christmas trees reindeers snowmen. Everyone is in a festive spirit.

The December 14 race begins at 9 a.m. and festivities conclude at 11 a.m. Registration is available online or at the Wrightsville Beach Museum. Family rates are available. Registration closes at 8:45 a.m. before race time.

The poinsettia is one of Downeys most popular and most labor-intensive seasonal designs. Just one poinsettia ornament consists of 17 individual pieces  two blossoms with six petals each and five leaves  in addition to the clear glass globe that surrounds the fragile crimson flowers.

There is a little bit of a learning curve Downey explains. You have to overcome your fear of fire. After a while and a lot of practice you get cut and burned less often.

It takes Downey two hours to create one poinsettia ornament which means two hours of working with his hands over a flaming torch fueled with propane and oxygen and manipulating malleable glass that has reached about 2 000 degrees Fahrenheit.

Downey is currently engaged in his dream retirement gig after more than 30 years of working for an industrial glass company. Three decades ago his designs were limited by the number of colors that were available in borosilicate glass the type of heat-resistant glass from which Pyrex is made: cobalt blue brown greenish-yellow and yellow. Today an array of shades is accessible because of developments in glass technology. Downeys Wilmington workshop includes about 25 different colors and he custom-mixes glass to create different tones. This is the technique he uses to create the perfect shade of red for his poinsettia ornaments.

Other favorite ornaments that Downey handcrafts annually include a snowman wearing a striped scarf and a red candle with a yellow flame that sits atop a berried wreath. Ornaments cost between $30 and $65. Since moving to Wilmington two years ago with his wife Lisa Coats he has introduced regionally inspired ornaments including sea turtles jellyfish and pelicans. Every year he introduces a new Christmas design.

This year its going to be a panda holding a candy cane sitting on a green wreath he says. His goal is to create 700 ornaments each one individually signed dated and numbered. Some have been collecting the ornaments every year since 1988 creating illuminated Christmas trees sparkling with more than two dozen of his original works of art.

Downey enjoys welcoming curious guests to his workshop to witness the flameworking process as well as donating a portion of his sales to community nonprofits. He will host an open house at his workshop on Saturday Dec. 7 from 10 a.m. to 5 p.m. Ten percent of open house sales will be donated to the Good Shepherd Center and Wilmington Area Rebuilding Ministry (WARM). For more information visit www.jimdowneyglass.com

The cameo medallion a portrait or scene carved in relief with a contrasting colored background is making a fashion comeback. The art of cameo carving dates back to at least the first century B.C. when cameos were carved in gemstones. Cameos enjoyed a golden age during the ancient Greco-Roman Empires.

In the 15th and 16th centuries cameos were made popular by Englands Queen Victoria.

In the 19th century carvers made use of hardstones such as agate onyx and sardonyx as well as shell lava coral jet mother of pearl and manmade materials. Josiah Wedgwood developed a method of creating a cameo from a substance known as jasper ware. His cameos became world famous and the blue background of his pieces became known as Wedgwood blue.

Cameos are like miniature works of art says collector Tom Richardson. He became enamored of the dying art form after attending an estate sale seven or eight years ago. Since then he has amassed a cache of more than 300 in his downtown Wilmington storefront Antiques of Old Wilmington.

For Richardson the most traditional cameo is carved from conch shells.

They carve from one layer to the next getting the contrast he says.

Unfortunately theyre not getting the apprentices today that they once did; so its a dying art Richardson says.

Some vintage cameos depict scenes like ancient Pompeii and Mount Vesuvius the Roman Coliseum. Standard images were a womans portrait. Other cameos were rendered as full-length portraits. Each piece is most easily dated by the featured hairstyles like the late-19th century Gibson Girl shown on the bottom left of page 17.

Gibsons wife was his model but everyone was copying that style Richardson says. The classic Grecian or Roman styles have always been popular.

He quotes one of his clients as saying The cameo is like a strand of white pearls. They may come in and out of fashion at times but they never go out of style.

In the 1920s the cameo saw a resurgence in popularity Richardson says. Fashioned as a brooch that may also be worn as a pendant he says there is a heightened popularity today.

I think there will always be those who love cameos Wutkowski says.

They are very traditional very nostalgic. A lot of young ladies are using them in weddings now Richardson says.

Weve had several weddings where the brides were interested in cameos Skipper says. They wore vintage dresses and wanted vintage pieces and so the cameos were bought and used for their weddings.

Skipper predicts the trend would be more apparent in fashion towns like New York Atlanta or Charleston.

How does one recognize a real seashell or hardstone cameo as opposed to a plastic or resin one?

Shell cameos have curved backs. Turn the cameo over and if you look closely youll see a flame-like structure which are growth lines of the shell. The lines appear almost like veins.

With shell or hardstone carving lines may be visible. Plastic or resins are usually poured into molds and will be absent of tool-carving marks.

When held up in a strong light or sunlight shell cameos will have a translucent quality and usually have more depth.

Always inspect the cameo you are going to purchase under a microscope or jewelers gemscope regardless of the material.