BY Pam Creech and Matt Corpening 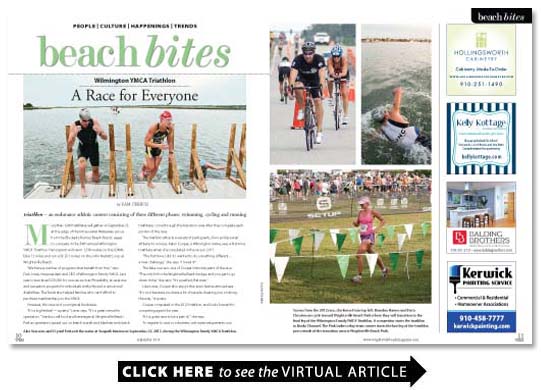 Wilmington YMCA Triathlon: A Race for Everyone

More than 1 000 triathletes will gather on September 21 at the edge of the Intracoastal Waterway across from the Blockade Runner Beach Resort eager to compete in the 34th annual Wilmington YMCA Triathlon. Participants will swim 1 500 meters in the ICWW bike 12 miles and run a 5k (3.1 miles) on the John Nesbitt Loop at Wrightsville Beach.

We have a number of programs that benefit from this says Dick Jones the president and CEO of Wilmington Family YMCA. Last years race raised $25 000 for courses such as Physability an exercise and recreation program for individuals with physical or emotional disabilities. The funds also helped families who cant afford to purchase membership join the YMCA.

However this race isnt your typical fundraiser.

Its a big festival a party Jones says. Its a great venue for spectators. Vendors sell food and beverages at Wrightsville Beach Park as spectators sprawl out on beach towels and blankets and watch triathletes come through the transition area after they complete each portion of the race.

The triathlon attracts a variety of participants from professional athletes to novices. Kalyn Cooper a Wilmington native was a first-time triathlete when she completed in the race in 2011.

The first time I did it I wanted to do something differenta new challenge she says. I loved it!

The bike course is one of Coopers favorite parts of the race. The only hill is the Wrightsville Beach bridge and you get to go down Airlie she says. Its a perfect flat area.

Like Jones Cooper also enjoys the races festive atmosphere. Its cool because you have a lot of people cheering you on along the way she says.

Cooper competed in the 2012 triathlon and looks forward to competing again this year.

Its a great race to be a part of she says.

To register to race or volunteer visit www.setupevents.com

What started as a small-scale beach sweep has been keeping New Hanover County beautiful since 1987. The 2013 edition of Big Sweep as it is now known will take place Saturday September 21. A massive effort producing equally sizable results Keep New Hanover County Beautiful is a subdivision of Keep N.C. Beautiful which is a certified affiliate of Keep America Beautiful. The Big Sweep is part of the International Coastal Cleanup that includes approximately 90 countries. Wrightsville Beach and other county beaches will be combed over by volunteers with the prevailing goal of reducing and eliminating debris and litter that pollute marine and estuarine areas.

The relatively simple idea of cleaning up has the potential to affect positive change in a multitude of ways. Last year 632 participants picked up more than 5 500 pounds of trash from 41.3 miles of waterways 3.5 miles of roads and 61 acres of parks indirectly preventing virulence and pestilence in human populations by decreasing amounts of disease-carrying pests and removing the agents that chemically contaminate groundwater. In addition to saving human lives Big Sweep helps to keep animals from becoming injured or dying by displacing the objects and litter that they so often mistake for food or in which they become entangled.

Education is another aim of the Big Sweep. It offers books posters and brochures to teachers six-pack ring recycling trees for schools and products and programs for grades K-5. To donate or sign up and view tips for the day of the cleanup visit ncbigsweep.org