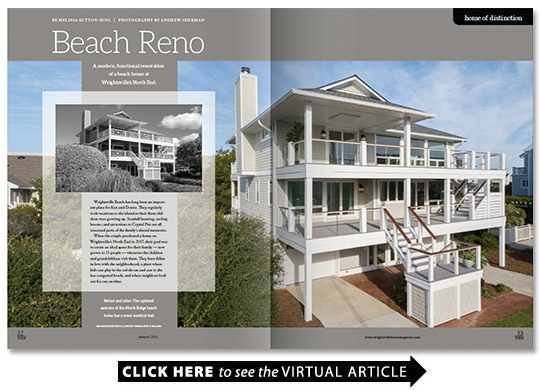 Wrightsville Beach has long been an important place for Ken and Denise. They regularly took vacations to the island as their three children were growing up. Seashell hunting surfing lessons and excursions to Crystal Pier are all treasured parts of the family’s shared memories.

When the couple purchased a home on Wrightsville’s North End in 2017 their goal was to create an ideal space for their family — now grown to 15 people — whenever the children and grandchildren visit them. They have fallen in love with the neighborhood a place where kids can play in the cul-de-sac and run to the less congested beach and where neighbors look out for one another.

Denise and Ken knew they wanted to remodel the late ’80s beach house but waited a year before beginning renovations. By living in the space for a while they were able to identify what needed to be done to make it work best for their family. When they had a vision for the six-bedroom four-bath house the homeowners contacted design/build contractors Nick and Catherine Balding of Balding Brothers to handle the project.

To best capture the views the house now incorporates a reverse floor plan. The ground floor is the entry way with a garage bay on each side. Five of the bedrooms and three of the bathrooms are on the second floor and the top floor functions as the main living space.

On the exterior railings were replaced with ipe bannisters and cable rails lending a nautical feel and providing a less obstructed view from the decks. Shaker siding helps to preserve the transitional beach home feel creating the perfect space for making new family memories for years to come.

New windows and doors were installed throughout. The windows made a huge impact around the top story living area especially providing both an aesthetic and practical upgrade. Ken and Denise had planned to keep the existing casements but Nick did some research and found an option that was more visually appealing more functional and more cost-effective. Replacing the older non-operable windows are triple-casement units. Each consists of a large upper window above two smaller operable awning windows. The new windows are hurricane and high-impact rated as well as being more energy efficient. White window frames help brighten the space and installation of the operable windows near the floor creates airflow to let in cooling breezes.

With its panoramic views and open floor plan the top floor living area is the center of activity. The kitchen received a comprehensive makeover; the previous layout was cramped and short on counter space. Now when the whole family gets together the many cooks easily fit in the kitchen. There is room for multiple people to prep simultaneously as well as seating for each family member.

The kitchen island top is custom manufactured Cambria Britannica quartz. Catherine selected coordinating countertops in light gray to complement the island which serves as a focal point for the kitchen and dining area.

The island itself provides plentiful storage and has hidden drawers on one side for things like the grandchildren’s board games and puzzles. Above the island hang two pendant lights their dual-toned globes reminiscent of bobbing buoys.

When Ken and Denise bought the home it included a defunct dumbwaiter that proved to be one of the most interesting challenges of the renovation. The manufacturer had long gone out of business so it couldn’t be repaired. It was replaced with a pneumatic vacuum elevator from Port City Elevator that maintains the same footprint preserving space while adding functionality.

A pneumatic vacuum elevator uses air pressure to move the passenger cab up and down inside an airtight tube. In addition to taking up less space than a traditional elevator it is energy-efficient and quiet. Catherine was able to find handrails that worked with both the modern feel of the elevator design and the relaxed beachy aesthetic of the home’s redesign.

The fireplace mantle is Denise’s favorite detail of the renovation. It was fashioned from a board salvaged from the old Crystal Pier a place the whole family enjoyed on vacations as the children were growing up. Denise spotted a picture at Re-eco Design in Wilmington that had been made from salvaged wood from the pier and inquired about lumber that might be purchased for a modern hearth with a piece of Wrightsville Beach and family history.

Throughout the home Catherine worked with Denise to select subtle touches of texture like the penny tile flooring in one of the bathrooms and a shower wall of wavy white tiles in another.

One bathroom was completely reconfigured to allow access from the hallway. The master bathroom was also redesigned with the large soaking tub removed and a contemporary tiled shower installed. New floor fixtures and vanity modernized the space while staying functional. This new layout allowed Nick to create a custom recessed closet in previously unutilized wall space adding much-needed storage to the master bedroom which previously had just one small closet.

Much of the important work of renovation was behind the walls Ken notes. Issues such as misdirected fan vents uncapped HVAC ducts and insufficient wiring had to be corrected. The entire HVAC unit was moved from the attic to the top floor for better efficiency and whole-house dehumidifiers were installed. Even though the results are invisible the work was critical. The homeowners say they are grateful to work with a team that took each of those challenges as seriously as if it were their own home.

Durability was an important factor in many of the design decisions. The homeowners wanted a space that would be both safe and comfortable for all generations so they selected fixtures and finishes that were child-friendly. From the handrails to the window levers every detail was chosen to be attractive in design and safe for the kids.