BY Jamie Penn and Meghan Barnes 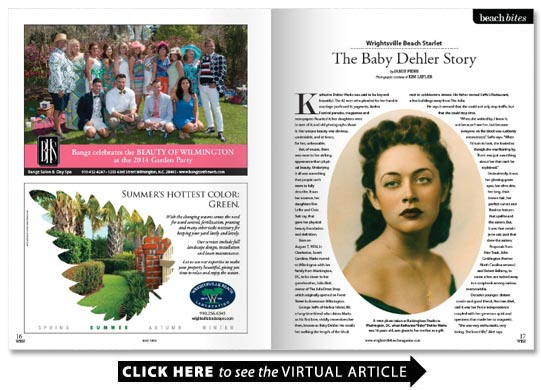 Katherine Dehler Marks was said to be beyond beautiful. The 42 men who pleaded for her hand in marriage professed it; pageants Azalea Festival parades magazines and newspapers flaunted it; her daughters were in awe of it; and old photographs shout it. Her unique beauty was obvious undeniable and at times for her unbearable.

But of course there was more to her striking appearance than physical beauty. Underlying it all was something that people can t seem to fully describe. It was her essence her daughters Kim Lefler and Chris Suit say that gave her physical beauty foundation and definition.

Born on August 7 1924 in Charleston South Carolina Marks moved to Wilmington with her family from Washington DC to be closer to her grandmother Julia Akel owner of The Julia Dress Shop which originally opened on Front Street in downtown Wilmington.

George Saffo of Harbor Island 89 a long-time friend who claims Marks as his first love vividly remembers her then known as Baby Dehler. He recalls her walking the length of the block next to cobblestone streets. His father owned Saffo s Restaurant a few buildings away from The Julia.

When she walked by I knew it not because I saw her but because everyone on the block was suddenly mesmerized   Saffo says.  When I d turn to look she looked as though she was floating by. There was just something about her that can t be explained.

Undoubtedly it was her glowing green eyes her olive skin her long thick brown hair her perfect curves and flawless features that spellbound the suitors. But it was that certain je ne sais quoi that drew the suitors.

Proposals from Alex Trask John Coddington (former North Carolina senator) and Robert Bellamy to name a few are tucked away in a scrapbook among various memorabilia.

Decades younger distant cousin and good friend Norman Akel said it was her fierce independence coupled with her generous spirit and openness that made her so magnetic.

She was very enthusiastic very loving. She loved life   Akel says.  I used to love to go down to the pier with her behind our house at the Edgewater Hotel on Wrightsville Beach where she d take me crabbing. She was the only one who would make me walk! I could always convince everyone else to carry me. She always encouraged me.

Saffo says although Marks had mastered social grace and was a skilled contender in the public realm — spending many a night dancing at the Lumina Pavilion and many days posing for the camera and attending tennis dates and lunches — that she longed to be left alone.

She had a shyness about her looks. I think she longed to be more normal   Saffo says.

She would spend hours walking on the beach in front of her grandmother s beach house. She d swim alone beyond the break or across Masons Inlet to Figure Eight Island. She was an avid reader and was known for her extensive vocabulary. She also loved to go crabbing and fishing with her Uncle Habeeb.

She just loved this place   Lefler says.  All she wanted to do was be on the beach alone. But it was hard for her to keep the entourage away.

Marks was encouraged by her grandmother to pursue pageants and a modeling career. She participated in her first pageant at age 16 in Washington DC and later won several. She pursued a modeling career with Merle Norman Cosmetics and was called to Washington DC for several Hollywood screen tests. But she was unwilling to relocate.

She wouldn t leave her family   Lefler says.  She didn t want to leave the beach.

When Marks was 19 her mother was struck by a dune buggy on Wrightsville Beach rushed to Babies Hospital in a coma never awakened and died shortly thereafter.

Having always had a kinship with her grandmother their relationship then became vital.

Marks attended Duke University School of Nursing after high school and settled back in Wilmington upon graduation.

After many years of courting Dehler finally said yes at the age of 34 to Morton Marks a Naval Academy graduate. The couple met during a dance at the academy and were subsequently married there. Her husband s position at the Pentagon took her away from her family and her dreamy youth to Fairfax Virginia where the newlyweds started a family.

Mom was a devout Christian raised us three children in church as Christians   Lefler says.

Her mother moved back to Wilmington in 1977 where she was already a member of St. Paul s Episcopal on Market Street. In 1980 she joined St. Andrews on the Sound and served for more than ten years on its altar committee.

But it was motherhood that allowed Dehler to express the full range of her love.

The love she was shown was immeasurable. All the doting and affection from men. Her father doted on her. Her grandmother doted on her   Lefler says.  And she transferred all that love to us. She was the epitome of unconditional love.

Later in life she would carry that love and support to her five grandchildren.

She may have been Baby Dehler in her younger days but she loved being called Grandma Kathy which she told my son Ryan in one of their last conversations   Suit says.

She says that her mother s essence revealed itself in her handwriting. She was urged by her grandmother to study Spencerian script (American cursive) and mastered it as she would everything she tried.

It was beautiful and flowing with plenty of flourishes like her personality   Suit says.

Katherine Dehler Marks lived in her home in Wilmington up until March 14 2014 when she was taken to New Hanover Regional Medical Center where she died of a blood infection on March 16.  Her two daughters and five grandchildren survive her. 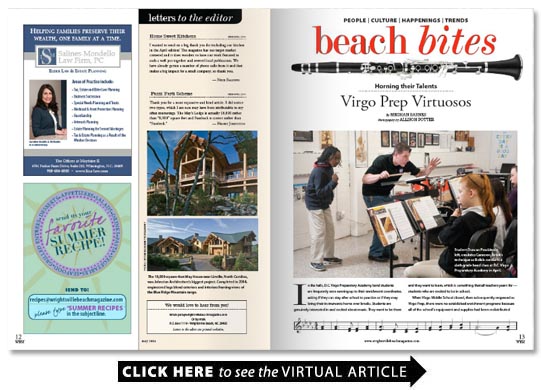 In the halls D.C. Virgo Preparatory Academy band students are frequently seen running up to their enrichment coordinator asking if they can stay after school to practice or if they may bring their instruments home over breaks. Students are genuinely interested in and excited about music. They want to be there and they want to learn which is something that all teachers yearn for — students who are excited to be in school.

When Virgo Middle School closed then subsequently reopened as VIrgo Prep there were no established enrichment programs because all of the school s equipment and supplies had been redistributed throughout other New Hanover County schools — including the musical instruments. Although many of these instruments were still catalogued for use at Virgo other students were already learning to play them and would continue to use them for the rest of their middle school careers. The situation left Cameron Bolish the enrichment coordinator with a very large task: find enough instruments that students could use free of charge.

I was told   I want a band    Bolish explains.  But I was given an empty room and that was it.

Wrightsville Beach resident and Wilmington businessman Bob Moulton CEO of National Pawn understood the majority of Virgo students could not afford instruments. Touched by their need Moulton furnished the students with enough instruments to start a band and a yearly maintenance donation.

Every single one of my kids who wants to play an instrument now has the opportunity to do so   Bolish says.  Even if they can t afford to buy or lease an instrument they now have the  ability to enrich themselves and hone in on their individual talents.

The area surrounding D.C. Virgo where many of the students live is deemed an enrichment zone by the Blue Ribbon Commission which means it is populated by mostly at-risk students making the introduction of a music department that much more important. By offering students music programs at the school and partnering with the Boys and Girls Club that adjoins the Virgo campus the school may make drastic impacts in the lives of students who experience arts to which they may not have otherwise been exposed provide afterschool activities that keep students in the safety of the school or community outreach system and foster tools for succeeding beyond middle school.

The work ethic and dedication instilled in these students through their enrichment programs directly carries over into their everyday lives making it easier for them to transition into a high school setting and later college.

By learning to play instruments students cultivate skills that provide them with opportunities for college scholarships grants and awards to help with the price of tuition and living expenses while attending school.

Most of all it makes the students happy.

For more information to volunteer or make a donation contact Cameron Bolish at 910-251-6150.