BY Pam Creech and Cullen Lea 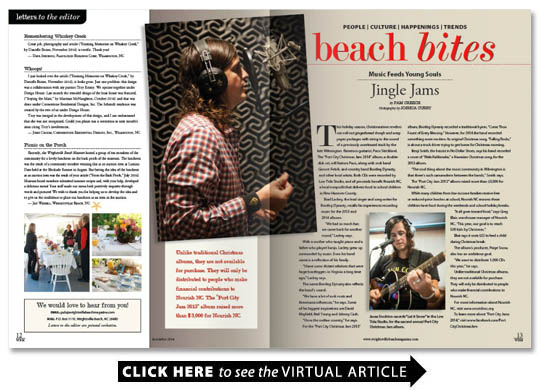 This holiday season Christmastime revelers can roll out gingerbread dough and wrap paper packages with string to the sound of a previously unreleased track by the late Wilmington flamenco guitarist Paco Strickland. The Port City Christmas Jam 2014 album a double-disk set will feature Paco along with rock band Groove Fetish and country band Bootleg Dynasty and other local artists. Both CDs were recorded by Low Tide Studio and all proceeds benefit Nourish NC a local nonprofit that delivers food to school children in New Hanover County.

Brad Lackey the lead singer and song writer for Bootleg Dynasty recalls his experiences recording music for the 2013 and 2014 albums.

We had so much fun; we came back for another round Lackey says.

With a mother who taught piano and a father who played banjo Lackey grew up surrounded by music. Even his band name is a reflection of his family.

I have some distant relatives that were huge bootleggers in Virginia a long time ago Lackey says.

We have a lot of rock roots and Americana influences he says. Some of his biggest inspirations are David Mayfield Neil Young and Johnny Cash.

I love the outlaw country he says.

For the Port City Christmas Jam 2013 album Bootleg Dynasty recorded a traditional hymn Come Thou Fount of Every Blessing. However for 2014 the band recorded something more modern. Its original Christmas song Falling Rocks is about a truck driver trying to get home for Christmas morning.

Benji Smith the bassist in No Dollar Shoes says his band recorded a cover of Mele Kalikimaka a Hawaiian Christmas song for the 2013 album.

The cool thing about the music community in Wilmington is that there s such camaraderie between the bands Smith says.

While many children from low-income families receive free or reduced-price lunches at school Nourish NC ensures these children have food during the weekends and school holiday breaks.

It all goes toward food says Greg Blair warehouse manager of Nourish NC. This year our goal is to reach 500 kids by Christmas.

Blair says it costs $32 to feed a child during Christmas break.

We want to distribute 1 000 CDs this year he says.

Unlike traditional Christmas albums they are not available for purchase. They will only be distributed to people who make financial contributions to Nourish NC. 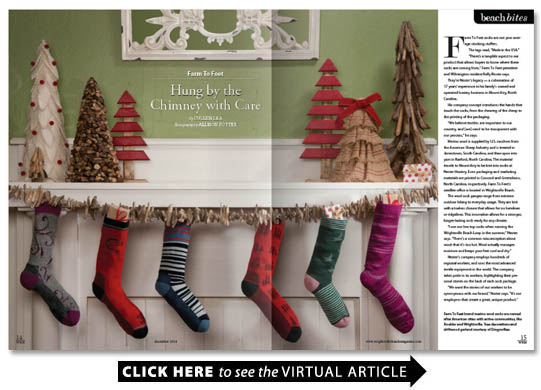 Hung by the Chimney with Care

Farm To Feet socks are not your average stocking stuffers.

The tags read Made in the USA.

There s a tangible aspect to our product that allows buyers to know where these socks are coming from Farm To Feet president and Wilmington resident Kelly Nester says.

They re Nester s legacy — a culmination of 17 years  experience in his family s owned and operated hosiery business in Mount Airy North Carolina.

His company concept introduces the hands that touch the socks from the shearing of the sheep to the printing of the packaging.

We believe textiles are important to our country and [we] need to be transparent with our process he says.

Merino wool is supplied by U.S. ranchers from the American Sheep Industry and is treated in Jamestown South Carolina and then spun into yarn in Raeford North Carolina. The material travels to Mount Airy to be knit into socks at Nester Hosiery. Even packaging and marketing materials are printed in Concord and Greensboro North Carolina respectively. Farm To Feet s satellite office is located in Wrightsville Beach.

The wool sock gauges range from extreme outdoor hiking to everyday usage. They are knit with a toeless closure that allows for no hemlines or ridgelines. This innovation allows for a stronger longer-lasting sock ready for any climate.

I use our low top socks when running the Wrightsville Beach Loop in the summer Nester says. There s a common misconception about wool: that it s too hot. Wool actually manages moisture and keeps your feet cool and dry.

Nester s company employs hundreds of regional workers and uses the most advanced textile equipment in the world. The company takes pride in its workers highlighting their personal stories on the back of each sock package.

We want the stories of our workers to be synonymous with our brand Nester says. It s our employees that create a great unique product. 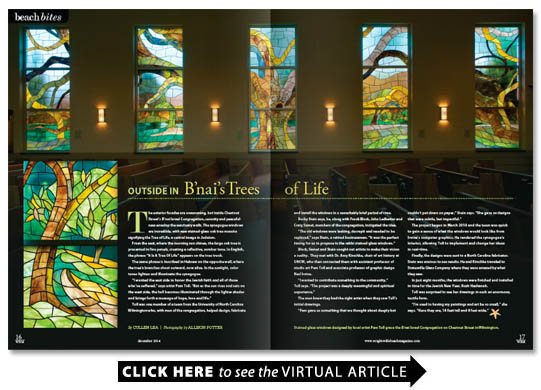 Outside In: B’nai s Trees of Life

The exterior facades are unassuming but inside Chestnut Street s B nai Israel Congregation serenity and peacefulness envelop the sanctuary walls. The synagogue windows are incredible with new stained-glass oak tree mosaics signifying the Tree of Life a central image in Judaism.

From the east where the morning sun shines the large oak tree is presented in five panels creating a reflective somber tone. In English the phrase It Is A Tree Of Life appears on the tree trunk.

The same phrase is inscribed in Hebrew on the opposite wall where the tree s branches shoot outward now alive. In the sunlight color tones lighten and illuminate the synagogue.

I wanted the east side to honor the Jewish faith and all of those who ve suffered says artist Pam Toll. But as the sun rises and sets on the west side the hall becomes illuminated through the lighter shades and brings forth a message of hope love and life.

Toll was one member of a team from the University of North Carolina Wilmington who with men of the congregation helped design fabricate and install the windows in a remarkably brief period of time.

Bucky Stein says he along with Frank Block John Ledbetter and Craig Samet members of the congregation instigated the idea.

The old windows were leaking decrepit and needed to be replaced says Stein a retired businessman. It was the perfect timing for us to propose to the rabbi stained-glass windows.

Block Samet and Stein sought out artists to make their vision a reality. They met with Dr. Amy Kirschke chair of art history at UNCW who then connected them with assistant professor of studio art Pam Toll and associate professor of graphic design Ned Irvine.

I wanted to contribute something to the community Toll says. The project was a deeply meaningful and spiritual experience.

The men knew they had the right artist when they saw Toll s initial drawings.

Pam gave us something that we thought about deeply but couldn t put down on paper Stein says. She gave us designs that were subtle but impactful.

The project began in March 2014 and the team was quick to gain a sense of what the windows would look like from Irvine s computer graphics. He rendered the synagogue s interior allowing Toll to implement and change her ideas in real-time.

Finally the designs were sent to a North Carolina fabricator. Stein was anxious to see results. He and Kirschke traveled to Statesville Glass Company where they were amazed by what they saw.

In just eight months the windows were finished and installed in time for the Jewish New Year Rosh Hashanah.

Toll was surprised to see her drawings in such an enormous tactile form.

I m used to having my paintings and art be so small she says. Here they are 14 feet tall and 4 feet wide.