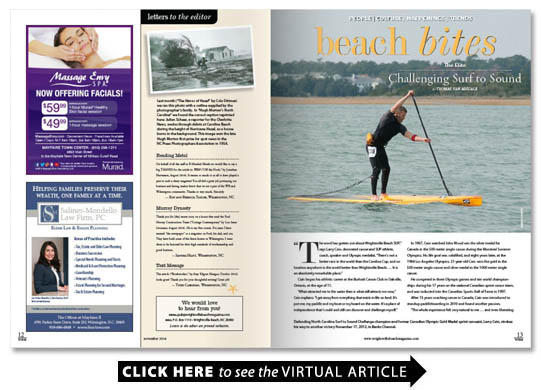 The Elite: Challenging Surf to Sound

Cain began his athletic career at the Burloak Canoe Club in Oakville Ontario at the age of 11.

What attracted me to the water then is what still attracts me now Cain explains. I get away from everything that exists in life on land. It s just me my paddle and my boat or my board on the water. It s a place of independence that I could and still can discover and challenge myself.

He competed in three Olympic games and ten world championships during his 17 years on the national Canadian sprint canoe team and was inducted into the Canadian Sports Hall of Fame in 1997.

After 13 years coaching canoe in Canada Cain was introduced to standup paddleboarding in 2010 and found another passion.

The whole experience felt very natural to me  and even liberating because in canoe you can only paddle on one side without ever changing sides Cain says. It was an immediate luxury to actually be able to change sides on SUP. Going from a staggered stance in canoe to a parallel foot stance on SUP was a natural transition which is why so many canoeists have made the transition.

I race more in Wrightsville Beach than anywhere else Cain says.

Last year I competed against Australians Europeans and the top guys from Hawaii and California at the Surf to Sound Challenge and Carolina Cup Cain says. But even if no out-of-state or out-of-country participants were to attend there is an incredibly strong SUP community in Wrightsville that has been forcing me to train harder before I return.

For the elite Cain s the man the beat during the North Carolina Surf to Sound Challenge Friday October 31 through Sunday November 2 which launches at the Blockade Runner Beach Resort. 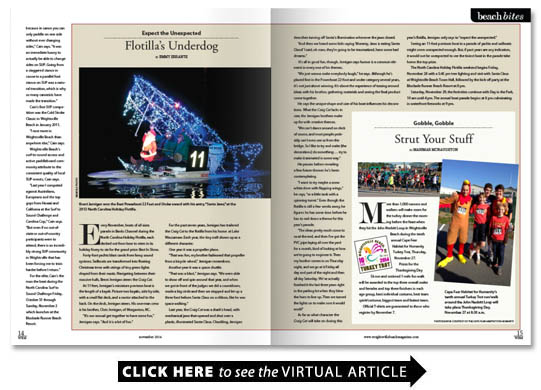 Every November boats of all sizes parade in Banks Channel during the North Carolina Holiday Flotilla each decked out from bow to stern in its holiday finery to vie for the grand prize: Best In Show.

At 11 feet Jernigan s miniature pontoon boat is the length of a kayak. Picture two kayaks side by side with a small flat deck and a motor attached to the back. On the deck Jernigan steers. His one-man crew is his brother Chris Jernigan of Morganton NC.

It s our annual get together to have some fun Jernigan says. And it is a lot of fun.

For the past seven years Jernigan has trailered the Craig Cat to the flotilla from his home  at Lake Waccamaw. Each year the tiny craft shows up as a different character.

One year it was a propeller plane.

That was fun my brother fashioned that propeller from a bicycle wheel Jernigan remembers.

Another year it was a space shuttle.

That was a blast Jernigan says. We were able to show off and spin around that year and when we got in front of the judges we did a countdown made a big circle and then we stopped and let up a three foot helium Santa Claus on a ribbon like he was space walking.

Last year the Craig Cat was a shark s head with mechanical jaws that opened and shut over a plastic illuminated Santa Claus. Chuckling Jernigan describes turning off Santa s illumination whenever the jaws closed.

And then we heard some kids saying Mommy Jaws is eating Santa Claus!  I said oh man they re going to be traumatized have some bad dreams.

It s all in good fun though. Jernigan says humor is a common element in every one of his themes.

We just wanna make everybody laugh he says. Although he s placed first in the Powerboat 22-foot and under category several years it s not just about winning. It s about the experience of tossing around ideas with his brother gathering materials and seeing the final product come together.

He says the unique shape and size of his boat influences his decorations. What the Craig Cat lacks in size the Jernigan brothers make up for with creative themes.

We can t dance around on deck of course and most people probably can t even see us from the bridge. So I like to try and make [the decorations] do something . . . try to make it animated in some way.

He pauses before revealing a few future themes he s been contemplating.

I want to try maybe a snow white dove with flapping wings he says or a little tank with a spinning turret. Even though the flotilla is still a few weeks away he figures he has some time before he has to nail down a theme for this year s parade.

The ideas pretty much come to us at the end and then I ve got the PVC pipe laying all over the yard for a month kind of looking at how we re going to engineer it. Then my brother comes in on Thursday night and we go at it Friday all day and part of the night and then all day Saturday. We ve actually finished it the last three years right in the parking lot when they blew the horn to line up. Then we turned the lights on to make sure it would work!

As far as what character the Craig Cat will take on during this year s flotilla Jernigan only says to expect the unexpected.

Seeing an 11-foot pontoon boat in a parade of yachts and sailboats might seem unexpected enough. But if past years are any indication it would not be unexpected to see the tiniest boat in the parade take home the top prize.

Saturday November 29 the festivities continue with Day in the Park 10 am until 4 pm. The annual boat parade begins at 6 pm culminating in waterfront fireworks at 9 pm.

More than 1 000 runners and walkers will make room for the turkey dinner the morning before the feast when they hit the John Nesbitt Loop in Wrightsville Beach during the tenth annual Cape Fear Habitat for Humanity Turkey Trot Thursday November 27.

Official T-shirts are guaranteed to those who register by November 7. 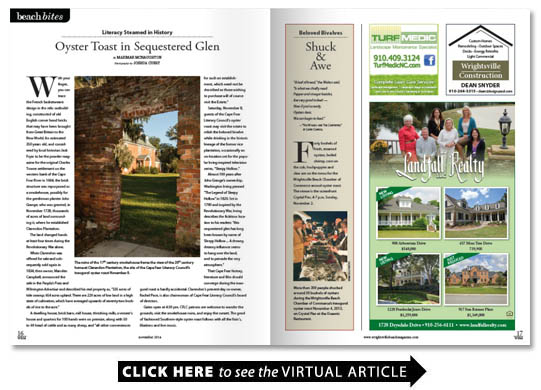 With your finger you can trace the French basketweave design in the relic outbuilding constructed of old English corner bond bricks that may have been brought from Great Britain to the New World. An estimated 350 years old and considered by local historian Jack Fryar to be the powder magazine for the original Charles Towne settlement on the western bank of the Cape Fear River in 1664 the brick structure was repurposed as a smokehouse possibly for the gentleman planter John Grange who was granted in November 1728 thousands of acres of land surrounding it where he established Clarendon Plantation.

The land changed hands at least four times during the Revolutionary War alone.

When Clarendon was offered for sale and subsequently sold again in 1834 then owner Marsden Campbell announced the sale in the People s Press and Wilmington Advertiser and described his real property as 335 acres of tide swamp; 654 acres upland. There are 220 acres of low land in a high state of cultivation which have averaged upwards of seventy-two bushels of rice to the acre.

A dwelling house brick barn mill house threshing mills overseer s house and quarters for 100 hands were on premise along with 50 to 60 head of cattle and as many sheep and all other conveniences for such an establishment which need not be described as those wishing to purchase will of course visit the Estate.

Saturday November 8 guests of the Cape Fear Literary Council s oyster roast may visit the estate to relish the beloved bivalve while drinking in the historic lineage of the former rice plantation occasionally an on-location set for the popular Irving-inspired television series Sleepy Hollow.

Almost 100 years after John Grange s ownership Washington Irving penned The Legend of Sleepy Hollow in 1820. Set in 1790 and inspired by the Revolutionary War Irving describes the fictitious location to his readers: this sequestered glen has long been known by name of Sleepy Hollow … A drowsy dreamy influence seems to hang over the land and to pervade the very atmosphere.

Gates open at 4:30 pm. CFLC patrons are welcome to wander the grounds visit the smokehouse ruins and enjoy the sunset. The good ol  fashioned Southern-style oyster roast follows with all the fixin s libations and live music.

A loaf of bread the Walrus said
Is what we chiefly need:
Pepper and vinegar besides
Are very good indeed —
Now if you re ready
Oysters dear
We can begin to feed.
— The Walrus and The Carpenter by Lewis Carroll


Forty bushels of fresh steamed oysters boiled shrimp corn on the cob hushpuppies and slaw are on the menu for the Wrightsville Beach Chamber of Commerce annual oyster roast. The venue is the oceanfront Crystal Pier 4-7 p.m. Sunday November 2.

Celebrated statewide Preservation North Carolina s 75th anniversary culminates in Wrightsville Beach. With a nod to the 50th birthday of the Blockade Runner Beach Resort Sunday November 9 from noon to 4 pm explore the Mid-Century Modern landmark and within walking distance of the hotel tour four historic beach cottages: The Davis-Smith Cottage The Fishblate-Bellamy Cottage The MacRae Cottage and the resort s own 1930s cottage. The Bellamy Mansion Museum is hosting the event supported by the Wrightsville Beach Museum of History.