BY Pam Creech and Marimar McNaughton 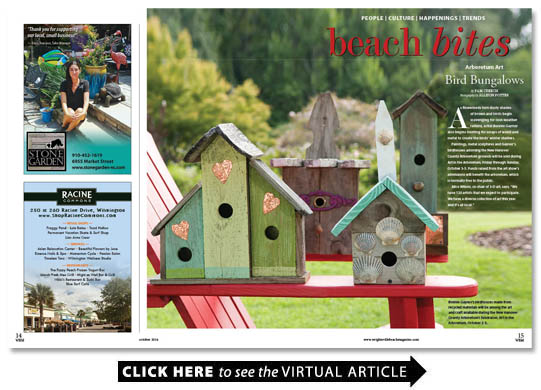 Paintings metal sculptures and Gaynor s birdhouses adorning the New Hanover County Arboretum grounds will be sold during Art in the Arboretum Friday through Sunday October 3-5. Funds raised from the art show s admissions will benefit the arboretum which is normally free to the public.

Alice Wilson co-chair of 3-D art says   We have 120 artists that we expect to participate. We have a diverse collection of art this year and it s all local.

Gaynor will contribute 25 of her handcrafted birdhouses to the show. She started making birdhouses from recycled materials by experimenting with tools at home.

My husband is a former shop teacher   Gaynor says.  In our garage we have some really awesome tools.

In hopes of finding a piece of scrap metal or wood to use Gaynor says she takes a different route to and from her home each day picking up pieces of torn-down fence posts.

Sometimes it s got some gorgeous old paint on it   she says.

Gaynor is also inspired by her natural surroundings; she often uses uniquely shaped driftwood and tree branches in her work.

Although Gaynor has been creating birdhouses for more than 40 years she never makes duplicates of her artwork. Each house has a different shape and some are decorated with seashells.

They re all funky. They re all one-of-a-kind   Gaynor says.  They don t look like anything you see in the bird store.

Despite the variety Gaynor says she doesn t design her pieces with specific species in mind.

They re for whoever wants to climb in   she says.

Gaynor encourages everyone in the Wilmington community to visit Art in the Arboretum and celebrate the garden s 25th anniversary.

Just to look through the grounds is unbelievable   she says.

A special silent auction begins Saturday October 4 at 10 am ending during the Friends of the Arboretum party at 6:45 pm.

Last year s show raised more than $24 000 and this year s show is expected to be even more successful. 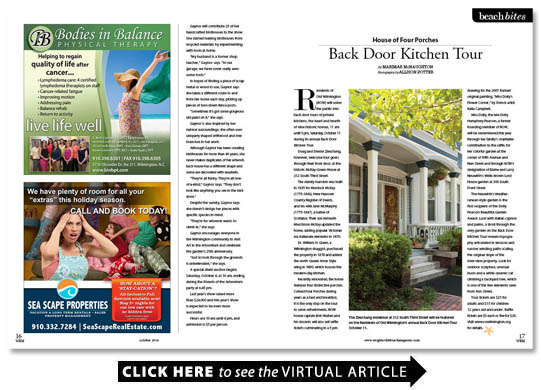 Residents of Old Wilmington (ROW) will usher the public into back door tours of private kitchens the heart and hearth of nine historic homes 11 am until 5 pm Saturday October 11 during its annual Back Door Kitchen Tour.

Doug and Denise Zieschang however welcome tour goers through their front door at the historic McKay-Green House at 312 South Third Street.

The stately mansion was built in 1835 for Murdock McKay (1775-1843) New Hanover County Register of Deeds and his wife Jane McMurphy (1775-1847) a native of Scotland. Their son Kenneth Murchison McKay updated the home adding popular Victorian era Italianate elements in 1870.

Dr. William H. Green a Wilmington druggist purchased the property in 1878 and added the north Queen Anne Style wing in 1890 which houses the modern-day kitchen.

Recently renovated the home features four distinctive porches. Coined Four Porches during years as a bed and breakfast it is the only stop on the tour to serve refreshments. ROW house captain Bob Wallen and his docents will also sell raffle tickets culminating in a 5 pm drawing for the 2007 framed original painting   Miss Dolly s Flower Corner   by French artist Katia Campbell.

Miss Dolly the late Dolly Humphrey Pearson a former founding member of ROW will be remembered this year through her family s charitable contribution to the raffle for her colorful garden at the corner of Fifth Avenue and Nun Street and through ROW s designation of Elaine and Larry Neuwirth s Wells-Brown-Lord House garden at 300 South Front Street.

The Neuwirth s Mediterranean-style garden is the first recipient of the Dolly Pearson Beautiful Garden Award. Lush with Italian cypress and palms a stroll through the only garden on the Back Door Kitchen Tour reveals topography articulated in terraces and narrow winding paths scaling the original slope of the river-view property. Look for outdoor sculpture unusual busts and a white ceramic cat climbing a backyard tree which is one of the few elements seen from Ann Street.

Tour tickets are $25 for adults and $15 for children 12 years old and under. Raffle tickets are $5 each or five for $20. Visit www.rowilmington.org for details.