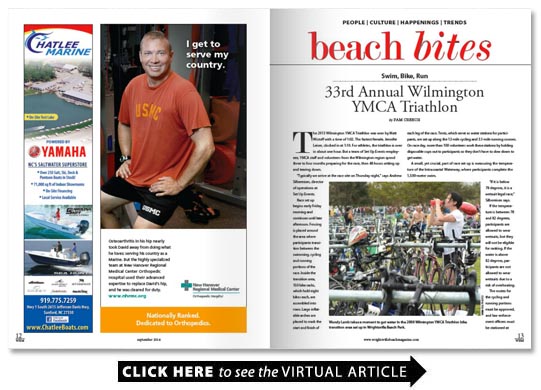 The 2013 Wilmington YMCA Triathlon was won by Matt Wistoff with a time of 1:02. The fastest female Jennifer Leiser clocked in at 1:10. For athletes the triathlon is over in about one hour. But a team of Set Up Events employees YMCA staff and volunteers from the Wilmington region spend three to four months preparing for the race then 48 hours setting up and tearing down.

Typically we arrive at the race site on Thursday night says Andrew Silbereisen director of operations at Set Up Events.

Race set up begins early Friday morning and continues until late afternoon. Fencing is placed around the area where participants transition between the swimming cycling and running portions of the race. Inside the transition area 150 bike racks which hold eight bikes each are assembled into rows. Large inflatable arches are placed to mark the start and finish of each leg of the race. Tents which serve as water stations for participants are set up along the 12-mile cycling and 3.1-mile running courses. On race day more than 100 volunteers work these stations by holding disposable cups out to participants so they don t have to slow down to get water.

A small yet crucial part of race set up is measuring the temperature of the Intracoastal Waterway where participants complete the 1 500-meter swim.

If it is below 78 degrees it is a wetsuit legal race Silbereisen says.

The routes for the cycling and running portions must be approved and law enforcement officers must be stationed at each intersection to ensure the participants  safety.

We have to submit a traffic plan months in advance to the NCDOT. Typically it s a three to four month process Silbereisen says.

Clean up is faster than set up. Set Up Events packs all of its race materials into a 35-foot-long trailer. The goal is to tear down the entire race site by 3:30 pm Saturday leaving the area even cleaner than when the crew and athletes arrived.

The next step of race preparation is T-shirt design.

More than 1 000 race T-shirts swim caps and running bib numbers are printed one month in advance.

After the race Set Up Events saves the extra swim caps for the next triathlon and the T-shirts are given to the Wilmington YMCA.

To register or learn more about the Wilmington YMCA triathlon visit www.setupevents.com 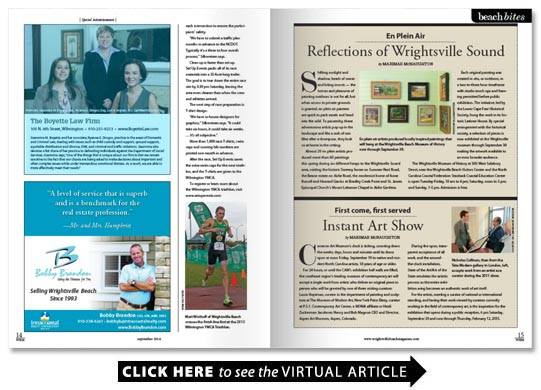 Shifting sunlight and shadow beads of sweat and biting insects — the terrors and pleasures of painting outdoors is not for all but when access to private grounds is granted en plein air painters are quick to pack easels and head into the wild. To passersby these adventurous artists pop up in the landscape and like a rash of rain lilies after a downpour they look so at home in the setting.

Each original painting was created in situ or outdoors in a two-to-three hour timeframe with studio touch ups and framing permitted before public exhibition. The initiative led by the Lower Cape Fear Historical Society hung the work in its historic Latimer House. By special arrangement with the historical society a selection of pieces is now exhibited at the Wrightsville museum through September 30 making the artwork available to an even broader audience.

The Wrightsville Museum of History at 303 West Salisbury Street near the Wrightsville Beach Visitors Center and the North Carolina Coastal Federation Stanback Coastal Education Center is open Tuesday-Friday 10 am to 4 pm; Saturday noon to 5 pm; and Sunday 1-5 pm. Admission is free.

Cameron Art Museum s clock is ticking counting down the weeks days hours and minutes until its doors open at noon Friday September 19 to native and resident North Carolina artists 18 years of age or older.

For 24 hours or until the CAM s exhibition hall walls are filled the southeast region s leading museum of contemporary art will accept a single work from artists who deliver an original piece in person who will be greeted by one of three visiting curators: Laura Hoptman curator in the department of painting and sculpture at The Museum of Modern Art New York Peter Eleey curator at P.S.1. Contemporary Art Center a MOMA affiliate or Heidi Zuckerman Jacobson: Nancy and Bob Magoon CEO and Director Aspen Art Museum Aspen Colorado.

During the open transparent acceptance of all work and the around-the-clock installation State of the Art/Art of the State emulates the artistic process as the entire exhibition wing becomes an authentic work of art itself.

For the artists meeting a curator of national or international standing and having their work viewed by curators currently working in the field of contemporary art is the inspiration for the exhibition that opens during a public reception 6 pm Saturday September 20 and runs through Thursday February 12 2015. 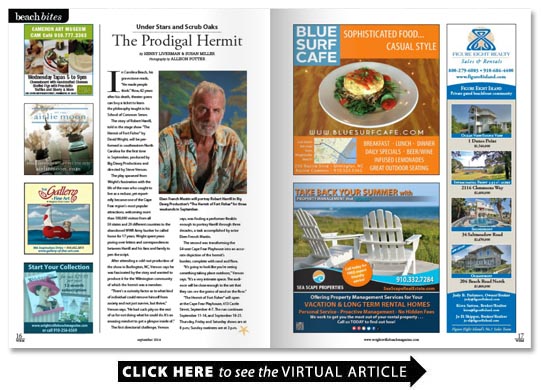 Under Stars and Scrub Oaks

In Carolina Beach his gravestone reads He made people think. Now 42 years after his death theater goers can buy a ticket to learn the philosophy taught in his School of Common Sense.

The story of Robert Harrill told in the stage show The Hermit of Fort Fisher by David Wright will be performed in southeastern North Carolina for the first time in September produced by Big Dawg Productions and directed by Steve Vernon.

The play spawned from Wright s fascination with the life of the man who sought to live as a recluse yet reportedly became one of the Cape Fear region s most popular attractions welcoming more than 100 000 visitors from all 50 states and 20 different countries to the abandoned WWII Army bunker he called home for 17 years. Wright spent years poring over letters and correspondences between Harrill and his fans and family to pen the script.

After attending a sold-out production of the show in Burlington NC Vernon says he was fascinated by the story and wanted to produce it for the Wilmington community of which the hermit was a member.

There s a curiosity factor as to what kind of individual could remove himself from society and not just survive but thrive Vernon says. He had such pity on the rest of us for not doing what he could do. It s an amazing mindset to get a glimpse inside of.

The second was transforming the 54-seat Cape Fear Playhouse into an accurate depiction of the hermit s bunker complete with sand and flora.

It s going to look like you re seeing something taking place outdoors Vernon says. It s a very intimate space. The audience will be close enough to the set that they can see the grains of sand on the floor.

The Hermit of Fort Fisher will open at the Cape Fear Playhouse 613 Castle Street September 4-7. The run continues September 11-14 and September 18-21. Thursday Friday and Saturday shows are at 8 p.m.; Sunday matinees are at 3 p.m.