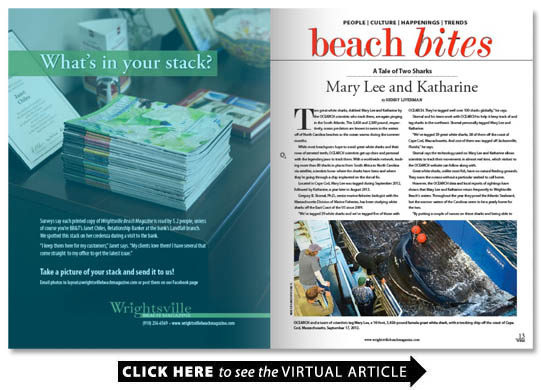 A Tale of Two Sharks: Mary Lee and Katharine

Two great white sharks dubbed Mary Lee and Katharine by the OCEARCH scientists who track them are again pinging in the South Atlantic. The 3 456 and 2 300 pound respectively ocean predators are known to swim in the waters off of North Carolina beaches as the ocean warms during the summer months.

While most beachgoers hope to avoid great white sharks and their rows of serrated teeth OCEARCH scientists get up-close and personal with the legendary jaws to track them. With a worldwide network tracking more than 80 sharks in places from South Africa to North Carolina via satellite scientists know where the sharks have been and where they re going through a chip implanted on the dorsal fin.

Located in Cape Cod Mary Lee was tagged during September 2012 followed by Katharine a year later in August 2013.

Gregory B. Skomal Ph.D. senior marine fisheries biologist with the Massachusetts Division of Marine Fisheries has been studying white sharks off the East Coast of the US since 2009.

We ve tagged 39 white sharks and we ve tagged five of those with OCEARCH. They ve tagged well over 100 sharks globally   he says.

Skomal and his team work with OCEARCH to help it keep track of and tag sharks in the northeast. Skomal personally tagged Mary Lee and Katharine.

We ve tagged 39 great white sharks 38 of them off the coast of Cape Cod Massachusetts. And one of them was tagged off Jacksonville Florida   he says.

Skomal says the technology used on Mary Lee and Katharine allows scientists to track their movements in almost real time which visitors to the OCEARCH website can follow along with.

Great white sharks unlike most fish have no natural feeding grounds. They roam the oceans without a particular seabed to call home.

However the OCEARCH data and local reports of sightings have shown that Mary Lee and Katharine return frequently to Wrightsville Beach s waters. Throughout the year they prowl the Atlantic Seaboard but the warmer waters of the Carolinas seem to be a yearly home for the two.

By putting a couple of names on these sharks and being able to see them on the Internet live it gives people the sense that   Oh this must be a new phenomenon   but it s not. White sharks have certainly utilized the coastal waters of North Carolina and the offshore waters of that state throughout history   Skomal says.

Though sharks are inherently drifters food sources may also be a leading cause of shark migration. A compelling explanation for their return could be opportunistic feeding says Paul Barrington director of husbandry and operations at the North Carolina Aquarium at Fort Fisher.

One reason would definitely be food availability   he says as the waters of the far-southeastern United States are the breeding and calving grounds of the North Atlantic right whale. These seasonal specialties are the prey of sharks like Mary Lee and Katharine this could be what is attracting them to the corridor between Florida and Wrightsville Beach.

The word  opportunistic  is good they do feed opportunistically and they probably ? feed on a very broad spectrum of animals   Skomal says.  There is evidence that they will definitely scavenge adult right whale carcasses. We know they do that. Certainly the timing of their migration would be indicative of something along the lines of taking advantage of right whales as they make their movements to southern calving grounds. We even have evidence they ve fed on newborn right whales as well but we don t believe the white sharks are solely reliant on right whales to sustain themselves. They are likely feeding on a variety of species of fish as well and quite possibly and probably dolphins and porpoises and smaller bait fish like herrings mackerels shrimp and all these different animals that move off the coast of North Carolina.

On average Skomal says great white sharks are probably only swimming 1 to 3 knots or nautical miles per hour.

Although they re capable of swimming in excess of 20 to 25 miles per hour they re not. Even though we re capable of sprinting it doesn t make sense for us to do it all the time   he says.  The sharks spend most of their time moving relatively slowly but if they re moving at 1 to 3 knots they still cover a lot of ground over time moving from Massachusetts down to Florida in weeks or months. But for a fish that s a lot of area to travel and that s a pretty good pace.

The last time Mary Lee pinged of off the Wrightsville Beach coast was in October 2013; Katharine was logged in December 2013 off of the Outer Banks. As air and ocean temperatures rise steadily this summer the great whites may return to Wrightsville s waters. To see where Mary Lee and Katharine are virtually go to www.ocearch.org/tracker 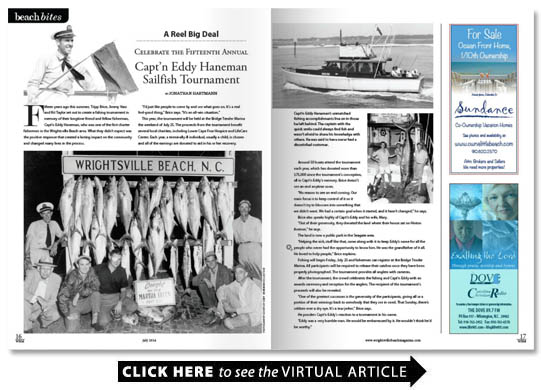 Fifteen years ago this summer Tripp Brice Jimmy Vass and Kit Taylor set out to create a fishing tournament in memory of their longtime friend and fellow fisherman Capt n Eddy Haneman who was one of the first charter fishermen in the Wrightsville Beach area. What they didn t expect was the positive response that created a lasting impact on the community and changed many lives in the process.

I d just like people to come by and see what goes on. It s a real feel-good thing   Brice says.  It s an all-win situation.

This year the tournament will be held at the Bridge Tender Marina the weekend of July 25. The proceeds from the tournament benefit several local charities including Lower Cape Fear Hospice and LifeCare Center. Each year a terminally ill individual usually a child is chosen and all of the earnings are donated to aid in his or her recovery.

Around 50 boats attend the tournament each year which has donated more than $75 000 since the tournament s conception all in Capt n Eddy s memory. Brice doesn t see an end anytime soon.

No reason to see an end coming. Our main focus is to keep control of it so it doesn t try to blossom into something that we didn t want. We had a certain goal when it started and it hasn t changed   he says.

Out of their generosity they donated the land where their house sat on Hinton Avenue   he says.

The land is now a public park in the Seagate area.

Helping the sick stuff like that came along with it to keep Eddy s name for all the people who never had the opportunity to know him. He was the grandfather of it all. He loved to help people   Brice explains.

Fishing will begin Friday July 25 and fishermen can register at the Bridge Tender Marina. All participants will be required to release their catches once they have been properly photographed. The tournament provides all anglers with cameras.

After the tournament the crowd celebrates the fishing and Capt n Eddy with an awards ceremony and reception for the anglers. The recipient of the tournament s proceeds will also be revealed.

One of the greatest successes is the generosity of the participants giving all or a portion of their winnings back to somebody that they see in need. That Sunday there s seldom ever a dry eye. It s a tear jerker   Brice says.

He ponders Capt n Eddy s reaction to a tournament in his name.

Eddy was a very humble man. He would be embarrassed by it. He wouldn t think he d be worthy. 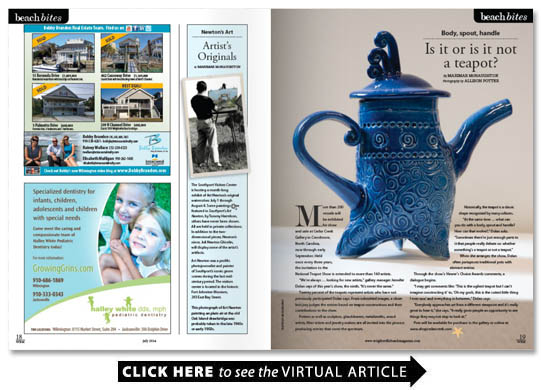 Body spout handle: Is it or is it not a teapot?

More than 200 vessels will be exhibited for show and sale at Cedar Creek Gallery in Creedmore North Carolina now through early September. Held once every three years the invitation to the National Teapot Show is extended to more than 160 artists.

We re always looking for new artists   gallery manager Jennifer Dolan says of this year s show the ninth.  It s never the same.

Twenty percent of the teapots represent artists who have not previously participated Dolan says. From submitted images a close-knit jury judges the entries based on teapot constructions and their contributions to the show.

Potters as well as sculptors glassblowers metalsmiths wood artists fiber artists and jewelry makers are all invited into the process producing entries that cover the spectrum.

Historically the teapot is a classic shape recognized by many cultures.

At the same time what can you do with a body spout and handle? How can that evolve? Dolan asks.  Sometimes there re just enough parts to it that people really debate on whether something s a teapot or not a teapot.

When she arranges the show Dolan often juxtaposes traditional pots with abstract entries.

I may get comments like:  This is the ugliest teapot but I can t imagine constructing it  to   Oh my gosh this is the cutest little thing I ever saw  and everything in between   Dolan says.

Everybody approaches art from a different viewpoint and it s really great to hear it   she says.  It really gives people an opportunity to see things they may not stop to look at.

Pots will be available for purchase in the gallery or online at www.shopcedarcreek.com