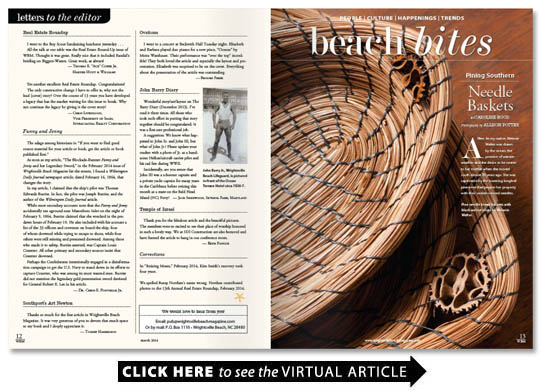 New Jersey native Melanie Walter was drawn by the ocean the promise of warmer weather and the desire to be nearer to her mother when she moved south almost 30 years ago. She was captivated by the towering longleaf pine trees that pepper her property with their umber-colored needles.

Walter makes baskets and sculpture pieces out of the pine needles she collects from the yard of her Wilmington North Carolina home. In 1993 she taught herself the traditional technique of coiling and shaping the needles into baskets by reading books.  Walter is now a full-time artist showcasing her basketry work in more than 60 galleries around the United States.

She begins a piece by collecting the pine needles sorting and cleaning them bundling the needles into ropes and then coiling them into shapes. She also incorporates pottery into her baskets and bowls to enhance the texture and pattern of her creations.

Clay was my first love so I wanted to incorporate them together Walter says. I want to make the pine needles speak and sing.

Walter has sketchbooks full of ideas. She plays with different techniques and organic materials to make works of art. Recently she has been experimenting with more sculptural pieces such as whimsical woven pine needle fish and trees. She gathers inspiration from other artists and the patterns she sees in the natural world.

Seminole tribes living in Southern Florida where longleaf pines were plentiful are thought to be the first to develop the craft Walter says. The technique was adopted in other areas of the South in the mid-to-late 1800s.

Walter is committed to preserving longleaf pine trees and the art of pine needle basketry. She is a member of the Longleaf Alliance and teaches basket-weaving classes at the Cameron Art Museum and Poplar Grove Plantation.

I love the smell the way they grow the beauty of their needles Walter says. I cant see myself ever wanting to do anything else. I want to continue demonstrating and teaching so that pine needle basketry is not a lost art.

By D.J. Bernard and William McKenna

Its easy to be seduced by plump vine-ripened tomatoes which is why they are a popularly home-harvested fruit. Home growing is the easiest way to glean the most delicious tomatoes nature can produce and the process is easy with some basic know-how.

In Southeastern North Carolina starting early is the most important thing to remember says Charlotte Glen horticulture instructor at Pender County North Carolina State Cooperative Extension. Glen has been educating the public for years about growing tomatoes in the Cape Fear region.

The hot climate makes it possible to plant tomatoes outside in containers or in the ground as early as the end of March Glen says. Plant them by the end of April so they can start making fruit before it gets too hot. After summertime temperatures consistently reach the 90s tomato plants are easily stressed and may not produce new blossoms. Tomatoes already on the vine may wither.

An early start is doubly important when growing from seed. Tomato seeds need to be ready for transplanting outdoors approximately six weeks after the last frost.

Ryan Olsen store manager of Progressive Gardens in Wilmington says seeds should be sown in a special germinating or seed-starting mix a blend of lightweight growing mediums. Potting soil may alternately be used but it is often too rich in fertilizers for the delicate seeds.

It would be like giving a baby a steak he says.

Recycled egg cartons make great containers for starting with enough room for one tomato seed per cell. Once the seeds are planted spritz with water then cover them with plastic wrap or a humidity dome to help retain moisture.

Humidity and temperature are the factors that regulate the seed sprouting Olsen says.

Place the seed trays in a warm spot about 70 degrees. Once the first sprout nubs are noticed within about four to ten days depending on the tomato variety the plants should be uncovered and moved into direct indoor sunlight.

Starting from seed can be difficult Glen explains. You need lots of direct light and most homes just dont get enough light to grow strong plants.

To supplement the natural light that many homes lack lights can help establish an indoor growing area. Olsen says that fluorescent bulbs are the most commonly used for home growing and T5 bulbs which are five-eighths inches in diameter are most efficient for plant growth. A set of T5 tubes are easy to use plug into a regular outlet cost about $34 and will support as many as 72 seedlings.

When using fluorescent lights allow six inches between the bulbs and the tops of the sprouts. Once the seedlings have reached two inches in height they can be transferred into larger pots and allowed to bask under the grow lights until the last threat of late winter frost has passed.

While growing from seed does take a bit of patience it allows the home gardener to try dozens of varieties that are not regularly available in garden centers.

For the beginning tomato grower Glen says cherry varieties are the easiest. The smaller fruits mean theyll mature enough for a good crop before the summer heat and humidity set in.

Large varieties that thrive in North Carolinas heat are Amelia and Primo Red. Both are resistant to Southern climate diseases like tomato spotted wilt virus which Glen says is the most serious regional tomato plant disease.

Glen recommends transplanting seedlings with potting soil in containers or raised beds. The sandy soil of the Southeast can be difficult to work with she says. In addition the native soil in this area is rife with root knot nematodes. These microscopic round worms can infect plants leaving them stunted with yellow leaves flower droppings and wilted poor growth. Amelia Celebrity and Better Boy tomatoes are nematode resistant.

Take care of these details and let nature do the rest. Sun soil and rainwater will produce the fruit that epitomizes the flavor of summer.

Theyve all been hotel guests at the Blockade Runner Beach Resort in Wrightsville Beach North Carolina which celebrates the big five-o its golden anniversary this year. Its the preferred layover for Hollywood stars while filming movies in Wilmington but this hotels reputation is built on the ordinary stories of repeat guests.

On her first day behind the front desk marketing manager Jenny Yarborough says she overheard a man in his 50s saying something about being separated from his brother as a child in Russia and how any minute his brother whom he hadnt seen in forty-some years would come walking through the doors. This is the place he chose to meet his brother.

The Blockade Runner is more than a hotel Yarborough says. Its the place where people meet for the first time and fall in love. Its where they come to grieve after 57 years of marriage after their husband passes away. For so many people this is the place where they see the ocean for the first time and realize just by looking at the horizon that the world is vast. And each year they come back to remember and to reconnect with their memories. There arent that many places where in 150 rooms there is such an array of emotions.

The original Blockade Runner built 50 years ago contained 120 guest rooms all with a view of either the Atlantic Ocean or Banks Channel and an elaborate main dining hall dubbed the Robert E. Lee Ballroom named after the infamous blockade-runner. All of the hotels meeting rooms are named for blockade-running ships that steamed past this part of the North Carolina coast en route to the Cape Fear River and the Port of Wilmington.

In an archived Star News article from March 22 1964 (Vol. 34 No. 30) Lawrence Lewis Jr. writes The Blockade Runner is well worth the pride of every citizen. Not only for the influence it will have as a tourist attraction to our fine beach but for the teamwork by our business and professional people by our elected officials and by many other individuals that have made it possible.

One year after it opened the hotel was upgraded and expanded adding more guest rooms a coffee shop convention halls and other modern amenities. In 1971 the property was sold to Four Seasons Management Services Inc. — owned by a group of doctors led by Dr. Joseph Baggett of Fayetteville and Dr. John Dennis of Maryland. The family business is now owned by their heirs and is operated by Bill Baggett and his sister Mary Baggett Martin.

The rooms once appointed with mid-century modern d?cor have evolved continuously. Generally we rehab two floors a year by changing the furniture televisions and the styling of the room Bill Baggett explains. We havent had to make any structural changes — the structure is and has been completely sound.

From Soot to Swank

There has been a hotel in this location for 117 years. The Blockade Runner also has a rich history intertwined with that of the Cape Fear coast.

The property where the Blockade Runner Beach Resort now stands was first established as a double-waterfront hotel in 1897 facing both the Atlantic Ocean and Banks Channel called the Seashore Hotel. This hotel stood until 1918 when a fire spread through the building leaving it in ashes.

After the Seashore Hotel burned all that remained was the steel pier which eventually was washed away in 1921. However it wasnt long until the value of the property was remembered and in 1922 a charter was issued to develop and build a state-of-the-art hotel in its place — the Ocean Terrace Hotel.

Without insurance or outside help the owners were unwilling and unable to make the repairs needed to bring the Ocean Terrace back to its former glory. So the structure stood devastated by the storm as a reminder of the power of coastal hurricanes until 1955 when the remains burned to the ground leaving nothing but the foundation in its ash.

After the hurricanes and storms the beaches were all struggling financially says Bill Baggett one of the Blockade Runners owners.  There wasnt FEMA there wasnt support and there wasnt even flood insurance.

The property was purchased for $40 000 by the former Wrightsville Beach Mayor Michael C. Brown from the town of Wrightsville Beach. He subsequently deeded the property to Lawrence Lewis Jr. a former Wilmingtonian who had relocated to St. Augustine with his family and eventually became a well-known property developer. Before investing in the Blockade Runner Lewis had successfully built and developed the Peace & Plenty Resort in George Town Great Exuma Island in the Bahamas. Lewis opened the Blockade Runner Motor Hotel in 1964.