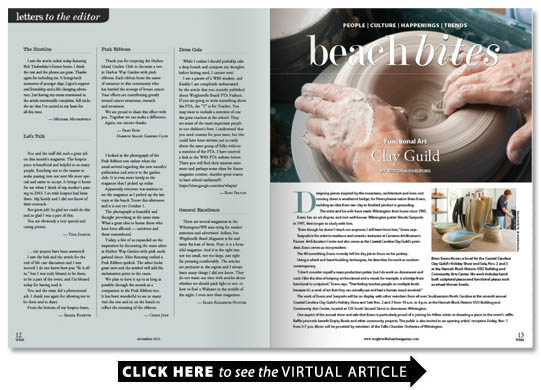 Designing pieces inspired by the mountains architecture and even rust running down a weathered bridge for Pennsylvania native Brian Evans molding an idea from raw clay to finished product is grounding.

The artist and his wife have made Wilmington their home since 1995.

Evans has an art degree and met well-known Wilmington potter Hiroshi Sueyoshi in 1997 then began to study with him.

Even though he doesnt teach me anymore I still learn from him Evans says.

The 40-something Evans recently left his day job to focus on his pottery.

Using a wheel and hand-building techniques he describes his work as modern- contemporary.

I dont consider myself a mass-production potter but I do work on dinnerware and such. I like the idea of keeping art functional and a vessel for example is a bridge from functional to sculptural Evans says. That feeling touches people on multiple levels because its a work of art that they can actually use and had a human touch involved.

The work of Evans and Sueyoshi will be on display with other members from all over Southeastern North Carolina at the seventh annual Coastal Carolina Clay Guilds Holiday Show and Sale Nov. 2 and 3 from 10 a.m. to 4 p.m. at the Hannah Block Historic USO Building and Community Arts Center located at 120 South Second Street in downtown Wilmington.

One aspect of the annual show and sale that Evans is particularly proud of is joining his fellow artists in donating a piece to the events raffle. Raffle proceeds benefit Empty Bowls and other community projects. The public is also invited to an opening artists reception Friday Nov. 1 from 5-7 p.m. Music will be provided by members of the Tallis Chamber Orchestra of Wilmington.

Admission is free to both events. For more information visit www.coastalcarolinaclayguild.org

The Wrightsville Beach Ninth Annual Turkey Trot 5k is providing families with a Thanksgiving tradition that is not so traditional. On Thanksgiving morning November 28 the runners — some serious and some decked in silly turkey-inspired fashions — will gather in Wrightsville Beach Park to race finishing in plenty of time to prepare for a holiday meal. Proceeds go to Cape Fear Habitat for Humanity which sponsors the event.

Nancy Faye Craig 69 is one of the most well-known competitors and plans to attend this year as she has for the past four years: dressed as a full-grown turkey.

I love it Craig says. Dressed up I see smiles from ear to ear. People want to know if I will take a picture with them. I feel like a celebrity.

It was local Realtors Dick and Sandy Beals who began the Turkey Trot in Wilmington after moving from New York where Dick and their son were accustomed to running as a team during their hometown Turkey Trot. Missing the tradition the couple engaged Wilmington-based sponsors and about 100 runners to hold the first Turkey Trot 5k with runners times tracked by Sandy Beals kitchen timer.

It just grew bigger every year Sandy Beals says. We had to pass the baton. Being Realtors Habitat for Humanity was an easy choice. People can both run and help to build homes for people who may not have had that option otherwise.

With Habitats help the Turkey Trot draws a normal registration of more than 2 000 people many of whom participate as family-based teams. Mother-daughter and father-son teams are among the most popular.

People thanked us for beginning a family tradition. But the best part in the first years was when we handed that check over to Habitat for Humanity Sandy Beals says.

Kitty Yerkes Habitats development director is overjoyed with the attention the race has garnered.

Its fabulous. It gets families out of the kitchen for a little bit and ends early so that they still have their holiday. Plus they can say they helped build a house Yerkes says. Theres something for everyone.

Friendly competitors Skip Wilson and Paula Sturdy have handed the Best in Show title and trophy back and forth for their lavish lighted boat decorations displayed during the North Carolina Holiday Flotilla. After months of labor and thousands of dollars mechanical contraptions and lights come together to transform their large power boats into extravagant lighted parade floats.

The techniques they use vary but they both have years of memories from the event that comes shortly after the Thanksgiving holiday.

Wilson the 2012 winner began entering the boat parade in 1987. He is Catholic and wanted to decorate away from the home out of respect for his Jewish wife and her family.

I started doing it when my girls were young Wilson says. Its fun to see the kids to hear the cheers when you come around by the dock. People are getting enjoyment out of what youre doing. Every year I say Im not doing it. I say it every year — because it is a lot of work a lot of money — but I do it every year.

He typically spends $2 000 to $3 000 on lights and decorations for The Bottom Line his grandfathers boat a 1966 36-foot Hatteras Sport Fisher.

Sturdy grew up sailing the seven seas with her father and even cut up his sails to make decorations like Christmas trees in his honor.

He should have been born a century ago as a pirate Sturdy says.

She first entered her 38-foot Sportfish Tiara Reel Hot five years ago when the Wilmington Invasion of the Pirates was canceled.

I decided we will just be The Pirates Who Stole Christmas and thats where it went Sturdy says.

The 2008 flotilla also happened to coincide with bad weather.

The rain quit and I almost started crying Sturdy says. I knew the minute the rain quit the wind was coming. Thats where the front blows through. We were fine until we made the turn up into Motts Channel going toward the bridge.

Then they got hit with 25 knots on the nose and the pirate skull went overboard.

Michael [Satrazemis] and Van [Marr] took turns going on the buggy top and holding that pirate skull the rest of the way Sturdy says.

She calls her husband Van Marr a trooper for his help. The inspiration for her themes comes from her parents Dave and Joyce Sturdy.

She and Marr decorate their boat docked behind their home in Wrightsville Moorings.

In 2012 she spent three months of nightly labor on her garage floor to create Charlie the tuna a key part of the Hooked on Catchn a Christmas Wish theme.

Wilson constructs most of the decorations at his home in Raleigh then transports them on a truck to Wilmington to assemble.

His crew starts early Friday morning the day before the flotilla boat parade.

If were lucky were done by noon on Saturday he says.

One of his favorite memories is from 2010 with his theme Dragon Pulls Santa.

It looked so real like it was flying down the waterway Wilson says.

The worst was the year of Batman when his boat with more than 700 helium balloons never made it past the judges. Coming down Banks Channel it started to rain and the Joker fell into the water.

Then as they were moving Wilson lost hydraulics and steering so the U.S. Coast Guard had to bring him out of the parade and back to shore.

Sturdys and Wilsons crews have changed throughout the years or as Wilson says friends have floated in and out.

The competition is getting hotter Wilson says.  We have kind of upped the ante over the years. We were the first ones that actually introduced music to it PA systems.

Then they started to incorporate movement.

Covering the walls of Sturdys dining room are former flotilla posters and photo collages. Both Wilson and Sturdy document the annual experiences through traditional and digital scrapbooks. Wilson remembers when the Best in Show title meant a trophy and bragging rights less than a decade ago. Prizes like international trips and a Carolina Skiff have since entered the mix.

Skips been winning. Ive been winning Sturdy says. But I think its bringing in a lot of new blood.

Transitioning from her trolley voice First up. Station one. Second stop. Lumina Station into a rendition of Judy Garlands Clang clang clang went the trolley of The Trolley Song Sturdy describes how her mother always talked about riding the trolley to Wrightsville Beach when she was young which is how the 2011 Trolley #9 theme came to win Best In Show.