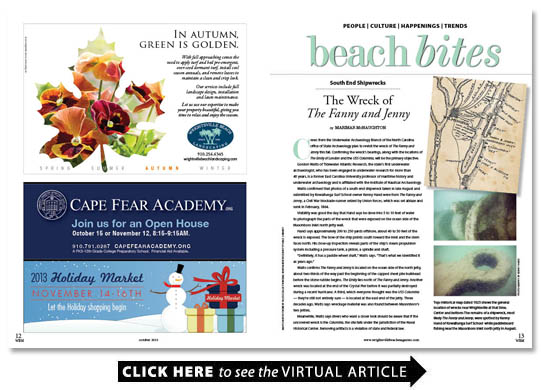 The Wreck of The Fanny and Jenny

Crews from the Underwater Archaeology Branch of the North Carolina office of State Archaeology plan to revisit the wreck of The Fanny and Jenny this fall. Confirming the wrecks bearings along with the locations of The Emily of London and the USS Columbia will be the primary objective.

Watts confirmed that photos of a south end shipwreck taken in late August and submitted by KowaBunga Surf School owner Kenny Hand were from The Fanny and Jenny a Civil War blockade-runner seized by Union forces which was set ablaze and sunk in February 1864.

Visibility was good the day that Hand says he dove into 5 to 10 feet of water to photograph the parts of the wreck that were exposed on the ocean side of the Masonboro Inlet north jetty wall.

Hand says approximately 200 to 250 yards offshore about 40 to 50 feet of the wreck is exposed. The bow of the ship points south toward the inlet and the stern faces north. His close-up inspection reveals parts of the ships steam propulsion system including a pressure tank a piston a spindle and shaft.

Definitely it has a paddle wheel shaft Watts says. Thats what we identified it as years ago.

Watts confirms The Fanny and Jenny is located on the ocean side of the north jetty about two-thirds of the way past the beginning of the capped sheet pile bulkhead before the stone rubble begins. The Emily lies north of The Fanny and Jenny. Another wreck was located at the end of the Crystal Pier before it was partially destroyed during a recent hurricane. A third which everyone thought was the USS Columbia theyre still not entirely sure is located at the east end of the jetty. Three decades ago Watts says wreckage material was also found between Masonboros two jetties.

Meanwhile Watts says divers who want a closer look should be aware that if the uncovered wreck is the Columbia the site falls under the jurisdiction of the Naval Historical Center. Removing artifacts is a violation of state and federal law.

So it was no surprise when Kenny Hand called last Wednesday Aug. 28 to report his underwater find. It was not the 5-foot barracuda he saw that had him so excited.  Hand of KowaBunga Surf School had been paddleboard fishing near the Masonboro Inlet north jetty when he saw something below the surface that prompted a series of free dives for a closer look: the remains of a shipwreck.

Later that afternoon his photos were sent via email to Nathan Henry of the states underwater archaeology branch at Fort Fisher in Kure Beach. Henry who has been stationed in Beaufort for the continued excavation of Blackbeards Queen Annes Revenge forwarded the photos to archeologist and scholar

During telephone interviews on Aug. 29 and 30 Watts said it appeared that the exposed wreck is that of the Civil War blockade-runner The Fanny and Jenny.

Many believe The Fanny and Jenny to have sunk near the location of Crystal Pier farther north along the Wrightsville Beach strand. Watts said thats not the case and explained there are three shipwrecks of Civil War era vessels in the same vicinity south of Crystal Pier and near Masonboro Inlets north jetty. In addition to The Fanny and Jenny The Emily of London and The Dee which were run aground by Union forces set ablaze and sunk in February 1864 there is the USS Columbia which accidentally ran aground and sank in January 1863.

Were not sure exactly where the third one is Watts said by telephone on Aug. 29. There is something at the end of the north jetty we dont know for sure if thats the wreck.

Watts confirmed that the wreck Hand found is The Fanny and Jenny.

We still dont know where the Columbia is. If the bow of the ship is exposed a lot more is exposed than its ever been and well probably be up there � sometime this fall Watts said on Aug. 30.

We want to get in there and take a look at it before theres any sort of beach nourishment or changes in the environment that covers it back over Watts said.

Taste of the Town

Held this year at the MarineMax Harbor Island Marina and Showroom the event should draw around 500 people says event  cofounder Lisa Weeks . Event guests will mingle in the MarineMax showroom and around the marina boarding boats to catch some televised college football action.

With the rock reggae and R&B sounds of the Blue Tang Bandits providing the soundtrack for the evening the main attraction will be the food. Participating restaurants from last years event like Tower 7 Bluewater Grill the Oceanic 22 North Mellow Mushroom and the Blockade Runner Beach Resorts East Oceanfront Dining and the Holiday Inn Resort will return along with a few new additions like Shell Island Resort.

South Beach Grill owner and event cofounder John Andrews says the inaugural event last year provided a boost for the beach restaurants 20 of which are within three miles of the heart of Wrightsville Beach.

I think it has helped out the restaurants as a community instead of as individuals Andrews says. Everybody plays a part they all do an excellent job and a rising tide lifts all boats. That night we showed there was a really high tide.

While the participating restaurants experienced a swell in awareness at last years event the waterways around Wrightsville Beach also swelled from Superstorm Sandy that passed that evening. Despite the torrential downpours Weeks says the level of community support proved that the event could work again.

It just brings the community together for a great time and celebrates all the great restaurants we have Weeks says. Hopefully it helps them keep their traffic up in the offseason � and it showcases their cuisine so the locals will support them in the offseason when the tourists are gone.

Judges for the Best In Show award will be Eric Gephardt lead instructor for the Chefs Academy of North Carolina Competition Dining NC founder Jimmy Crippen Cape Fear Community College Hospitality Management faculty member Diane Withrow WWAY Good Morning Carolina anchor Randy Aldridge and Wrightsville Beach Mayor David Cignotti. Ticket prices include tastings of the food and beverages provided by each vendor and prices range from $45 for Wrightsville Beach Foundation members to $50 for adults older than 21. Benefitting from the event will be the Weekend Meals on Wheels program and the downtown Wrightsville Beach Beautification Project.

Led by red hat survivors the Cape Fear Heart Walk provides an opportunity for families
affected by heart disease and stroke to come together and raise money for research and advocacy programs.

The three-mile walk will take place on Saturday October 19 at 10 a.m. at the University of North Carolina Wilmington athletic track field across from Trask Coliseum.

We dont just hit one segment of the population because heart disease is the No. 1 killer of men and women and of all ages Miller says. Theres just no one I know thats not affected by heart disease and stroke whether its yourself or your family.

Congenital heart defects are the most common birth defects and strokes are the No. 4 cause of death in the United States.

One thing at this heart walk that were really going to focus on is strokes Miller says. The African American population 34 to 54 is more susceptible to strokes than any other population.

A childrens area advocacy tent emcees and UNCW dancers to entertain participants at the event. Plus there will be a T-shirt contest and spirit contest along with five Wilmington Health Lifestyle Change Awards given to nominated community members who have taken control of their health.

Registration is free and available online but participants are encouraged to fundraise. Gates open at 8 a.m. the day of the event and festivities and registration will begin at 9 a.m.