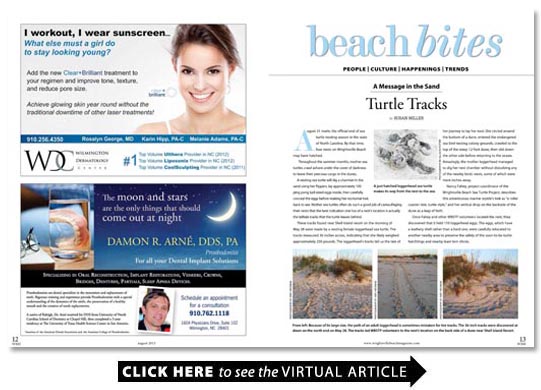 A Message in the Sand

August 31 marks the official end of sea turtle nesting season in the state of North Carolina. By that time four nests on Wrightsville Beach may have hatched.

Throughout the summer months mother sea turtles crawl ashore under the cover of darkness to leave their precious cargo in the dunes.

A nesting sea turtle will dig a chamber in the sand using her flippers lay approximately 100 ping pong ball-sized eggs inside then carefully conceal the eggs before making her nocturnal trek back to sea. Mother sea turtles often do such a good job of camouflaging their nests that the best indication one has of a nests location is actually the telltale tracks that the turtle leaves behind.

These tracks found near Shell Island resort on the morning of May 28 were made by a nesting female loggerhead sea turtle. The tracks measured 36 inches across indicating that she likely weighed approximately 250 pounds. The loggerheads tracks tell us the tale of her journey to lay her nest: She circled around the bottom of a dune entered the endangered sea bird nesting colony grounds crawled to the top of the steep 12-foot dune then slid down the other side before returning to the ocean. Amazingly the mother loggerhead managed to dig her nest chamber without disturbing any of the nearby birds nests some of which were mere inches away.

Nancy Fahey project coordinator of the Wrightsville Beach Sea Turtle Project describes this adventurous marine reptiles trek as a roller coaster ride turtle style and her vertical drop on the backside of the dune as a leap of faith.

Once Fahey and other WBSTP volunteers located the nest they discovered that it held 159 loggerhead eggs. The eggs which have a leathery shell rather than a hard one were carefully relocated to another nearby area to preserve the safety of the soon-to-be turtle hatchlings and nearby least tern chicks.

All Along the Watchtower

When Tulsa Oklahoma native Richard Neal first saw the Frying Pan Tower on the US governments General Services Administration auction website he didnt know he would find himself in the GSA office months later haggling over the towers price with a man in a brown three-piece suit.

After winning the tower as the only bidder at just more than $11 000 on its second time listed for auction Neal says the man in the brown suit informed him that the towers undisclosed minimum market value had to be met. A few rounds of negotiations later Neal walked out $85 000 lighter and the proud owner of Frying Pan Tower.

The long and short of it is I had no idea what I was getting into Neal says. I had never even been out in the ocean deep sea fishing.

Three years later the tower is now open as a bed and breakfast for the adventurous and young at heart with eight single or double twin bed rooms a full kitchen heating and air hot and cold water Internet and a variety of activities for passing the time 34 miles offshore from Wrightsville Beach.

The only thing that is different about it than a beach house is there are absolutely zero insects which is really nice Neal laughs. It is also surprisingly peaceful and quiet; when you are on the beach you hear the pounding of the waves but out here we hear the lapping of waves against the legs. It has astonishing views because when you are 85 feet above the water you can see down in it very well so you can see all the wildlife.

For those hoping to observe the wildlife up close Neal says at 50 feet deep the waters of the Atlantic underneath the tower are great for free diving scuba diving and spearfishing on calm days. Fishing with rod and reel from the towers deck is also an option. The fishing is amazing out here and we have the ability to lower people right down to the water for diving using a special dive lift basket we had made he says. You can spearfish pull in some lobsters and come right back up.

Neal says topside visitors can play corn hole shoot pool and even hit custom golf balls made completely of fish food. Some guests have even brought equipment to shoot skeet off the deck.

When the sun sets the lack of light pollution provides a clear view of the night sky.

Something in it appeals to the kid in everyone Neal says. You are on a tree house and you get to see things you never could see and yet you are safe and secure because you know it has lasted through a bunch of hurricanes and you still have the amenities of home.

The towers continuing renovations are funded by three-day minimum stays which range from $300 to $500. With the higher rate Neal will get you there and back.

First lit in 1964 the Frying Pan Shoals Light Station was occupied by the United States Coast Guard until 1979 when it became an automated light tower.

Neal says he is pushing to have all of the renovation work complete by the towers 50th anniversary in November 2014.

Hornsby and the Noisemakers

As sunlight pierces a mossy canopy of cypress trees in scattered broken laser-like beams that paint stage right patrons are ushered in by a breeze that sends rippling currents to an otherwise motionless body of water. Its showtime at Greenfield Lake Amphitheater.

Now an attractive venue to promoters of big names in the music industry it took million-dollar-plus renovations to match the infrastructure to the aesthetic level of its surroundings.

We [Shakespeare on the Green] are the reason for the renovations says Cherri McKay managing producer for Cape Fear Shakespeare. Our dressing rooms were these two Flintstone-type buildings down by the lake. We had no air conditioning or anything; wed build our set on the platform and have lawn chairs behind it. We loved it then but of course we like it now too.

Revamped stage concessions seating and dressing areas are dedicated to Hugh Morton Wilmington native and longtime proprietor of Grandfather Mountain. Morton was a renowned photographer led the campaign to bring the battleship to Wilmington and was the first president of the Azalea Festival which is said to have been inspired in part by the spring azaleas at Greenfield Lake.

On August 2 the amphitheater will welcome an act of broad musical scope and influence Bruce Hornsby and the Noisemakers. Hornsbys music has taken on numerous transformations most achieving success most well-received by critics and all progressive and forward-thinking. It was only relatively recently that he began making noise with his current assemblage of band mates. Together they combine elements of a range of genres that tend to draw a range of listeners from those who most appreciate Hornsbys time spent touring with the Grateful Dead to a younger generation who likely associate him with Tupac Shakur. Sampled by several rap artists most notably Shakur the 1986 chart topper The Way It Is remains his biggest hit.

Hornsby tickets are available at Gravity Records Momentum Surf and Skate and online at www.greenfieldlakeamphitheater.com. Dont be discouraged if it sells out.

The tailgaters will be right over there McKay says pointing to the empty lot across the street. And the occasional kayak and canoe-bound concertgoer is known to catch the action as well.