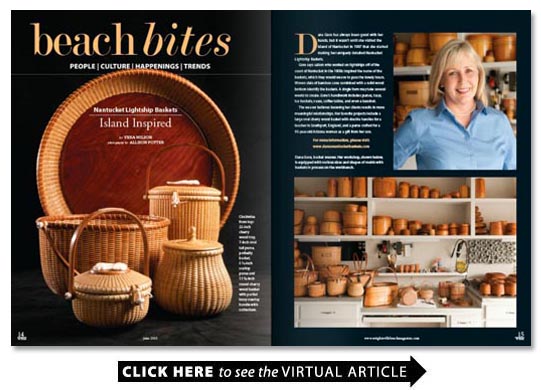 Dana Gore has always been good with her hands but it wasnt until she visited the island of Nantucket in 1997 that she started making her uniquely detailed Nantucket Lightship Baskets.

Gore says sailors who worked on lightships off of the coast of Nantucket in the 1800s inspired the name of the baskets which they would weave to pass the lonely hours. Woven slats of bamboo cane combined with a solid wood bottom identify the baskets. A single item may take several weeks to create. Gores handiwork includes purses trays   ice buckets vases coffee tables and even a bassinet.

The weaver believes knowing her clients results in more meaningful relationships. Her favorite projects include a large oval cherry wood basket with double handles for a teacher in Southport England and a purse crafted for a 95-year-old Arizona woman as a gift from her son.

For almost 30 years truckloads of live Maine lobsters have made the  overnight trek to North Carolina the first weekend in June when theyre steamed and served with corn potatoes and sausage during the Church  of the Servant Episcopals annual Lobster Fest.

Reverend Joe Cooper started the parties: the Lobster Fest which take place during the day in the church courtyard on Oriole Drive and the Harbor Island Block Party by twilight under the tree-lined canopy of Live Oak Drive.

It started off with just our little neighborhood in Harbor Island then to the whole  of Harbor Island and then we just expanded it to whoever wanted to come Cooper  says. He never knew the Harbor Island tradition would evolve to the point of steaming 200 to 300 lobsters each year.

Now retired from the ministry Cooper lives on the Albemarle Sound about three hours from his Harbor Island home and makes the journey every year to see the block lined with twinkling lights draped through the trees driveways converted to dining rooms and tent-covered tables lined with paper tablecloths and newspaper.

When you open that lobster the juice goes everywhere Cooper says.

Cooper says everyone comes as they are bearing a covered dish or desserts to complement the fresh lobster cooked on site throughout the evening.

We have some wonderful covered dishes desserts salads and that sort of thing but  we love lobster Cooper says.

Both the June 8 block party and the 29th annual Lobster Fest benefit and promote the outreach and services of Church of the Servant Episcopal.

Coming from a long line of shellers Margaret Turner followed her mother grandmother and aunts footsteps as she grew up along the North Carolina coast. Her home is filled with shells from combing the sands of her favorite beaches which include Wrightsville Beach Masonboro and Bald Head Island.

Because of the tides her best shelling times follow a full or new moon but the shores are prime for picking after a heavy storm or  hurricane not that she wishes for another. Turner says after Irene came ashore in 2011 she collected hundreds of perfect sand dollars   sea urchins and more.

Its just like a treasure trove that washes up on the sand every time I found a sand dollar I felt like I found a piece of treasure she says.

Turner took photos of her ongoing collections and pinned them to a board with other favorite hobbies and passions. Eventually Margaret Turner Designs came to fruition combining her love of shells and fashion sense into a line of beach-inspired scarves that include cotton voile and silk.

I always had this idea that I would design scarves and cardigans one day because I always have to have them to keep warm Turner says.

With an MBA from Rice University Turner says it took time and soul searching to realize that scarves the simplest form of cut and sew were the ideal pursuit.

Once I made that first scarf everything moved forward she says.

Turners process begins with taking photographs of her shells which are digitally printed onto the fabrics in Durham North Carolina and sent back to Turner who cuts and sews the scarves herself. The sand dollar is her favorite.

Turners scarves are currently sold at The Fishermans Wife on  Airlie Road and online at www.margaretturnerdesigns.com