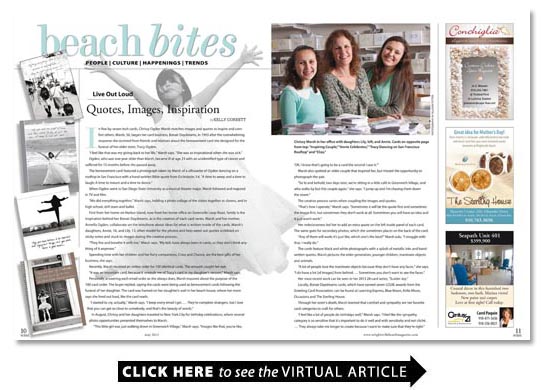 In five-by-seven-inch cards Chrissy Ogden Marsh matches images and quotes to inspire and comfort others. Marsh 50 began her card business Bonair Daydreams in 1993 after the overwhelming response she received from friends and relatives about the bereavement card she designed for the funeral of her older sister Tracy Ogden.

I feel like that was my giving back to her life Marsh says. She was so inspirational when she was sick.

Ogden who was one year older than Marsh became ill at age 23 with an unidentified type of cancer and suffered for 15 months before she passed away.

The bereavement card featured a photograph taken by Marsh of a silhouette of Ogden dancing on a rooftop in San Francisco with a hand-written Bible quote from Ecclesiastes 3:4 A time to weep and a time to laugh; A time to mourn and a time to dance.

When Ogden went to San Diego State University as a musical theater major Marsh followed and majored in TV and film.

We did everything together Marsh says holding a photo collage of the sisters together as clowns and in high school drill team and ballet.

First from her home on Harbor Island now from her home office on Greenville Loop Road family is the inspiration behind her Bonair Daydreams as is the creation of each card series. Marsh and her mother Annella Ogden collaborate on the telephone about ideas for what is written inside of the cards. Marshs daughters Annie 16 and Lily 13 often model for the photos and help weed out quotes scribbled on sticky notes and stuck to images during the creative process.

They live and breathe it with me Marsh says. My kids have always been in cards so they dont think anything of it anymore.

Spending time with her children and her furry companions Cross and Chance are the best gifts of her business she says.

It was an important card because it reminds me of Tracys card in my daughters version Marsh says.

Personally answering each email order as she always does Marsh inquired about the purpose of the 100-card order. The buyer replied saying the cards were being used as bereavement cards following the funeral of her daughter. The card was framed on her daughters wall in her beach house where her mom says she lived out loud like the card reads.

I started to cry actually Marsh says. I keep every email I get. Theyre complete strangers but I love that you can get so close to somebody and thats the beauty of words.
In August Chrissy and her daughters traveled to New York City for birthday celebrations where several photo opportunities presented themselves to Marsh.

This little girl was just walking down in Greenwich Village Marsh says. Images like that youre like OK I know thats going to be a card the second I saw it.

Marsh also spotted an older couple that inspired her but missed the opportunity to photograph the pair.

So lo and behold two days later were sitting in a little caf in Greenwich Village and who walks by but this couple again she says. I jump up and Im chasing them down the street.
The creative process varies when coupling the images and quotes.

Thats how I operate Marsh says. Sometimes it will be the quote first and sometimes the image first but sometimes they dont work at all. Sometimes you will have an idea and it just wont work.

Her indecisiveness led her to add an extra quote on the left inside panel of each card. The same goes for secondary photos which she sometimes places on the back of the card.
Any of them will work; its just like which ones the best? Marsh asks. I struggle with that. I really do.

A lot of people love the inanimate objects because they dont have any faces she says. I do have a lot [of images] from behind. Sometimes you dont want to see the faces.
Her most recent work can be seen in her 2013 28-card series Scatter Joy.

Locally Bonair Daydreams cards which have earned seven LOUIE awards from the Greeting Card Association can be found at Learning Express Blue Moon Airlie Moon Occasions and The Sterling House.

Through her sisters death Marsh learned that comfort and sympathy are her favorite card categories to craft for others.

I feel like a lot of people do birthdays well Marsh says. I feel like the sympathy category is so sensitive that its important to do it well and with sensitivity and not clich. They always take me longer to create because I want to make sure that theyre right.

Selling finished Carolina Bouquets at the local farmers markets Castle Hayne Farms ships flowers across the country. Theirs are the bouquets you see and smell when you step inside Whole Foods Fresh Market Harris Teeter and Earth Fare.
There used to be lots of flower farms in Castle Hayne with gladiolus and daffodil fields but were pretty much the last says office manager Karen Frye.
The flower-growing season usually starts after Christmas and ends in June with about 60 people working seven days a week arriving at 6:30 a.m. some days and picking flowers after 7 p.m. on others.
While peonies are the farms cash crop Frye says most of the bulbs imported from Holland are Dutch iris. And different bulbs require different types of care she says.
The irises grown in varying stages require computer-regulated greenhouse temperatures despite late spring freezes when two people usually owners Mark Hommes and Edwin van de Bovenkamp must stay overnight.
Van de Bovenkamp who has worked on the farm for 25 years and owned the land with Hommes for the past eight says he enjoys the challenges of operating a farm.
Every day is different [and] our farm is unique because of its location and its history he says. Our region has its own microclimate which makes it a good place to grow the crops that we grow.
Almost always growing the same flowers each year in various shades of spring Frye says the successful formula of peonies irises and other favorites will not likely change.
For more information about the history of or seasonal flowers from Castle Hayne Farms visit www.castlehaynefarms.com

From the coasts of Canada to the beaches of Belize Holly Daniels Christensen stores sand from more than 1 200 named beaches in her sandbank yet she has only been to about 200. Since 2010 hundreds of people have sent tablespoons of sand to Christensens Dune Jewelry in Boston Massachusetts.
When she realized the deep emotional attachments people have to their favorite beaches Christensen says she thought to convert beach sand into unique earrings pendants rings and bracelets.
People tend to refer to their special beach as their beach or my beach she says. Ive even gotten sand from beaches where ashes were scattered ​or where husbands proposed years ago.
There are two different patent-pending processes involved in creating the jewelry. The first process requires layering sand and resin to form a stone glass-like finish. The second process calls for Christensen and two other jewelry artists to hand sand the piece inlaid into the silver for a flat finish before the piece is polished.
After starting her business with about 100 orders Christensen noticed a reoccurring request for Wrightsville Beach.
Wrightsville sand is actually really interesting to work with because it has a lot of really fine quartz then it also has bits of shell she says. So the consistency is much different.
With simple and clean designs like the sleek earrings and matching necklace from the Sandbar Collection or classic oval pendants from the Sandrop Collection each jewelry collections name reflects the same beach theme.
Christensen encourages anyone to send their own sand. A portion of the proceeds which range from one to 30 percent is donated to coastal preservation programs like the Surfrider Foundation and other programs like Hope for Ariang a village in South Sudan. Visit www.dunejewelrydesign.com for more information.