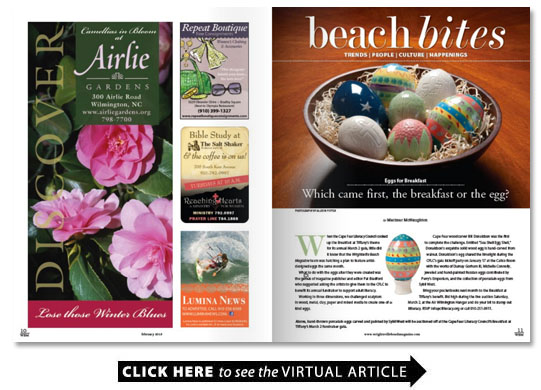 Which came first the breakfast or the egg?

When the Cape Fear Literacy Council cooked up the Breakfast at Tiffanys theme for its annual March 2 gala little did it know that the Wrightsville Beach Magazine team was hatching a plan to feature artist-designed eggs the same month.

What to do with the eggs after they were created was the genius of magazine publisher and editor Pat Bradford who suggested asking the artists to give them to the CFLC to benefit its annual fundraiser to support adult literacy.

Cape Fear woodcarver Bill Donaldson was the first to complete the challenge. Entitled Sea Shell Egg Shell Donaldsons exquisite solid wood egg is hand-carved from walnut. Donaldsons egg shared the limelight during the CFLCs gala kickoff party on January 17 at the Calico Room with the works of Dumay Gorham III Michelle Connolly jeweled and hand-painted Russian eggs contributed by Perrys Emporium and the collection of porcelain eggs from Sybil West.

Bring your pocketbooks next month to the Breakfast at Tiffanys benefit. Bid high during the live auction Saturday March 2 at the Air Wilmington Hangar and do your bit to stamp out illiteracy. RSVP [email protected] or call 910-251-0911.

In its sixth year the Lower Cape Fear Hospice & LifeCare Center Celebration of Flowers will blossom from a one-day event to four days packed with flower power this month.

Development manager Tracey Kellogg says the excitement surrounding Matthew Robbins a celebrated event and interior designer during the 2012 Festival of Flowers served as the inspiration. Robbins will be part of each of the four events offered at this years festival beginning on Tuesday February 19 at 7 p.m. with the Garden Party Ready fashion show.

During the show Robbins will help create flower hairpieces and flowers on hats as a prelude to the rash of spring garden parties Kellogg says.

A more intimate gathering will take place on Wednesday February 20 at 11 a.m. with A Set Table where guests will work closely with Robbins to design an appropriate centerpiece for the table at which they are seated.

Those who enjoy the traditional Festival of Flowers can create and take home the arrangements made at the Wilmington Convention Center on Thursday February 21 at 4:30 p.m.

The four-day festival will conclude on Saturday February 23 with an oyster roast that is expected to draw in a larger crowd than the 300 people who attended last years event.

Traditionally the Festival of Flowers has really appealed to primarily women who are interested in gardening or floral design so when we had an opportunity to expand the week with Matthew we tried to target different demographics Kellogg says.

Individual tickets will be sold for each event ranging from $50 to $150. The money raised will go toward Hospices anticipated $500 000 deficit for unreimbursed programs and services for those who are facing the end of life.

Fire on the Dock

Bluewater Grill will host Fire on the Dock beginning February 18 through April 3.

Part of the Got To Be N.C. Competition Dining Series will return to Wrightsville Beach for the second round of regional chef competitions.

Created by restaurateur Jimmy Crippen the original Fire on the Rock series first surfaced in Blowing Rock home of Crippens Country Inn and Restaurant. With the competitions expansion last year stops were added in the Triangle the Triad and Wrightsville Beach. This year the series expands to Charlotte and Asheville.

Fire on the Dock 2013 will feature 16 local chefs from the Cape Fear and Crystal Coast regions in eight preliminary battles with each battle pitting two of the chefs against each other to win over the guests and celebrity judges.

At the beginning of each battle a secret local ingredient will be announced. That ingredient must be used in each of the chefs three culinary creations.

During the course of each dinner roughly 100 diners and judges will grade each dish based on its presentation aroma flavor accompaniments creativity and execution. Those with smartphones or tablets can enter their scores on the app developed especially for the dining series.

Individual tickets for each battle are $59. To make reservations and for more information visit www.competitiondining.com