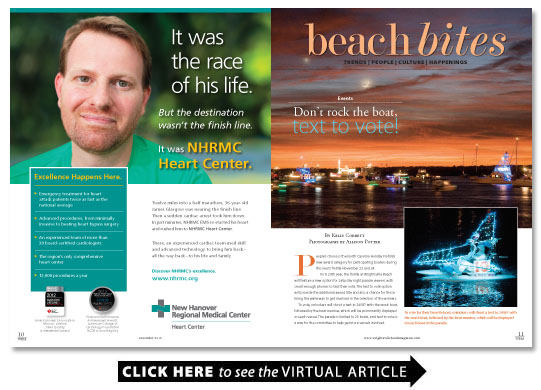 Peoples choice is the North Carolina Holiday Flotillas new award category for participating boaters during this years flotilla November 23 and 24.

In its 29th year the flotilla at Wrightsville Beach will feature a new option for Saturday night parade viewers with smart enough phones to text their vote. The text to vote option will provide the additional award title and also a chance for those lining the waterway to get involved in the selection of the winners.

To vote onlookers will shoot a text to 24587 with the word: boat followed by the boat number which will be prominently displayed on each vessel. The parade is limited to 25 boats and text to vote is a way for the committee to help get more vessels involved.

Judges located at the end of the Blockade Runner dock will choose the other winners of the parade including three power boat categories best sailboat best costumes and crew spirit and best in show.

The weekend will begin Friday November 23 with a traditional holiday tree lighting followed by a launch party and will wrap up with the fireworks show following the boat parade on Saturday November 24.

The traditional Anchors Away Launch Party featuring a silent auction is sponsored by Atlantic Marine at the Blockade Runner Beach Resort. The Festival in the Park at Wrightsville Beach Park will include new childrens activities and more vendors.

When author Mark Bowden visited WBM in May 2012 he swore us to secrecy about his latest book The Finish released this month by Atlantic Monthly Press. As part of Bowdens research he was the only journalist allowed to interview President Obama about the raid that killed Osama bin Ladin on May 2 2011.

MB: Im writing a book about the raid that killed Osama Bin Ladin. Ive been working extensively with the White House and CIA and Pentagon trying to reconstruct that whole process. Ultimately I hope to advance the story a little bit. All of that is proving to be a very tough nut to crack.

WBM: How did you prepare to interview the president of the United States?

MB: The concern is that you have a limited amount of time I knew what the most important questions were I needed to ask him so that I get them up front and I knew that you have the things you want to make sure you dont forget to ask about. My worry about interviewing Obama was that hes a talker and that he would begin digressing. How do you say to the president of the United States Could you get back on point?

WBM: How much time did you have?

MB: About an hour and fifteen minutes; he was very generous. But he was great he understood clearly with the limited amount of time we had what it was I was trying to accomplish and while he gave very thoughtful and full answers he speaks in perfect sentences he would wrap things up really nicely. I really am grateful to him because I would ask him a question sometimes about what concerns does he have about just yielding this much power and he really worked to think about the answer in a thoughtful way.

My tape recorder quit on me the only time in my entire life as a reporter that that happened. I have one of those little digital recorders. Ordinarily in an interview Ill check it once or twice just to make sure its still functioning. Well I was pretty riveted so I wasnt checking it. I got up at the end of the hour and fifteen minutes thrilled with what a great interview it was looked down and my recorder was dead. I didnt know when it had cut off so Im on my way out of the office thanking Obama and his national security advisor Ben Rhodes is there and I said Ben my recorder quit! He says Ahh no problem. Well get you a transcript before you leave. And it was a great transcript too.