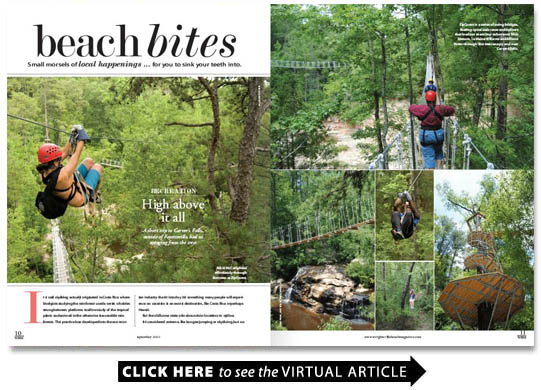 It is said ziplining actually originated in Costa Rica where biologists studying the rain forest used a series of cables strung between platforms to allow study of the tropical plants and animals in the otherwise inaccessible rain forests. This practical use developed into the eco-tourism industry that it is today. Its something many people will experience on vacation in an exotic destination like Costa Rica or perhaps Hawaii.

But the old home state also abounds in locations to zipline.

Its considered extreme like bungee jumping or skydiving but no experience is required.

These tours are also called canopy tours because the action occurs in the tree canopy.

Borrowing heavily from the technology used in rock and mountain climbing zipliners don harnesses clipped onto steel cables that run from point A to point B typically landing on platforms located high above the ground. Traversing from one platform to the next via cable propelled by the sheer force of gravity the thrill of the ride includes reaching impressive speeds.

As part of our fitness challenge one in our trio Trish Matson expressed a desire to use zipling as a benchmark goal for her training; so we set about to discover the best way to accommodate that for her.

In mid-July five of us Trish Nikki McCall from our administrative staff photography director Allison Potter my trainer LaMaine Williams and I ventured the easy two-hour drive to Carvers Falls near Fayetteville to experience ziplining for ourselves. (Despite my acrophobia this was a once-in-a-lifetime opportunity that I was not going to pass.) None of us except Trish really knew what to expect.

Norwood Bryans family has built the course out of an undeveloped 55-acre forested parcel of land that once belonged to Frank Stouts father prior to the Bryans midcentury purchase. The Bryan family has created a beautiful state-of-the-art site that includes three Indiana-Jones-style cable swing bridges and eight ziplines all high above the tree tops. The property includes a waterfall along with the remains of a mill.

Participants wear gloves a helmet and a full-body harness with a carabiner that is attached to a pulley that is placed on the cable strung between the platforms. At the tour site we were assigned a pair of guides. Orientation and instructions about putting on the harnesses adjusting helmets and the basics of platform arrival and departure followed. Then on to a practice run or two on the bunny zips. The guides stayed with us the entire time one in front the other to the rear.

After climbing to the first platform atop a floating spiral staircase attached to a massive tree we dropped off the platform and zipped along the cable zipping from platform to platform.

The swing bridges were another animal striking fear in the heart of even the staunchest in our group.

Our guides Ryan McClymonds and Lindsay Trigboff took extremely good care of us and made our field trip an unforgettable day. Pat Bradford

Zippin through Carolina
North Carolinas scenic topography has made it the location for zipline attractions.

Big Woods Zip Line and Canopy Tour (next door to Sanders Ridge Winery in Boonville near Winston-Salem)
This tour combines a zipline adventure with a visit to one of North Carolinas 90-plus wineries. It offers 150 acres of secluded Yadkin Valley forests on a canopy tour with 14 platforms and 12 cables up to 65 feet high.
www.bigwoodszipline.com

Carolina Ziplines Canopy Tours
(north of Winston-Salem in Westfield)
After opening ziplines in Costa Rica and Ecuador its owners opened their first U.S. attraction in the piedmont at the edge of Hanging Rock State Park. www.carolinaziplines.com

Scream Time Ziplines (minutes outside Boone in the High Country)
Home to the first triple-wide 2 000-foot line called the “Super Zip ” which is an add-on to the standard six-line tour.

The Beanstalk Journey at Catawba Meadows (in Morganton)
A blend of zipline tours and ropes courses. www.thebeanstalkjourney.com

Hawksnest Resort Zipline Tour (in Seven Devils near Banner Elk)
This resort has 10 ziplines that create a 1.5-mile course with some lines 30 to 180 feet off the ground. Hawksnest added nine additional ziplines and more than 3 miles of cable this summer. www.hawksnest-resort.com

U.S. National Whitewater Center (Charlotte off I-277)
Riders take off from the top of the 46-foot Mega Tower and fly over sections of Class III and IV whitewater rapids. www.usnwc.org


WBM Fitness Challenge
Nine months into a yearlong quest to transform their lifestyles our three ladies are all trying something new.

Crystal South surf lady Jo Pickett met me on the Blockade Runners Banks Channel beach some placid Sunday mornings this summer. Tom McNiff from Hook Line and Paddle was always ready for us. Hed offer me a lifejacket and help me gain my footing on a Liquid Logic Versa standup paddleboard then hand me a paddle and off wed go Jo and I to cross the channel and head for the marsh islands Id longed to explore.

The Versa board is a magnificent touring vessel with holds for stowing gear and cross ties for stashing bottled water and whatnot. There is a divot in the center for those who wish to mount a kayak seat and clips on the sides for extra paddles and fishing rods.

I relished the footpads; and when the feet began to ache those cushy pads proved ample enough to support a pair of knees. Why there was even a cushion for my derriere for sitting down as I did on my maiden voyage when I paddled around the Motts Channel boat basin until I spied a little spit of sand near a marsh island where I could disembark and cool my arches. Jo and I have since dubbed the spot: Marimars sand bar.

You laugh but not I for traveling the world and visiting all of its Marimar beaches is just what I intend to do. Ill say I began my journey in Banks Channel onboard the trusty Versa with Jo Pickett as my guide!


A year is a long time for a fitness challenge but in order to have real and lasting improvements to our bodies and health we felt a long-term challenge was the way to go.

Its not been without its ups and downs either. One of the unexpected results that became obvious just a few weeks into the training regimen was the pain of sore limbs and muscles.

After years of abuse coupled with a lack of any routine exercise theres really no way to achieve a higher level of fitness without putting the body through some pretty serious punishment. No pain no gain. But living with the pain day in and day out also became prohibitive.

First for me and later for Marimar McNaughton turning to
Dr. Robert Fibich a chiropractic physician also certified in applied kinesiology was the answer.

Fibich has carved out a niche for himself in Wilmington as a fix-it man. And he certainly has worked wonders for me. Twice a week my trainer LaMaine Williams puts me through my paces often reducing me to a limping pile of sad humanity by weeks end.

Williams met me at Fibichs Oleander Oaks office where he and the combined kinesiology and chiropractic doctor had a meeting of the minds to my benefit.

Fibich is a true body mechanic who keeps himself on the top of his game by sharing his talents weekly with grateful Wounded Warrior patients.

A word to the wise any serious fitness regimen should plan to include routine adjustments to the body and frame.

After I hit a 40-pound milestone following six months of diet and exercise I must admit to a certain amount of backslidingeating more and exercising less. A severe summer cold further debilitated my conditioning.

For the last few weeks however I have become serious about self-improvement again. I resumed my gym workouts and lost the nine pounds I had temporarily regained.

Meanwhile a trip to ZipQuest helped hone my motivation. The zipline course was easier than I expected and I thought about how much progress I had made in balance coordination strength endurance and energy since this challenge began.

My future fitness plans are in flux at the moment since my former personal trainer is now attending the police academy. However I am determined to continue my efforts to become healthier one way or another.

Good luck Brian and thanks for all the progress you helped me achieve!

Sunbathers come and go but their trash is here to stay. Keep America Beautiful and SUP Cleanup are two of the many local organizations that sweep the beaches and the waterways at the end of the season. On September 24 volunteers will gather for the Big Sweep Beach Cleanup to help keep the sandy backyard of Wrightsville residents clean and litter-free.

Keep America Beautiful annually participates in the Big Sweep a statewide cleanup that aims to improve not only the look of North Carolina but the attitude of local communities as well. Beginning at 9 a.m. near Johnnie Mercers Pier volunteers along the coast will be able to make a difference and join in on the trash removal.

“New Hanover has participated in Big Sweep since 1987 ” says Jennifer OKeefe coordinator of Keep America Beautifuls New Hanover County chapter. “We work to clean up our land and our waterways. Its a great way to improve the community while spending time outdoors.”

Another advocate SUP Cleanup strives to keep Wrightsville Beach as clean as when people first set foot on sand. Co-founded by Jeoffrey Nathan SUP Cleanup is an effort that gathers paddlers on standup boards in canoes and kayaks to travel to nearby marsh islands that arent typically targeted in big-name beach cleanups.

“Weve had about 30 cleanups since the Wrightsville chapter started ” says Nathan who began SUP Cleanup with his wife Catherine Nathan in March 2009. He says they fill full-sized dumpsters with garbage and debris anything from aluminum cans and plastic bottles to toothbrushes.

While it began in Wrightsville SUP Cleanup is now a worldwide organization with more than 26 chapters in areas like Australia the United States and Dubai. Chapters focus on recruiting as many people as possible and host cleanups every month. Similar organizations like Keep America Beautiful share Nathans fierce passion and goal of reducing the garbage in the worlds oceans.

“In a county like ours that is surrounded by water its easy for things to get washed into the ocean regardless of where it was originally left ” says OKeefe who also serves as the Environmental Education Program Coordinator at Airlie Gardens. She encourages everyone interested in keeping the beaches beautiful to learn more by participating in all future beach sweeps and having fun while doing itsomething SUP Cleanup founder Nathan can definitely attest to.

“Cleanups are a good time and people make good friends ” Nathan says. “It is a great way to get the community together and teach people about the ocean and how we can keep it clean.”

Information about Septembers SUP-sponsored day can be found on
www.supcleanup.com. Sara Leary