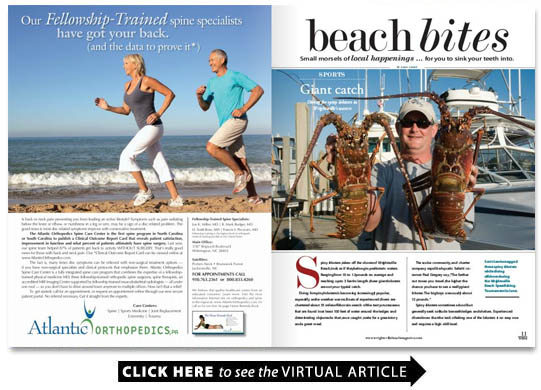 Spiny lobsters taken off the shores of Wrightsville Beach look as if they belong in prehistoric waters. Ranging from 10 to 12 pounds on average and reaching up to 3 feet in length these giant lobsters are not your typical catch.

Diving for spiny lobsters is becoming increasingly popular especially as the weather warms. Boats of experienced divers are chartered about 35 miles offshore in search of the tasty crustaceans that are found in at least 100 feet of water around the ledges and deteriorating shipwrecks that once caught make for a great story and a great meal.

The scuba community and charter company reps like Aquatic Safaris co-owner Paul Gregory say “The farther out to sea you travel the higher the chance you have to see a really giant lobster. The big boys are usually about 12 pounds.”

Spiny lobsters sometimes school but generally seek solitude beneath ledges and shelves. Experienced divers know that the task of taking one of the lobsters is no easy one and requires a high skill level.

“It is a challenge to catch these lobsters because they are very fast and very strong ” says Gregory who began diving while attending Virginia Tech as a graduate student. “It isnt like you just go on a dive and say Oh come here lobster get in my bag. You actually have to work to catch them. You kind of sneak up on them and then when you grab them you grab them and hang on!”

Once caught the huge lobsters are often steamed boiled and fried just like Maine lobsters. The catch limit for spiny lobsters is two per person per day.

“There are certainly people that are not aware of the limit ” says Rich Carpenter of the North Carolina Division of Marine Fisheries. “But most of the experienced divers are familiar with it so the limit hasnt presented a problem.”

Carolina Beach local and avid diver Shaw Lakey said that limits like this are necessary to ensure protection.

“The only way they are caught now are by the divers that are brave enough to go get them themselves ” says Lakey who went on 103 dives last year and has experience catching the spiny lobsters in local waters and in the Bahamas. “Ive been in areas where Ive seen lobster with no catch limit on them. They were completely decimated.”

Locals say that the spiny lobster population found in Wrightsvilles waters is very healthy because of the lack of fishing pressure. There isnt much of a commercial market for these giant lobsters because there is no specific fishery in the area for them. Experienced divers like Gregory and Lakey examine the lobsters to make sure they arent carrying any eggs before claiming them as a catch. “You wouldnt want to kill one of the lobsters with the berries on them ” Lakey says.

Hard to swallow: The teeth that top the ancient food chain

t the North Carolina Aquarium at Fort Fisher a replicated Megalodon shark jaw stands tall six feet tall to be precise as part of an interactive exhibit which opened in mid-June.

“Megalodon: Diving with North Carolinas Ultimate Predator” features various artifacts 3D animations and interactive displays about the extinct shark species in addition to the monster-sized jaw. Visitors have an opportunity to learn about the deep-sea predator and gain a perspective about the strength and power of the Megalodon.

Information about modern-day sharks is included in the exhibit too as the aquarium strives to share with the public the importance of the species to a healthy ocean ecosystem.

The original Megalodon teeth that make up the replicated jaw were found off Aurora North Carolina as a full set. These massive sharks which are estimated to have been about 50 to 60 feet long had four rows of teeth. Each tooth ranges in size from four to six inches.

Megalodon swam freely from 20 million years ago to about 2 million years ago. A predicted reason for their extinction is the climate change during this period which may have altered the migration routes of whales the Megalodons main prey.

can be found on the lower level of the marine building at the North Carolina Aquarium at Fort Fisher. Open daily from 9 a.m. to 5 p.m. entry fees for the aquarium are $8 for adults $7 for seniors and $6 for children.

When Tripp Brice Jimmy Vass and Kit Taylor came together to create a fishing tournament in memory of their good friend Captain Eddy Haneman none of them anticipated the events success in the years that followed. By letting people know about the sailfish off of Wrightsville Beach shores the three friends would create a lasting impact on their community.

“Capt. Eddy was the man who started charter fishing off of our shores back in the 40s ” Brice says. “The fishing tournament helps to keep his name out there for generations to come and to promote the sailfish in the area that very few people know about.”

With at least 50 boats participating each year the tournament has gained popularity not only for the fishing but for the charitable celebration at the end of the weekend as well. Each year founders Brice Vass and Taylor select a terminally ill individual usually a child to whom they donate the earnings from the tournament. By helping out financially the tournament has made its mark by being about more than just catching a 30-pound sailfish.

“The real winners are the families we select each year ” Brice says. “When all the donation presentations are going on there is seldom a dry eye in the area.”

Since the start of the event in 1998 the sailfish tournament has also donated between $60 000 and $75 000 to a local hospice in memory of Capt. Haneman. While the families change each year the hospice remains a constant and is donated to annually.

Brice is confident that the tournament will continue for years to come because it is such a worthy cause. As the largest tournament occurring in the Wrightsville Beach area it gains new participants each year with an all-time high of 90 boats. Whether an experienced fisherman or just someone interested in the sport everyone is encouraged to come check out the July event and hopefully fall in love with charter fishing just like Capt. Haneman did years ago.

To register fishermen should arrive at the Bridge Tender Marina on Thursday July 28 to pick up tournament cameras and listen to rules. Each release of a caught sailfish must be photographed as killing one will automatically disqualify participants. This gentlemans tournament has a basic entry fee of $250 while $400 will allow participation in everything including the dolphin Calcutta.

The long days of fishing begin Friday at 8 a.m. and conclude Saturday at 3 p.m. Once the boats are tied up and the reels are stored away the community comes together to celebrate the fishermen and Capt. Haneman with a large awards ceremony and reception for the anglers.