From the Sea  Shell Show
Prized and rare shells will be on display and available for purchase at the Cape Fear Museum.

Shell collecting is a popular pastime for well anyone and everyone who likes to walk on the beach. And if you like shells youre going to love the Shell Show at the Cape Fear Museum of History and Science (814 Market Street 910-798-4370) on September 24 and 25. “This is a great way for people enthusiastic about shells to reach out to the public ” says Cape Fear Museum Exhibit Designer John Timmerman. 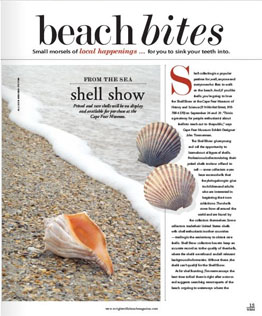 The Shell Show gives young and old the opportunity to learn about all types of shells. Professional collectors bring their prized shells to show off and to sell some collectors even have excess shells that they bring along to give to children and adults who are interested in beginning their own collections. The shells come from all around the world and are found by the collectors themselves. Some collectors trade their United States shells with shell enthusiasts in other countries trading is the easiest way to obtain rare shells. Shell Show collectors have to keep an accurate record as to the quality of the shells where the shells were found and all relevant background information. Without these the shells cant qualify for the Shell Show.

As for shell hunting Timmerman says the best time to find them is right after a storm and suggests searching remote parts of the beach or going to waterways where the water is clear and people are scarce. He also says shell aficionados should shuffle their feet when walking in the water. “If you bump into an animal it swims away. If you step on an animal they feel threatened and youll be hurt ” Timmerman explains.

As beautiful as they often are shells are more than collectors items; theyre homes for mollusks whose shell grows with them as they age (unlike hermit crabs for instance who discard their shells as they grow larger and older). A mollusks shell is its exoskeleton a living part of the animal. Sometimes collectors find shells with the animals still in them so Timmerman cautions collectors to be careful when choosing shells. “You want to make sure that the shells are plentiful. If there is only one of the shell in the area you should inspect the shell but leave it in its natural habitat. Otherwise youll disturb the animal.” Timmerman suggests that you wait until you find an abundance of shells around a dozen or so and then take a few with you to keep for yourself.

Shell ID 101 Here are some definite keepers you might see at the Shell Show:

Scotch Bonnet Shell
The Scotch Bonnet Shell has been North Carolinas state shell since 1965. It was named in 1778 after its resemblance to the caps that Scottish peasants wore. Its smooth and round on the top and some have spots on them. On the bottom it has what Timmerman calls “pimples ” whose purpose he believes is to stop predators. “If an animal reaches in with their suction-cup mouth it has nothing solid to hold onto ” he says. Scotch Bonnets are plentiful in the Outer Banks. After storms there can be thousands on the beach.

Knobbed Whelk
Knobbed whelks are commonly called conch shells and can be used to “listen to the ocean” through their opening. They have knobs on the largest part of the shell and the ends are pointed. They are found locally and can be as large as 16 inches. You can find whelks crawling around in knee-deep water searching for oysters and clams their favorite foods. They use their hard shell to separate the clam and oyster shells. If nothing appeals to them theyll eat other whelks.

Moon Snail
Moon snails have the same diet as whelks and feed on other mollusks but while whelks only leave scratches and small chips while opening oyster and clam shells moon snails leave holes. They find the weakest part of the shell drill a hole and eat the animal through it. This process can take hours and sometimes even days to complete. It leaves the prey shell with a small hole thats perfect for making jewelry. Moon snails can grow as large as seven inches wide and because of their size are able to glide through the sand with ease. Amanda Thames

In 1961 and 62 Wilmingtons Ray Cox was an interior communication petty officer on the USS Lookout stationed at sea and keeping our country secure during the hostile years of the Cold War. To pass the endless hours he began writing messages the same message over and over placing them in empty medicine bottles and sending them overboard into the ocean because Cox says “We were bored.” He remembers casting hundreds of bottles to sea all of which carried the same message: “If found please write to: Jesse Ray Cox.” Each message was signed with Coxs address as well as the date and time. One particular bottle about three inches long with black electrical tape wrapped tightly around the cork was sent overboard on May 1 1961 at 8:44 p.m.

“I couldnt tell you where I threw it over ” says Cox. “It was dark and we werent allowed to know our location at any time.” He does remember it being very cold however and guesses that the Lookout may have been on duty in Iceland or Antarctica.

On May 24 2010 49 years and three days after the bottle had been tossed into the ocean Rich Dunlap a physics professor at Dalhousie University in Halifax Nova Scotia found it on Sable Island in Nova Scotia Canada alongside other objects Dunlap guessed were washed ashore after a storm.

The glass was still in perfect condition and the top was sealed so tightly that when Dunlap opened the bottle he could smell remnants of the medicine that originally came in the container. There was no water damage to the message at all. Dunlap decided to respond to the letter immediately found three men named Jesse Cox living in Wilmington chose the one he considered to be the most likely candidate and was right!

Now that their connection has been established both Cox and Dunlap are equally amazed at the length of time between sending and receipt (49 years for Petes sake!) the mint condition of both the bottle and message inside and the fact that Dunlap actually found Cox alive and well and living in North Carolina. For his part Cox doubts that he will toss more messages into the ocean but feels immensely excited that one of his bottles circa 1961 has finally found its way home. Amanda Thames

People local jazz musicians Galen & Lisa
The love of music keeps this couple in tune with each other.

From the jazz age of the 1920s and 30s to swing to Dixieland to bebop to cool jazz to hard bop to modal jazz to free jazz to Latin jazz to post bop to soul jazz to jazz fusion to jazz funk to smooth jazz to acid jazz nu jazz jazz rap punk jazz and jazzcore one thing is clear: Since its inception its all been “close enough for jazz.” 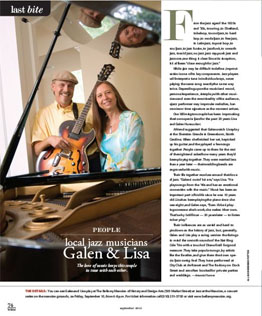 While jazz may be difficult to define improvisation is one of its key components. Jazz players will interpret a tune in individual ways never playing the same song exactly the same way twice. Depending upon the musicians mood personal experience interplay with other musicians and even the emotionality of the audience a jazz performer may improvise melodies harmonies or time signature as the moment arrives.

One Wilmington couple has been improvising their own special jazz for the past 20 years: Lisa and Galen Hunsucker.

A friend suggested that Galen watch Lisa play at the Sheraton Grande in Greensboro North Carolina. When she finished her set he picked up his guitar and they played a few songs together. People came up to them for the rest of the night and asked how many years theyd been playing together. They were married less than a year later their wedding bands are engraved with music.

Their life together revolves around their love of jazz. “Galens out of his era ” says Lisa. “He plays songs from the 40s and has an emotional connection with the music.” Music has been an important part of his life since he was 10 years old. Lisa has been playing the piano since she was eight and Galen says “Even if shes playing someone elses work she makes it her own. Thats why I still love 20 years later to listen to her play.”

Their influences are as varied and hard to pin down as the history of jazz but generally Galen and Lisa play a swing version that brings to mind the smooth sounds of the Nat King Cole Trio with a touch of Diana Krall for good measure. They take popular songs by artists like the Beatles and give them their own special jazz-swing feel. They have performed at City Club at de Rosset and The Balcony on Dock Street and are often booked for private parties and weddings.

You can see Galen and Lisa play at The Bellamy Mansion of History and Design Arts (503 Market Street) at Jazz at the Mansion a concert series on the mansion grounds on Friday September 10 from 6-8 p.m. For ticket information call (910) 251-3700 or visit www.bellamymansion.org. Amanda Thames