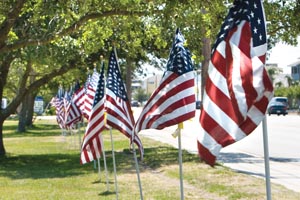 After the Civil War many Northern cities felt the need to remember those soldiers who gave their lives. Though several cities lay claim to the first “memorial day ” it is widely accepted that Waterloo New York held the first one on May 5 1866 where businesses closed and townspeople decorated the graves.

In 1868 May 30 was declared Decoration Day by General John Logan commander of the Grand Army of the Republic an organization of Union army veterans. On that day flowers were draped over the graves at Arlington Cemetery in Washington D.C. General Logans words are still pertinent today: “Let no neglect no ravages of time testify to the present or to the coming generations that we have forgotten as a people the cost of a free and undivided republic.”

After World War I the holiday was expanded to honor all soldiers who gave their lives to America and in 1971 Congress officially named it “Memorial Day.” With the passage of the Uniform Monday Holiday Act the date changed from May 30 to the last Monday in May.

In 2000 Congress passed the National Moment of Remembrance Act. Each Memorial Day at 3 p.m. local time citizens are asked to observe a minute of silence for the fallen soldiers. It has become customary to honor all our soldiers deceased retired or still on active duty.

in the 45th Annual Memorial Day Observance at Battleship Park at 5:45 p.m. “The boo-hoo moment ” says Kim Sincox museum services director of the Battleship North Carolina “is when the Second Marine Division Band plays the [theme] song for each branch of service. As each song is played men and women who served for that branch stand and salute. Thats what Memorial Day is all about. Its not just another sale day.” Admission is free. For more information visit www.battleshipnc.com or call (910) 251-5797. Sarah Brehm

Remember when you were a kid and you thought that the radio was powered by magic?

Well it wasnt magic. It was science and technology and you can learn how it works by watching the Amateur Radio Club in action at the MS walk at Greenfield Lake this May. But be prepared: Even though the club humbly calls itself “amateur ” these folks are far from it.

“Amateur doesnt mean unprofessional it means we cant be paid for our services ” says section manager Bill Morine. Reading between the airwaves what this means is that the memberships love for amateur radio is what brings them to teach locals the ins and outs of the business at the Battleship North Carolina each year and to volunteer their time and services to benefit charities and local organizations. And there are ins and outs galore. “Ham radio is not CB its not family radio (walkie talkies) ” Morine says.

Since the first documented ham radio transmission in 1899 amateur radio technicians (or Professionally Licensed Electronic Communications Volunteers) have been working to further advance radio technologies. Even though they are able to buy commercial equipment amateur radio volunteers are encouraged to develop their own gear (much of which is fashioned from household appliances such as cake pans or cereal boxes).

This year the NC QSO Amateur Radio Club will be volunteering at the MS Walk (May 15 7 a.m. at Greenfield Lake Park) supplying communication for the event. “We have a motto ” public information officer Glenn Cox says. “When all else fails amateur radio comes though.” The club will handle everything from simple communication between officials and workers to contacting emergency technicians.

All amateur radio technicians are welcomed and encouraged to take part in this event. “This year Im trying to include any and all amateur radio members who want to be involved. It doesnt matter what club theyre in as long as they would like to help ” Cox says.

The 29th Annual NCAA Womens Golf Championships which attract the nations best collegiate golfers to the Landfall Country Clubs Pete Dye Course will be held in Wilmington on May 18-21. Thousands of fans from across the country are expected to attend this 72-hole (four-round) golf competition hosted by the University of North Carolina Wilmington (UNCW). “To host a championship is an extreme honor ” says Pat Howey UNCW deputy athletic director. “Were getting the top athletes in their sport competing in their last competition of the year.” 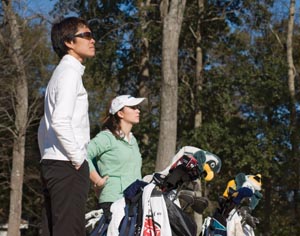 The Pete Dye Course has also hosted other prominent tournaments such as the 2004 North Carolina Senior Championship and the 1995 NCAA Womens Golf Championship. “Back in 1995 we hosted the National Championships its been 15 years so with the help of the Landfall Country Club we put in a bid ” Howey says. The event brings with it national media exposure: The tournament will be covered by local state and national newspapers TV and radio stations.

For more information or tickets please call the UNCW ticket office at (910) 962-3233 or visit the NCAA website at www.NCSS.com/tickets. M.K. Barnes

Between 1880 and 1920 approximately 24 million immigrants came to America. These immigrants hailed from a diverse array of countries including Italy Poland Czechoslovakia Russia and Greece. While most stayed in the industrial Northeast the railroads beckoned some to warmer weather including here in the Port City. Wilmington Mayor Bill Saffos grandfather on his mothers side Nicholas Tripodes who had lived in the wintry boroughs of Pittsburgh and Cleveland came here for a visit in the late 1930s and loved it so much that he decided to stay.

Mayor Saffos Wilmington roots go deep on his fathers side as well. His great grandfather Avgerinos Saffo owned a candy shop in the 1920s on Fourth and Red Cross streets in Historic Downtown Wilmington. Later Mayor Saffos grandfather William Saffo and his wife Angeline founded and operated the Carolinian Motel on Market Street until 1973 when William retired.

As more Greeks settled in Wilmington they wanted a place to worship. In June 1945 the St. Nicholas Greek Orthodox Church opened at its original downtown location at Second and Orange streets. As the Greek population grew through the decades so did the church until the need to relocate could no longer be put off. The current location 608 S. College Road was purchased in 1980. Today St. Nicholas continues to flourish and provide spiritual nurturing for more than 200 families.

Though comprising only about one percent of Wilmingtons population (approximately 101 000) “the Greeks have brought culture to the community ” says Mayor Saffo “and a sense of diversity. Thats whats so great about America. We all identify ourselves as American and we all came here for a better way of life and opportunity. Wherever were from we bring our own traditions and customs to the community. At the Greek Fest we open our church and share our food customs and faith with Wilmington.”

This year marks the 18th Annual Greek Festival and St. Nicholas invites you to come celebrate with (and like) the Greeks enjoying delicious authentic Greek foods cooking demonstrations Greek traditional and contemporary dancing and the Greek band Lazaros. Nearly 20 000 people are expected to dance sing and eat at the festival this year. “Its a great expression of Greek culture ” says event chair David Snow.

Arrive before 5 p.m. on Friday May 14 for free admission. After five tickets are $3 for adults $2 for students and senior citizens and free for children ages 12 and under. Proceeds go to the church and various charities. For more information visit www.stnicholasgreekfest.com. Sarah Brehm 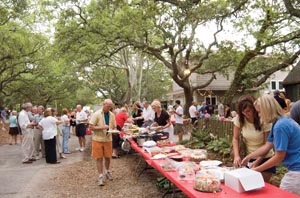 On the first Saturday in June one Harbor Island neighborhood comes together for a covered dish and block party thats become a fabulous tradition the annual Lobster Fest.

For more than two decades friends have feasted on freshly imported Maine lobster at this spinoff of the Wilmington Church of the Servant Episcipals largest fundraiser for outreach projects: the 26th annual Lobster Fest.

Residents carry on this neighborhood party in the footsteps of Rev. Joe Cooper who as a resident headed things up for 21 years. Around 300 people arrive with covered dishes and still-warm desserts at Live Oak Drive the evening of the event ready for fellowship with both old and new friends.

The parent event the Wilmington Church of the Servant Lobster Fest (4925 Oriole Drive 910-545-5378) is also held on Saturday June 5. Cooked and uncooked lobsters can be purchased and extra sides and specially baked deserts are offered throughout the event. This is the first year that the event will offer a childrens plate grilled hot dog corn on the cob and a cookie. The Church of the Servant Episcopal recently constructed a state-of-the-art childrens play area where kids of all ages can enjoy their facilities while the grownups eat.

All proceeds from both events go to the church as well as to various local outreach programs such as Good Shepherd Center and Mother Hubbards Cupboard two food pantries in the Wilmington area.

While the money stays local the lobsters averaging 1.25 pounds each come from New England. “We work with a local seafood company that orders the lobsters directly from Maine ” says event representative Kim Sincox. “We ordered well over 1 000 pounds last year and intend to see those numbers grow this year.”

Lobsters for these events are pre-order only so order yours early. Church of the Servant Episcopal also offers delivery of orders of 15 lobsters or more to any location in New Hanover or Brunswick counties.

To order call the Lobster Line at (910) 538-3241 by May 27; order by May 14 and save $1 per lobster. If attending the Harbor Island neighborhood party notify the order taker or make note of it on the order form. For details and orders visit www.cosepiscopal.com or email [email protected]. M.K. Barnes

Question: What do Wrightsville Beach and Västervik Sweden have in common?

Beverly Laing Andersson grew up on Wrightsville Beach and graduated from Laney High School in 1995. While living in Hawaii she met her husband Morgan who is from Sweden. Married for 10 years they have lived for the past two years in Västervik where Beverly is an English teacher at Östra Akademin. Her students are avid readers of Wrightsville Beach Magazine sent to her by her mom Kathy Laing who still resides here.

“The students love her class ” says Ingemar Jeanlo principal of Östra Akademin. “She’s strict but her students always make high marks.” Ingemar along with Beverly and fellow teacher Linn Amberg chaperoned 17 students to Wrightsville Beach for a 10-day vacation in April. Of those 17 four had never flown two had never been out of Sweden and all but one had never been to America. 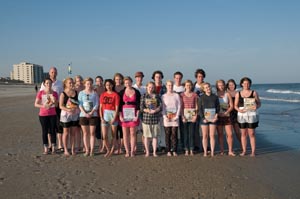 While engaged in a rousing discussion of the weather — in Sweden the average high temperature is currently in the mid 40s — Madeleine Rozmarynowicz’s voice rang out above the cacophony saying “Wrightsville Beach is like heaven!”

The students enjoyed an array of activities: Fifteen attended Easter service at St. Andrew’s On-the-Sound Episcopal Church. Afterwards they participated in an Easter egg hunt. The Daughters of the Confederacy invited them to a Civil War reenactment. Elaine Henson president of the Cape Fear Garden Club invited the students as honorary guests to the Azalea Festival Garden Party. They went to Fort Fisher and the aquarium. Kajsa Söderlund a student who wants to be a police officer toured the Wrightsville Beach Police Department with Captain Teresa Fountain.

But what the students really liked was … the shopping. Several of the girls bought their prom dresses here noting that there was more of a selection the prices were great and as a side benefit to purchasing in America no one back home would have their dress.

“Also everyone is so friendly here ” said Diba Espinoza. “Everyone says ‘Hello ’ and ‘How are you?’”

Seeing the photographs in Wrightsville Beach Magazine come to life is what the students loved the most. “It’s great that they got to see where they were coming to ” says Beverly.

Though the students are sad to leave they will continue to read WBM in Sweden where they can tell their friends that yes Wrightsville Beach is like heaven! —Sarah Brehm