Rob Furman has taken the already extreme sport of kite boarding and made it well even more extreme. Furman has invested in much of the same equipment kite rigging and so on but switched one item that turns the sport upside down: a buggy. 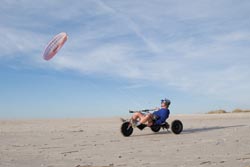 In trading the traditional kite board for a kind of go-cart Furman is able to soar across the Wrightsville Beach sand like a dune buggy would only without the engine.

“You can get lifted 10-15 feet in the air if youre strapped in ” Furman says. And with speeds ranging anywhere from 40-70 miles per hour this sport is almost as much fun for spectators as it is for participants.

But as with many extreme sports this one carries significant risk. Unlike a kite board the kite buggy travels on land which often means a much harsher impact when falling. “Kite surfers have the whole ocean to catch them we have hard sand ” Furman says. To combat these problems Furman and other local extreme-sport junkies wear helmets goggles and often padded chest gear.

When hes all geared up Furman must then be willing to wait for ideal weather if the wind is too strong or the water too high he could find himself in life-threatening situations. “You need to have east to southeast winds at low tide ” Furman says. “Thats really the trick finding the perfect conditions.” M.K. Barnes

Hockey in the port city eh?

Not every kid that laces up skates will play in the NHL less than one percent actually but if we can teach them how to be better kids by applying their hockey lessons the rest of their lives then we as coaches in the great sport of ice hockey  have done our job ” says Coastal Carolina Clippers coach Rich Brouwer.

Wait. Ice hockey? In the Port City? Thats right. One of the regions most accomplished traveling youth hockey teams the Coastal Carolina Clippers practices at The Wilmington Ice House the only ice skating rink in Wilmington.

Michael Starling (9) and Gordon Thompson (10) are Wrightsville Beach Elementary School students who play for the Clippers youngest team the Squirts. In January the team won a silver medal in the Steel City Tournament in Pittsburgh Pennsylvania.

For Michael and Gordon motivation love and drive to play the game are what keep them going. “We only have one sheet of ice in Wilmington ” says Donna Starling Michaels mom. “Sometimes our games are at 6:30 in the morning and the older players have games starting as late as 10 at night. Its a big commitment for the kids. They need a lot of support.”

And they get it. One look at the (white-and-blue-dotted) bleachers demonstrates just how much encouragement the players receive from their friends and families. “All the moms have matching scarves that they wear to the games ” Starling says “and with the amount of traveling the team does it really turns into a family event.”

Although they commonly compete against children their own age the games can be fierce. “Two weeks before we were getting ready to leave for Pittsburgh we received our schedule and noticed that we were put in the wrong division ” Brouwer says. “We had nine first-year players on our team and they put us in a division with teams that had all second-year players. There can be a big difference in size strength and speed between an eight or nine-year-old and a nine or 10-year-old. But our kids worked their tails off and ended up making it to the championship game against Canada.”

Tough as the games and the traveling can be these young players and their families have adapted. Theyre ready for the next whistle to blow and the puck to drop. M.K. Barnes

In a time of great need some do

A group of 23 Wilmington and Wrightsville doctors and nurses dubbed the Carolina/Wilmington Team took off in corporate planes this past January bound for a north coast Haitian town 80 miles across the mountain range from Port-au-Prince where the magnitude 7.0 earthquake was centered. 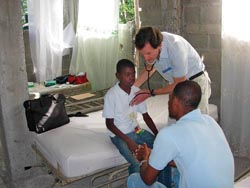 The broad spectrum of medical professionals was led by plastic surgeon Ken White who had already chalked up numerous medical-mission trips to both Haiti and the Dominican Republic.

The trip grew out of the desire to do something for the people of Haiti. A member of the Wrightsville United Methodist Church Sande Kirby a retired flight attendant began calling doctors to see if they could and would go. She contacted White who feeling the hand of providence said to her “You get us the way there and well go.”

As board president of Medical Missions International (MMI) Whites existing pipeline and his expertise working with an already on-the-ground network is what made the trip possible just 9 days following the disaster. MMI is an interdenominational medical ministry to at least 26 countries. The ministry works side-by-side with doctors and health care professionals establishing and equipping permanent medical centers. Working with the Haitian Health Network and Haiti Hospital Appeal this became the goal of the Carolina/Wilmington Team mission to Cap Haitian.

Once the team was in the air Kirby and Logan worked furiously to collect additional supplies to follow on Saturday. Providence saw NHRMC open its doors to medicines and supplies saying: Take whatever you need.

Whites plan was to turn a very rudimentary facility into a working hospital and begin treating patients. The unfinished structure did have electricity albeit sporadic a generator and a well though no running water. Over the two days they had to do medical work the team saw nearly 200 patients and performed some 15 surgeries. They left an OR and post-op room ready for continuing use.

Plans are in the works for the next trip now forecast for April. To donate to this ongoing effort through MMI visit this Web site: www.mmint.org/ earmarking donations to Carolina/Wilmington Team & Ken White. Pat Bradford

Starfish: a star… but not a fish

Contrary to its name the starfish isnt a fish. Its an Asteroidea which is a scientific way to say “a sea creature with five or more arms.” Each arm has the capability to move separately and is laced with dozens of tube feet small suction cups that allow the starfish to move and open shells. 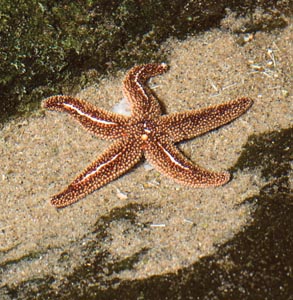 If you have fumbled with a beached starfish looking for its mouth only to declare that it doesnt have one youre not alone. So where is it? Starfish entangle themselves around their prey often shellfish to feed. They use their tube feet to pry open or crack the shell of their prey and its at that moment that their bodies begin to change. A small sack-like stomach emerges from their otherwise undetectable mouth and pushes through the cracks of the shells where it feasts on a meal of mussels clams or oysters (its most common snack).

“The starfish injects its stomach into the shell of its prey and releases digestive enzymes which allow it to break down its food before eating it ” says Melissa Johnson an aquarist at the North Carolina Aquarium at Fort Fisher. “Without this the clams and mussels they eat would be too large to be taken into their body.”

Even though starfish are known for their shape another interesting claim to fame is their ability to regenerate their limbs regeneration can take up to one year to fully restore a limb. “Every now and then if they lose a limb they will regenerate two instead of one ” Johnson says.

Although starfish are found in all of the earths oceans and are unable to survive in fresh or brackish water the largest number of varieties are located in the Indo-Pacific (the tropical waters of the Indian Ocean). Their habitats which are as diverse as their coloring vary from the shallow waters of tropical coral reefs to the canyons of the deep-sea floor. Part of their defense mechanism is their ability to blend in with their surroundings. With colors ranging from vibrant purples and sun-kissed oranges to dark grey stripes and maroon spotted arms and sizes ranging from less than one inch in diameter to more than two feet across starfish are able to camouflage themselves against attacks. However since the majority of starfish are studied in captivity where they usually live for eight to 10 years scientists are still unable to determine their life span in the wild. There are 1 800 species of starfish found around the world from the Atlantic and Pacific oceans to the Indian and Arctic oceans which makes them a substantial part of our marine ecosystems.

And about that whole five-armed thing scientists have discovered distinctive starfish with more than five arms such as Coscinasterias Calamaria also known as the “11-armed starfish ” and the Antarctic Labidiaster Annulatus which has been found to have up to 50! M.K. Barnes