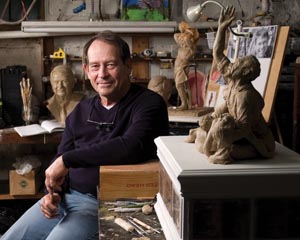 Sixty-six-year-old dentist and lifelong Wilmingtonian Dr. William Salling has come to recognize the magnetic draw of harnessing a creative mind to sculpt emotional renderings that pay tribute to the influential times and people in the local community. Tucked into the corners of Salling’s home on Summer Rest Road are pieces of bronze sculpture that speak loudly — without saying a word.

Salling’s story begins with a single event whereby he discovered a means to unleash his lifelong artistic aspirations … not in sculpture but as a dentist.

“When Sputnik went up. Sputnik of all things ” Salling says referring to the Russian satellite that was launched into orbit in 1957 “my junior high school principal Mrs. Williams gathered us all in assembly and gave us this impassioned speech in which she explained how the Russians had beat us in the space race and how it was our patriotic duty to study the sciences and math. I got to thinking: How can I combine art and science? Well lo and behold in my ninth-grade brain the answer was dentistry. I said ‘That’s what I’m going to be ’ and I never changed my mind.”

Salling didn’t discover the parallel between dentistry and sculpting until about 2006 when a patient at his dental office told him about Grace Napper a world-renowned sculptor who lived (and still lives) in Landfall and taught private lessons. Salling eventually contacted her and she took him under her wing training him in this most ancient of art forms.

Salling was taught to manipulate the same tools he uses as dentist — which were already comfortable in his hands — employing them to create detailed works of art. By properly utilizing utensils like a Hollenbeck Carver — that thin sharp metal tool with which a dentist scrapes teeth — Salling is able to scrape blocks of clay to create intricate renderings.

After the clay figure has been carved to Salling’s liking (which takes years for some pieces) he loads it into the car and drives it to Carolina Bronze Sculpture a company in Seagrove North Carolina that takes the work and dips it into wax creating a mold. Salling takes the wax mold home and defines more of the details. When each line and crevice is to his liking he drives it back to Seagrove and the foundry casts it in bronze.

The products of his work pressurized within a molded piece of metal alloy finished after what is often several dozen hours of intense attention and care either encapsulate the aura of influential figures in his life or make profound statements about social values.

Through the kitchen down a stairway that leads into the cold damp confines of the basement is Salling’s working studio. A large square table is flanked by a rectangular one. Amid the bits of hardened clay that dot the tables and the brown smudges smeared along every inch of the cement floor is an exhibit of his oil-based clay pieces.

The one in closest proximity depicts a man holding a dead woman and child (below left) while reaching an arm out to the heavens. Closely tucked against one of his sides is a second woman this one alive and gazing down at the lifeless body of the first with a solemn expression.

It is an entry piece for a competition that will choose a work to serve as a monument at the Oakdale Cemetery where more than 400 victims of the Wilmington yellow fever epidemic of 1862 are buried.

The piece Salling says represents a Confederate soldier who has just recently returned from the front where he expected to die to find that innocent people are dying.

“He’s got his wife in his arms beseeching the Almighty to take him instead ” Salling says. The piece is titled Take Me.

Three clay heads line one of the tables. One looks eerily familiar. It is Salling’s father William Salling Sr. who bears a strong resemblance to his son.

“It was such a healing experience to mold that ” Salling says remembering how he began crafting it not long after his father’s death. “It brought back so many memories. I could remember combing his hair when I was seven years old. I could feel his head. It has its origins as a tool for getting over his death. I highly recommend if you’re going to miss somebody mold them in clay and you’ll feel better.”

Sculpting a person is the highest form of recognition. A bronze work will stand unblemished for thousands of years keeping the person’s memory alive.

For now Salling seems content with practicing sculpture as a hobby. He won’t he says be giving up his dental practice for at least another five years. It’s safe to assume however that for the rest of his life Salling will spend a significant amount of down-time in his basement studio meticulously scraping blocks of clay as a means to speak loudly without saying a word. — Brian Freskos

A little something for the anti-romantic: The Anglerfish

Be sure you read that carefully — this fish is no angel.

The order of anglerfish is broad and reads like a roll call for oxymorons: frogfish goosefish batfish (among others). Many of the more than 200 species live as much as a mile below the surface inhabiting primarily the Atlantic and Antarctic Oceans.

In our shallower waters here off the east coast the goosefish is most common. Often three to four feet in length and weighing 50 pounds it is dubbed the “poor man’s lobster ” on account of a taste and texture reminiscent of lobster tail.

While the goosefish lends itself to generalization discussion of other anglerfish necessitates some careful distinguishing: Many species provide a prime example of sexual dimorphism (significant differences in form between male and female members of a given species).

In deeper waters a female anglerfish can weigh as much as 110 pounds. The feature that lends her her name is a fishing-rod-like protrusion (called the illicium from the Latin for “entice” or “allure”) that rises from above her mouth. Dangling from this rod is a lure of flesh (itself called the esca i.e. “food” or “bait”) which abounds with bioluminescent bacteria bobbing and glowing and appearing easy prey. In fact when would-be predators come to snatch it they become the prey themselves: the jaws of the anglerfish are triggered reflexively when the illicium is disturbed and her mouth is sufficiently large and her body sufficiently pliable that she can consume creatures up to twice her size. “They eat huge meals ” says fisheries biologist Fred Scharf a professor in UNCW’s Department of Biology and Marine Biology “because they don’t eat very often.”

A male anglerfish swims to an entirely different current. He is dwarfed by his female counterpart; in fact one species discovered by scientists at the University of Washington holds the record for world’s smallest vertebrate at 6.2 mm — though there is some debate over whether that title can go to a parasite. “This is actually a life history strategy that we see in some spiders and other creatures ” Dr. Scharf explains. “The female has to be the bigger one because she has to hold the eggs.”

Without the boon of an illicium and too tiny to fend successfully for himself a male anglerfish relies on his supreme olfactory sense to detect a female within range. When he finds one he bites onto her releasing an enzyme that fuses the skin of his mouth with that of her body ultimately mingling even the bloodstreams of the two. The male (sometimes one of six a given female may host simultaneously!) then gradually atrophies losing digestive organs then brain then heart then eyes … and is ultimately reduced to a pair of gonads fielding (understandably) the sole task of sperm production.

All told it’s not exactly an amorous courtship. But you’ve got to hand it to the anglerfish — that’s some knee-weakeningly clever evolution. — Ashley Newman-Owens

The International Language of love

Accordion music may put you in the mood more for foot stompin’ than for sweet romancin’ but there’s no small amount of ardor in this instrument’s denomination.

Though it bore minimal resemblance to the accordions we know today the first instrument to be so called was invented in 1829 by Cyrill Demian a Viennese piano-maker of Armenian descent. Similar instruments had been invented seven years earlier in Berlin but Demian sought a patent for his in light of a novel feature: depress one key and you’d activate an entire chord.

It was this multi-tone one-touch harmony that the name sought to capture: “Akkordeon ” from the Latin accordare (“to bring into agreement”) a verb built on the root word cor “heart.” Literally the sense of “accord” is to be “of one heart.”

Where’s the great love story behind passion fruit’s moniker? If you’re set on such an anecdote you’ll have to make it up yourself. Though the sweet fruit does grace many a dessert dish in mid-February the passion here is of a different sort.

The treat came by its name through the plant on which it grows whose unique structures struck Spanish missionaries of the 15th and 16th centuries as analogues to the story of Jesus’ crucifixion often referred to as The Passion. The passion flower’s radial filaments for example were taken to symbolize the crown of thorns; the ten petals and sepals stood for the ten faithful apostles.

The names other languages give to the flower — Spanish espina de Cristo (“Christ’s thorn”) and German Christus-Strauss (“Christ’s bouquet”) — are testament to this association: it’s not two lovers’ passion but rather the love of Christ that the christeners of this delicacy had in mind. — Ashley Newman-Owens

Pray for rain on Groundhog Day

Nobody would deny that these whistling burrowing alfalfa fiends are cute enough to merit their own holiday — but how exactly did groundhogs come by the honor? The answer goes back to the ancient European tradition of Candlemas. Observed (not coincidentally) on February 2 the holiday has for centuries been held to presage upcoming weather: as an old English rhyme has it

If Candlemas day be fair and bright

Winter will have another flight;

If on Candlemas day it be shower and rain

Winter is gone and will not come again.

The day was believed to mark the end of hibernation. If a creature emerged to discover winter would “have another flight ” it would reconsider and retreat. Throughout Europe prognosticators varied — a bear here a hedgehog there. The Pennsylvania Dutch imported the tradition to the United States initially through the medium of a badger but eventually the groundhog superseded even this forecaster establishing itself as something of a monopolist in the business of harbingering.

On a “fair and bright” day a groundhog sees its shadow and hurries frightened back underground to wait out the remaining 40 days of winter. On a day marked by “shower and rain” and accompanying clouds no shadow is visible and the groundhog encouraged remains above ground to await the imminent spring. — Ashley Newman-Owens