Doc Hussey reels them in on his 92nd birthday
File this under the category: Cool to know this is happening in our town 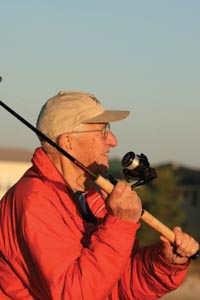 Except for a couple of months in the dead of winter you can find Dr. Howard Hussey a retired physician affectionately called “Doc ” happily casting off Wrightsvilles Johnnie Mercers pier each and every morning. In good weather or bad this 92-years-young gentleman joins a stalwart group of old salts who gather on the pier to make their first casts of the day as the early light of dawn peeps over the horizon. This small but regular group of fishermen has developed an easygoing camaraderie that revolves around their love of the water and the sport that they share.

Practicing medicine in the days when a general practitioner did it all Dr. Hussey delivered nearly 4 000 babies over the course of his career in Tarboro North Carolina where he set up a practice after serving as a battalion surgeon in Europe during WWII. After practicing medicine until he was well into his 70s he retired to Landfall in the early 1990s saying it was his love of ocean fishing that brought him and his wife Alice Leigh to Wilmington.

On a warm and sunny fall morning November 16 to be precise Docs 92nd birthday success is measured by a pile of bluefish caught as they made an early morning pass under Johnnie Mercers Pier. As a flock of seabirds dives on a school of baitfish a few hundred yards away excitement grows in anticipation of the approaching school and the bluefish that are driving them to the surface moving within casting range.

A good day on the pier fishing with friends at age 92 is about to get even better. Di Chamblee & Ted Poucher

When it comes to the future of Wrightsville Beach newly elected mayor David Cignotti cant stress the importance of long term planning and working together enough whether its for the goal of improving water quality developing a new parking plan strengthening relationships with other towns or preserving historic buildings. “Its not easy to do but if you sit down and face the work now our community will be better off in the future ” Cignotti says. 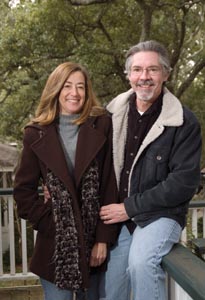 Currently the assistant principal at MCS Noble Middle School Cignotti moved from Jacksonville North Carolina to Wrightsville Beach in 1976 while a junior at University of North Carolina Wilmington (UNCW). He fell in love with the town and never left charmed by its neo-traditional character. His interest in town operations led him to apply for the Wrightsville Beach Planning Board and after three tries he was appointed to the board in 1994 was selected chairman of the planning board in 1998. He was then elected a member of the Board of Aldermen in 2005.

One of Cignottis specific priorities as mayor is to investigate ways to improve water quality in Banks Channel perhaps through a second collaborative study with UNCW marine ecologists to identify why certain areas are experiencing persistant bacterial pollution. He has expressed a desire to work more closely with UNCW in several areas. He also hopes to develop a new parking plan for Harbor Island.

On a larger scale the mayor is concerned during this economic downturn with finding external sources of revenue that will keep property taxes from skyrocketing. He is an advocate for older retired residents on fixed incomes like his father-in-law unofficial town historian Bill Creasy.

He plans to lobby for additional monetary support from New Hanover County and begin additional dialogue with the county on a variety of issues. “Most of our tax dollars go to the county and very few of those are returned to the beach ” Cignotti says repeating the common complaint of residents and elected officials. “We are asking the county to help us a bit more and realize that our residents are [county] constituents also.”

Cignottis immediate future has him retiring from his school position in spring 2010 which will give him more time to devote to the town.

“Im looking forward to working with the new board and I feel that we can work really well together ” Cignotti says. “Its crucial that everyone feels like a valued member.”

In his spare time the mayor is passionate about serving on the Wrightsville Beach Museum of History board of directors and other various beach clean-up and preservation projects spending time with his wife Susan Creasy (the SAGE teacher at Gregory Elementary School of Math and Science) running the John Nesbitt Loop and getting back into surfing. Lindsay Key

Contra Dance
Need a reason to leave the house get moving and meet some great people?

If youre the type of person who gets that deer-in-the-headlights look at the prospect of dancing socially worried that youll be caught in the blinking lights of the dance floor without a cameo move the Cape Fear Contra Dancers club may have an acceptable alternative for you. 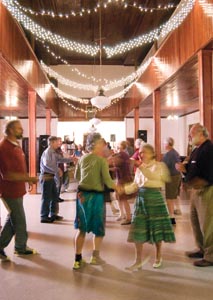 At dances held at 5th Avenue United Methodist Church on the second and fourth Tuesdays of each month “everyone dances with everyone ” club president Phoebe Hood says. Better yet a caller dictates each move similar to a square dance. The difference is that contra dancers stand in two long lines facing a partner and gradually move down the line as patterns are called.

Contra dance originated at the end of the 17th century when the French stumbled upon the English country dance and added a French flavor to it renaming it contra-dance or contredanse. The English-French hybrid tradition made its way to America where its enjoyed an intermittent popularity losing its fashion sense in the mid 19th century to square dancing and couple dances like the waltz and polka but re-gaining it in the 1950s thanks to Contra enthusiasts Ted Sannella and Dudley Laufman. The dance was first revived in the small towns of New England before spreading to the rest of rural America preserving its root ideal of being a “country” dance.

Formed in the early 1990s the Cape Fear Contra Dancers club is home to a core group of 30 to 40 people who regularly pay dues and attend dances. Beyond that the club is joined by new visitors each week ranging in age from 12 to 90. “We really try to make them feel welcome ” Hood says. At a typical Tuesday night dance theres usually a crowd of 30 whereas at the Saturday night dances held on the fourth weekend of each month theres a larger crowd of 60.

Dancers groove to the Celtic bluegrass strains of Wilmington favorites Out on the Ocean. There is no alcohol (though snacks are sometimes served) or dress code (informal is best) and admission is $3. For more information visit www.wilmingtoncontradance.info. Lindsay Key 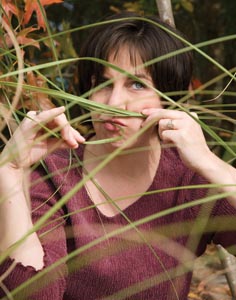 Wilmington comedienne Brooklin Green has no idea why her four-year-old son has an imaginary friend. “Its probably due to something I did which is totally fine they [imaginary friends] are so much less high maintenance than play-dates ” she says with a smile. Its these sorts of reflections on the weirdness of motherhood and family life that get Greens audiences laughing during her stand-up routines.

Originally from Oklahoma Green migrated to the Chicago theater and comedy scene enrolled in the highly regarded Second City Conservatory and began landing comedic roles in theatrical performances in Chicago New York and the southeastern U.S. But it wasnt until shed been living in Wilmington for a few years (having moved here for her husbands teaching job at Cape Fear Community College) that she performed her first stand-up show eight months pregnant with her second child.

Fortunately Greens family life doesnt compete with her professional life she gets her best material from it. In all seriousness Green has no complaints about the Wilmington comedy scene. “I think theres definitely an interest in it and we definitely have plenty of people doing it. We just hope that it continues to grow ” she says. Lindsay Key 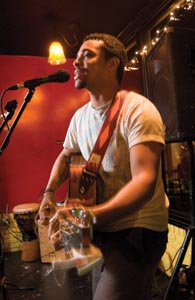 The 31-year-old Wilmington singer/songwriter has dabbled in every musical style imaginable but the main thread in all his musical interests has been the experience of music itself. “Music is life and life should be about inspiration and passion ” Collins says.

Born in Los Angeles Collins moved outside of Bladenboro North Carolina with his parents when he was seven. Son to a trumpet-playing father and a classical guitar-playing mother there was never any doubt in his mind that he would also pursue music during his lifetime it was just a matter of when.

He started playing guitar at 14 and moved to New York when he was 20. A former romantic relationship brought him to Wilmington in 2004 and it was in this small coastal city that his musical epicenter gained power.

In 2004 he released his first single Missing Faces which was composed for the local CUE Center for Missing Persons after a member saw Collins playing in a local bar and asked him to take on the project. That same year he helped form accompanying band The Getaway Drivers with drummer Dan Maggio bassist Eric Vithalani and percussionist Sonny Cordilleras. The next few years were filled with the release of the full-length album Through My Eyes (2005) a compilation album entitled Helping Hands Volume 2 (2008) and a two-song single Yellow Summer Days (2008).

Collins keeps a full tour load playing festivals on the road and circulating the local scene. He also teaches guitar and percussion at DREAMS Center for Arts Education a local nonprofit devoted to building character and self-esteem in young people through involvement in the arts. Lindsay Key

Heres a little Beach Bite quiz for you: Which magnificent Southern plant slung along the tops of live oaks and bald cypresses cascading down branches quivering in the ocean breeze and shimmering in the late afternoon sun is linked to the following folk tale?

In the 18th century a Spanish traveler and his fianc were visiting Charleston South Carolina to find land suitable for a plantation. While in a beautiful rolling field they were attacked by a band of Cherokee Indians hiding in a surrounding forest. One warrior cut off the long raven-colored hair of the bride-to-be as punishment for trespassing and threw it up into an old oak tree where over time it turned gray and spread to the next tree slowly making its way across the South.

Its creeping appearance is no illusion. Distinguished scientifically as an epiphyte the plant lives on other plants but oddly is not a parasite it gets its nutrients from the water and air. Other well-known epiphytes include mosses lichens and seaweed. A flowering plant with aerial roots its hard to believe that the moss is a first cousin to the pineapple through their shared Bromeliaceae family grouping a family that thrives in hot humid climates from the southeastern United States to Hawaii to Argentina.

In modern cultures the moss is used as filler and around the bases of potted plants. It remains an aesthetic commodity and local public viewing sites include Airlie Gardens and Orton Plantation. Lindsay Key