Will the real santa claus please stand up?
Not to worry … These guys have a direct line to the big man himself

Every Christmas one question arises: How does Santa get to all those parades department stores and parties at the same time?

Fortunately for Santa and Mrs. Claus our area has its own cadre of Santa stand-ins to make sure no child’s wishes go unheard. Because Santa can’t be everywhere at once we asked our local Santa stand-ins to share their Santa stories with us and in true Santa fashion they delivered. 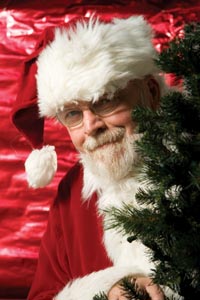 “In order to be a good Santa Claus you have to truly become Santa Claus.”

Robert Blair’s earliest experience as Santa Claus was the Christmas of 1957. His father was in the Navy stationed in Argentia Newfoundland when he first embodied the spirit of Christmas: A photo still exists of a four-year-old Blair cotton balls stuck to his entire body mimicking good old Saint Nick.

But Blair didn’t end up donning the red suit again until his mid-30s when his duties as a member of the Optimist Club of Winter Park called him to action. During the club’s annual Hugh MacRae Christmas tree sale they offered hayrides. Who better to accompany the children than Santa Claus himself? That first gig was rough Blair says “The fake beard and wig were so hot and you can’t eat in it either!” Perhaps that’s what spurred him to grow his own beard; he now wears white on his chin year-round.

Since then Blair has gotten nothing but joy out of being Santa. His philosophy is that “in order to be a good Santa Claus you have to truly become Santa Claus ” and so Blair has done just that. Even in the middle of July children drop their jaws tug at the tails of their parents’ shirts and say “It’s Santa.” 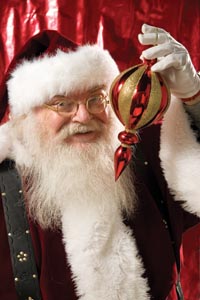 “You just can’t describe the warmth in your heart.”

Dwayne Barlow describes his experience in the Santa suit as being a “different kind of situation. You just can’t describe the warmth in your heart.” Barlow says that warmth “comes from knowing you’re putting warmth in others’ hearts.”

Barlow has been dressing up as Santa Claus for 19 years and says it all began when his daughter decided to get married on the Henrietta Riverboat. Carl Marshburn captain of the Henrietta mentioned in a casual conversation with the father of the bride that he’d like to get someone to dress as Santa Claus for a cruise to raise money for the Salvation Army. Prior to that conversation the thought of becoming Santa Claus never even crossed Barlow’s mind. He put on the red suit and the rest is Santa history.

Since then Barlow has found great fulfillment in dressing as Santa even outside the Port City; he volunteers at the New Hope Valley Railroad’s Santa Train every year. For many years — prior to time and age catching up with him — Barlow even went to great lengths to bleach his beard white. Now he laughs “It’s all white. I don’t even need a hairdresser.” His beard is so authentic that sometimes even when he’s out of costume he finds himself winking at children and saying “You never know where Santa’s going to show up.”

A nurse by profession Barlow works with nursing home residents and finds it most rewarding to dress as Santa Claus to visit the elderly. He says “They light up when Santa walks in. There’s nothing more worthwhile than giving happiness to the residents.” Sometimes Christmas is mistaken as a holiday for children but Barlow as Santa proves it’s just as much a holiday for adults.

Marty Shirah host of 980 WAAV’s morning show “Talk of the Town ” became Santa in an unlikely way. In 1982 he was tired of working as a car salesman so he quit his job. Unemployed and walking through a mall in Columbia South Carolina he recalls stopping to speak to an “elf” about working as Santa Claus. “I’ve always loved Christmas ” Shirah says. “It has always been a special time for my family so it seemed only natural to at least ask.” He was hired on the spot. The next day his four-hour shift turned into a 12-hour shift!

What was unique about his stint as Santa in Columbia is that Shirah imitated the voice of Santa Claus from the original 1964 movie Rudolph the Red-Nosed Reindeer. Ever since fifth grade Shirah has been able to do character voices of just about anyone so his flair for sounding like the real McCoy helped stage his life-long love of bringing joy to others.

The real payoff came later while working as Santa at another mall in Lumberton North Carolina. As he sat in his chair attending to the children Shirah noticed a small girl approaching — he noticed her because of the way she clung to her mother. When it was finally her turn to sit with Santa he realized she was blind. The girl had been listening to him as she waited in line and before Shirah had time to say anything she whispered in his ear “I know you’re the real Santa. I hear you on the Rudolph movie.”

Shirah says “bells went off” inside his head. “This is why I do it ” he thought.

Everyone loves Airlie Gardens; let’s start there. All year-round Airlie’s magnificent 67 acres attract visitors for their serenity and breathtaking beauty. Even during the cold of December visitors can (and do by the thousands) experience the wonder of this local treasure during Airlie Gardens’ annual Enchanted Airlie. 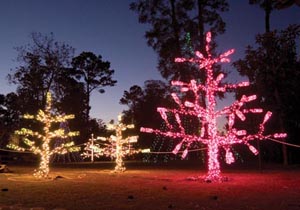 Since the tradition began in 2005 people have flocked to Airlie to view the gardens in a whole new light … or lights … literally. Airlie’s twist on the age-old family tradition of gazing at Christmas lights is this: Friends and families have the opportunity to experience the spirit of the season with a stroll through the gardens which have been decorated with hundreds of thousands of lights.

Setting up and then breaking down the lights takes six months but that’s understandable when you consider that there are an estimated six miles of cord and 250 000 LED lights being strung by hand! Airlie superintendent Andy Johnson says this year’s lighted celebration will be “bigger than ever.”

Janine Powell Airlie Gardens’ director of donor relations says Enchanted Airlie began as a way to bring families together during the holiday season. “Not only Wilmington families enjoy the gardens ” says Powell “even out-of-towners who are here for the holidays get to appreciate the show.”

The Friday after Thanksgiving — November 27 — kicks off the fifth year of Enchanted Airlie and there are ample opportunities to enjoy the show every weekend through December 22. Powell estimates that the entire tour takes two hours. Airlie is offering the economical option of $20 carload tickets (excluding large passenger vans and buses) for those wanting to bring the whole family. Individual tickets are $5 for adults $4 for children ages 4-12 and free admission for children under the age of 4. Individual ticket holders must also purchase a parking pass for $3. Enchanted Airlie is wildly popular and tickets sell out fast every year. They’re available online now at www.airliegardens.org. Call (910) 798-7700 for more information. 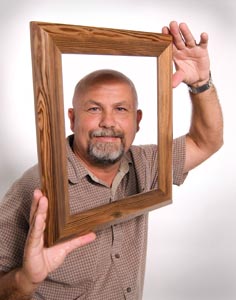 Local contractor Carl Wells is celebrating the past in a wonderful way. Using recovered river wood and reclaimed wood from old local structures Wells creates custom picture frames that encapsulate an earlier but hopefully never forgotten Wilmington. By recycling this wood Wells is not only going green he’s also appreciating days gone by. Historical buildings like Wrightsville’s The Glenn are slowly disappearing but some remnants make it past the razing; that’s where Wells steps in. “I hate to see old structures be demolished ” says Wells “but if you can’t keep the original structure at least these picture frames can reclaim the building’s memory through art.” Wells sees the fulfillment his picture frames bring to those who have had to say goodbye to important landmarks in their lives and hopes to preserve the past for years to come.

Literally translated from Hebrew as “candlestick ” the nine-branched menorah is used during the Jewish celebration of Hanukkah — also known as the Festival of Lights — to signify remember and rejoice in the eight-day miracle surrounding the holiday’s beginning. 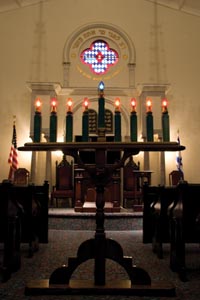 A successor of Alexander the Great Antiochus IV Epiphanes ruled the lands of Syria Egypt and Judea. In 167 B.C.E; Antiochus IV and the Greco-Syrian army defiled the holy Temple in Jerusalem and banned Jewish practice as part of an intensified campaign to impose their Hellenistic culture on the Jews. A family known in Jewish lore as the Maccabees — led by the five sons of Jewish High Priest Mattathias — rebelled against the destruction of their religion and culture and fought a three-year war against Antiochus that culminated in the defeat of the Greek army.

Judah Maccabee (one of Mattathias’ sons) and his soldiers went to the holy Temple and were saddened by its desecration including the damaged menorah. They cleaned and repaired the Temple and wanted to have a jubilant dedication ceremony to celebrate the Temple’s restoration.

Since the Jews had been unable to celebrate the holiday of Sukkot at its proper time (in early autumn) it was decided that Sukkot which lasts seven days would be the celebration. And as part of the ceremony they wanted to light the menorah.

They found a small flask that contained only enough oil to light the menorah for one day. As an act of faith they used the oil anyway — on the 25th day of the month of Kislev in the year 164 B.C.E. — and the lamp miraculously remained lit for eight days enough time to obtain and purify new oil.

Today Jews celebrate Hanukkah which translates from Hebrew as “dedication ” for eight days by lighting candles in a menorah. Each night another candle is lit to symbolize the continual eight-day flame that burned in the Holy Temple of Jerusalem.

Hanukkah reminds Jews that God is an ever-present force in their lives says Rabbi Harley Karz-Wagman of Temple of Israel in Historic Downtown Wilmington. “Not only is the menorah a symbol of religious freedom ” says Karz-Wagman “but its light also allows us to see and understand and the flame provides warmth comfort and insight.”

Rabbi Karz-Wagman reminds us that “even if it feels like we don’t have enough resources for whatever we try to accomplish if we light that first candle the world may surprise us with more goodness and help then we’d ever expect to receive.”

This year Temple of Israel (1 South 4th Street) will host a public Menorah Lighting Celebration. The first candle will be lit Sunday December 13 at 5 p.m. Traditional Hanukkah celebrations will follow including dreidel spinning latke eating music storytelling and more! Each subsequent night of Hanukkah Temple of Israel will light another candle. Rabbi Karz-Wagman encourages everyone to attend. For more information call (910) 762-0000.

Native to Mexico the poinsettia was brought to the United States in the 1820s by Ambassador Joel Roberts Poinsett. Accompanying this pretty plant were many adaptations of a long-standing legend that goes like this …

A small Mexican girl orphaned and empty-handed went to Christmas mass to honor the birth of Christ. Upon arrival others scolded her saying she should be ashamed to come to mass without a gift to offer Jesus. The child left only to return with a bundle of weeds she’d collected near the side of the road. As she walked toward the altar people ridiculed her lowly offering but it was all she had. As she laid her meager bundle by the altar a miracle happened. The weeds bloomed into magnificent red petals more beautiful than any of the more expensive gifts. Those who had scolded her were now in awe of the brilliant petals — la flor de Nochebuena — the Christmas flower.

The story behind the poinsettia reminds us that a gracious gift of love far exceeds any opulent gift that lacks sincerity. This Christmas perhaps your gaze will linger on the poinsettia not only for its beauty but also for its meaning.