If you’ve been counting down the days since last November count no further. On Saturday November 28 the 26th annual North Carolina Holiday Flotilla returns to light up the night.

Following the 6 p.m. fireworks display some 50 000 fans will again be dazzled as bejeweled vessels glimmering with lights embark on their stately procession down the Intracoastal Waterway. Decked to impress the boats will proceed up Mott’s Channel and along South Harbor Island to the bridge where they’ll turn and cruise by the judges’ booth on Banks Channel (in front of the Blockade Runner Beach Resort and Hotel Conference Center) to complete their course at the Coast Guard Station. 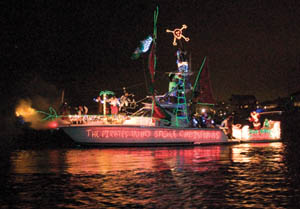 Hopeful captains and crews will compete for cash awards in five categories — and for this year’s grand prize a four-night stay at The Reefs Atlantis Resort in the Bahamas.

No less memorable than the boat parade are the festivities that precede it. On Friday night November 27 don’t miss the weekend’s Tree Lighting Ceremony at Wrightsville Beach Town Hall where Santa and Mrs. Claus will be on hand to usher in guests and good cheer. A Toys for Tots drive will run throughout the evening’s events so bring a special toy to donate! After the mandatory 6:30 p.m. Friday-night captains’ party at the Blockade Runner indulge in an evening of music fun and friends at the Holiday Party. Anyone can purchase a ticket to this.

Come back energized for a full slate of entertainment starting at 10 a.m. on Saturday with the much-anticipated festival in Wrightsville Beach Park. Bring the family for an afternoon of arts and crafts amusements tasty treats and live entertainment. Be sure to check out the classic car show and say hello to major league baseball player and former New Hanover County High School baseball star Trot Nixon.

For those who can’t wait for the fun to begin the second Holiday Flotilla 5K an early morning run around the Loop starts at 9 a.m. on Saturday November 14. “We’d like to make this year bigger and better than ever before ” says Ashley Miller Flotilla co-chair. “Our mission is to bring visitors who will support and enjoy the many shops restaurants and hotels Wrightsville Beach has to offer.”

If you’ve got a boat — and a competitive fun-loving spirit — the Flotilla wants you. The more the merrier is the rule and all entrants who register before the Friday evening captains’ meeting are eligible for the parade. For more information or to register for either event call (910) 256-2120 or visit www.ncholidayflotilla.org.

Gem of the Sea

They go way back.

Cleopatra bested Antony in a wager for the most extravagant meal in history when she dissolved and then swallowed one worth ten million sesterces. Ancient Chinese superstition holds that they fall to the ground à la meteorites when the blue dragon and the yellow dragon battle in heaven. And Shakespeare’s cocksure Pistol immortalized their value when he declared the world “mine oyster” (The Merry Wives of Windsor c. 1600).

Pearls’ allure is universally known … but where do they come from and how closely do they relate to those succulent shuckables you might have savored at Stone Crab a few nights ago? Had you exercised greater willpower would those oysters have birthed you a fortune? 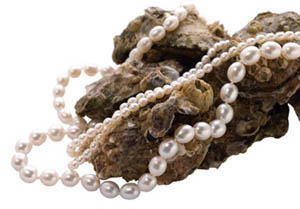 Thankfully the answer is no. Taxonomy eliminates the need to choose between gemstones and dinner allowing you to have your pearl and eat it too.

The oysters that produce the pearls you’d want to wear hail from the family Pteriidae. An oyster shell is lined by a thin organ called the mantle which secretes nacre also referred to as mother-of-pearl. When a parasite invades the oyster and adheres to the mantle nacre production is amplified to surround and trap the intruder sequestering it for the protection of the oyster. Like magic a pearl turns an irritant iridescent.

Tracing their heritage to a different clan — the Ostreidae family — are the oysters you eat. But in addition to being delicious and nutritious (one gram of protein towards your daily value for every oyster enjoyed) oysters work wonders on an ecological level and are considered a keystone species because of the crucial role they play in sustaining the entire ecosystem. (Just as an arch collapses without its keystone so does an ecosystem crumble without its oysters.) A healthy oyster reef can house more than 300 different organisms: algae barnacles crabs and many others. What’s more oysters are filter feeders filtering excess plankton sediment and nutrients and expelling organic components back into the water. A single oyster can filter up to 50 gallons of water per day; thus oysters are instrumental in both cycling nutrients and maintaining water quality.

The bad news: The population of Eastern Oysters (Crassostrea virginica) the species of oyster found off the coast of North Carolina has suffered a 90 percent decline over the past century. The good news: The North Carolina Division of Marine Fisheries (NCDMF) is working to reverse this trend through its innovative Oyster Shell Recycling program. The program has established shell recycling barrels in hundreds of sites throughout the state and the shells from these barrels are returned to select shallows to form the nuclei of new oyster reefs. (Thanks to this effort a thriving oyster reef now inhabits the area between Banks and Back Channels.)

The Oyster Shell Recycling program is an important step towards restoring native oyster populations and their habitat … and guess what: you can help. Many local restaurants participate in the program and you can too by bringing your shells to any of the 13 public shell recycling locations all along the Azalea Coast.

“We strongly encourage everybody to recycle their shells ” says Stephen Taylor a shellfish biologist at the NCDMF “and to tell all their friends to recycle their shells too. When it comes to oysters every little bit helps!” For a list of public shell recycling locations or additional information call the Division of Marine Fisheries at (910) 796-7289 or visit www.ncdmf.net.

Cucalorus is no ordinary film festival. What started 15 years ago as a one-night one-screen affair has garnered so many plaudits for its unparalleled patchwork of independent documentaries features and shorts that it now spans four days and as many venues.

Perusing the festival’s itinerary it’s easy to become overwhelmed. Not to worry — this year Cucalorus has constructed some useful categories to help you. The “Buzz” program for instance showcases hits from the festival circuit; the “Voices” program politically- and socially-aware documentaries. Festival director Dan Brawley recommends the shorts blocks (comprising five or six films each) as “chances to get a sampling from the next generation of filmmakers just as they’re getting started.”

From its modest beginning — 16 films all made by North Carolinians — Cucalorus has expanded to include more than 100 films from all over the world but its focus is still emphatically trained on the filmmakers. Many screenings are followed by Q&A sessions that provide forums for audiences and filmmakers to connect and trade ideas; between films the schedule is dotted with panels parties workshops and special events such as Dance-a-lorus which brings filmmakers and choreographers together to blur the lines between their respective media.

Write down the dates: Wednesday November 11 through Sunday November 15. For tickets or more information call (910) 343-5995 or visit www.cucalorus.org.

The Met — Live in HD

For years you’ve been hoping for looking for listening for the inimitable sounds of the New York Metropolitan Opera to reverberate down the Eastern Seaboard. Well … take a seat in UNCW’s Lumina Theater (located in the Fisher Student Center) and you’ll find just what you seek.

UNCW’s Osher Lifelong Learning Institute and Department of Music bring you a full season of stunning performances through the The Met: Live in HD a series that has already collected both an Emmy and a Peabody Award. Taking the big screen by storm will be live high-definition broadcasts of the following (all performances begin at 1 p.m. unless otherwise noted):

Thinking about gobbling a second helping at Thanksgiving dinner? No problem. Exercise it off in advance at the 5th Annual Turkey Trot on Thursday November 26 8 a.m. Thanksgiving morning.

Grab your sneakers flock to the John Nesbitt Loop at Wrightsville Beach and pick your pace — participants can choose to run the 2.4-mile course or savor the stroll as part of the one-mile Gobbler Family Fun Walk. As a perk for the poults (baby turkeys y’all) children 10 and under trot free!

“It’s a really fun family-friendly event on Thanksgiving morning before everyone sits down to break bread together ” says Kitty Yerkes of Cape Fear Habitat for Humanity. “One hundred percent of the proceeds support Cape Fear Habitat and the community’s effort to build safe decent affordable housing for deserving families — so that they too have a place to sit down and break bread together.”

For tickets or additional information call Kitty Yerkes at (910) 762-4744 (ext. 102) email her at [email protected] or visit www.wilmingtonturkeytrot.com.

Care for a splash of color with your weekend? Smiley faces feline soccer stars superheroes mammoth lady bugs … if you can conceive it chances are you’ll find it overhead at the 4th Annual Cape Fear Kite Festival streaking the Wrightsville Beach sky on November 7 and 8 from 10 a.m. to 5 p.m. in front of the Shell Island Oceanfront Suites. 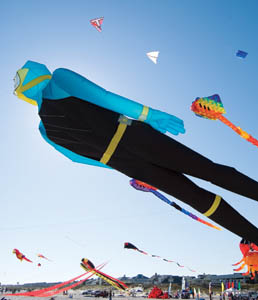 Soak up rays and rainbows as more than 100 kite aficionados from all over the world set their treasures soaring in vibrant display. If you’re feeling adventurous watch the pros maneuver their dual-lined sport kites into nose-diving back-flipping feats then sign up for a stunt kite lesson and reel out your own inner daredevil. The kids — and the young-at-heart — can flaunt their artistic flair by constructing decorating and (of course) flying kites of their own creation.

This year’s festival promises a special treat in the realm of — you’ll never guess it — octopuses. History has yet to witness more than 21 giant octopuses simultaneously aloft (a record coup that transpired in Lincoln City Oregon last June) but this weekend an ambitious brigade of kiters hopes to establish a new record. These creatures festival front man Mike Agner assures are no small matter registering more than 100 feet from head to tentacle tip.

Fantastic and fleeting — and completely free! — this event is a marvel not to miss. “Kite flying ” Agner says “is intensely art of the moment ” unspooling in real time for both artist and audience. That — and it’s not every day that a tilt of the chin might reveal 176 legs waving in concert above you.