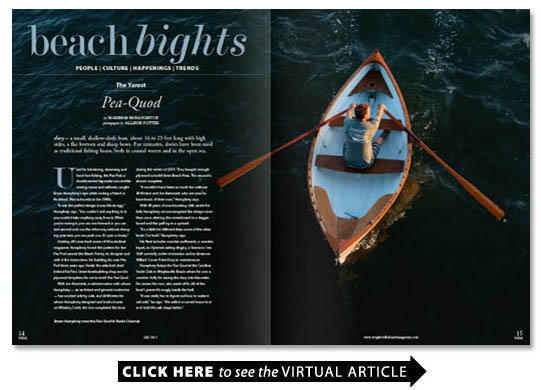 dory a small shallow-draft boat about 16 to 23 feet long with high sides a flat bottom and sharp bows. For centuries dories have been used as traditional fishing boats both in coastal waters and in the open sea.

Used for lobstering clamming and hand line fishing the Pea Pod a double-ended lapstrake convertible rowing canoe and sailboat caught Bryan Humphreys eye while visiting a friend in Rockland Massachusetts in the 1990s.

It was the perfect design; it was like an egg Humphrey says. You couldnt add anything to it; you couldnt take anything away from it. When youre rowing it you can row forward or you can turn around and row the other way without changing your seat you can push row. Its just so boaty.

Dusting off some back issues of WoodenBoat magazine Humphrey found the pattern for the Pea Pod named the Beach Pea by its designer and with it the instructions for building his own Pea Pod three years ago. Under the attached shed behind his Pine Street boatbuilding shop are the plywood templates he cut to mold the Pea-Quod.

With Joe Hammett a cabinet maker with whom Humphrey an architect and general contractor has worked side by side and Al Winters for whom Humphrey designed and built a home on Whiskey Creek the trio completed the boat during the winter of 2011. They bought enough plywood to build three Beach Peas. The second is almost complete.

It wouldnt have been as much fun without Al Winters and Joe Hammett who are soon to have boats of their own Humphrey says.

With 40 years of woodworking skills under his belt Humphrey circumnavigated the design more than once altering the centerboard to a dagger board and the gaff rig to a spritsail.

Its a little bit different than some of the other boats Ive built Humphrey says.

Humphrey keeps the Pea-Quod at the Carolina Yacht Club in Wrightsville Beach where he uses a wooden dolly for easing the dory into the water. He carries the oars also made of fir. All of the boats pieces fit snugly inside the hull.

It was really fun to figure out how to make it sail well he says. We added a curved boom to it so it held the sail shape better.

He also added wooden cleats to secure the lines while tacking and a ratchet block that pulls in easy but lets out hard he says.

The traditional Pea Pod fishing dory is a solo operation inshore holding up to three crew or passengers or is one among a fleet of tenders for a larger boat. Loaded onboard and carried out to sea the Pea Pods are lowered into the water for fishing a long hand line. Fishermen return to the mother ship with the catch.

Last spring Humphrey and friends used the Pea-Quod this way. Sailing a bigger boat with the Pea-Quod in tow from Beaufort he says We got up there to Cape Lookout Bight. In theres a giant basin. Its way out in the ocean. Youve got a whole lot of breeze blowing at it but its protected; therere no waves.

They anchored the larger cruising sailboat launched the Pea-Quod and sailed around the bight for about six hours.

As the sun was going down fish were feeding and wed just sailed through and catch a fish on the hand line sail through again and catch another one.

On the return trip Humphrey sailed the Pea-Quod in the open ocean from Cape Lookout back to Beaufort.

Its got a certain historic pedigree that anybody who sees you rowing or sailing has to comment on it Humphrey says. Its the essence of boat.

skiff a small boat traditionally coastal or river craft used for leisure or fishing with a one-person or small crew.

Masonboro Skiff boatbuilder John Olsen says We built it cause its just the ideal boat for this area sneaking behind the channels.

One morning last month Olsen and business partner Larry Heckner poked out the inlet to see what the fishermen were doing. With plenty of freeboard the height above the waterline from the sides the flat-bottomed skiff handled the four-foot rollers and nobody got wet.

The first skiff off the new line has turned heads in the water and on dry land.

And touch it they have as the Masonboro Skiff has made the rounds of regional wooden boat shows its also racked up a few awards.

The judges comments have been consistent Heckner says.

The editor of the WoodenBoat magazine came to the Georgetown (South Carolina) show and said Great design excellent execution.

The design execution was tweaked by Olsen who grew up at Olsens Boatyard in Bayshore Long Island.

The boat was designed to be a small harbor boat a work boat fishing on the weekends clamming oystering. For the sportsman the boat could be fitted with a tiller a more open area for decoys and guns or the size of the casting platform increased for fly fishermen. Its ideal for taking the family to the beach wife kids and dog load them in with a couple of coolers an umbrella and go Olsen says.

Hes comfortable taking the boat to Buzzard Bay near Fort Fisher across the Cape Fear to Bald Head Island.

I like to see land Olsen says. Its not a big boat and you have to pick your days.

In the early 1990s Olsen studied boat building at CFCC under David Flaglers direction. Now he operates his own boat repair business which is how he met Heckner a retired lobbyist whose 1964 Great Lakes Lyman sleeper the Miss Athalia needed repair.

When I retired I wanted a job where I could wear shorts that had a hole in the leg maybe four a T-shirt with a hole maybe four and feel oyster shells beneath my feet Heckner says.

We think its important people are still building this way Olsen says. A lot of these techniques are being lost. Theyre good and theyre valid. Youll never see a fiberglass boat appreciate in value like a wooden boat. Not many people ever pass down a fiberglass boat to their grandchildren. Its handmade its special.

A classic boat town like Wrightsville Beach should have classic boats running around Heckner says.

loving cup a large ornamental vessel usually made of silver and having two or more handles given as an award in modern sporting contests and similar events.

Walter Marines family lore handed down from one generation to the next has canonized this loving cup. As the story goes a storm blew up on July 4 1914 capsizing a party fishing boat captained by Marine. Fourteen men were tossed into the sea four did not know how to swim. Capt. Marine was able to save three but the fourth did not make it.

Marine from Marine North Carolina had been reared in Onslow County. His granddaughter Katherine McKenzie of Landfall says To me he had one of the most idyllic lives. He fished in the summer and hunted in the winter.

Her ancestors she says including her great grandfather who was listed in the census as a merchant and gentleman farmer had tobacco fields with tenants a store salt mill lumber mill and a fleet of cargo ships.

To commemorate his heroic rescue the surviving members of that fateful fishing trip awarded him a silver loving cup for his skill and daring on July 4 1914.

Its a beautiful thing McKenzie says thats always been a treasure in our family.