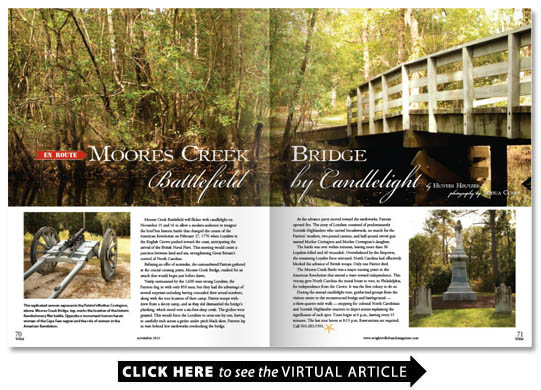 Moores Creek Battlefield will flicker with candlelight on November 15 and 16 to allow a modern audience to imagine the brief but historic battle that changed the course of the American Revolution on February 27 1776 when Loyalists to the English Crown pushed toward the coast anticipating the arrival of the British Naval Fleet. This meeting would create a junction between land and sea strengthening Great Britains control of North Carolina.

Refusing an offer of surrender the outnumbered Patriots gathered at the crucial crossing point Moores Creek Bridge readied for an attack that would begin just before dawn.

Vastly outmanned by the 1 600 men strong Loyalists the Patriots dug in with only 850 men but they had the advantage of several surprises including having concealed their actual numbers along with the true location of their camp. Patriot troops withdrew from a decoy camp and as they did dismantled the bridges planking which stood over a six-foot-deep creek. The girders were greased. This would force the Loyalists to cross one by one having to carefully inch across a girder under pitch black skies. Patriots lay in wait behind low earthworks overlooking the bridge.

As the advance party moved toward the earthworks Patriots opened fire. The army of Loyalists consisted of predominantly Scottish Highlanders who carried broadswords no match for the Patriots muskets two-pound cannon and half-pound swivel gun named Mother Covington and Mother Covingtons daughter.

The battle was over within minutes leaving more than 30 Loyalists killed and 40 wounded. Overwhelmed by the firepower the remaining Loyalist force retreated. North Carolina had effectively blocked the advance of British troops. Only one Patriot died.

The Moores Creek Battle was a major turning point in the American Revolution that started a wave toward independence. This victory gave North Carolina the moral boost to vote in Philadelphia for independence from the Crown. It was the first colony to do so.

During the annual candlelight tour guides lead groups from the visitors center to the reconstructed bridge and battleground — a three-quarter mile walk — stopping for colonial North Carolinian and Scottish Highlander enactors to depict scenes explaining the significance of each spot. Tours begin at 6 p.m. leaving every 15 minutes. The last tour leaves at 8:15 p.m. Reservations are required. Call 910-283-5591.