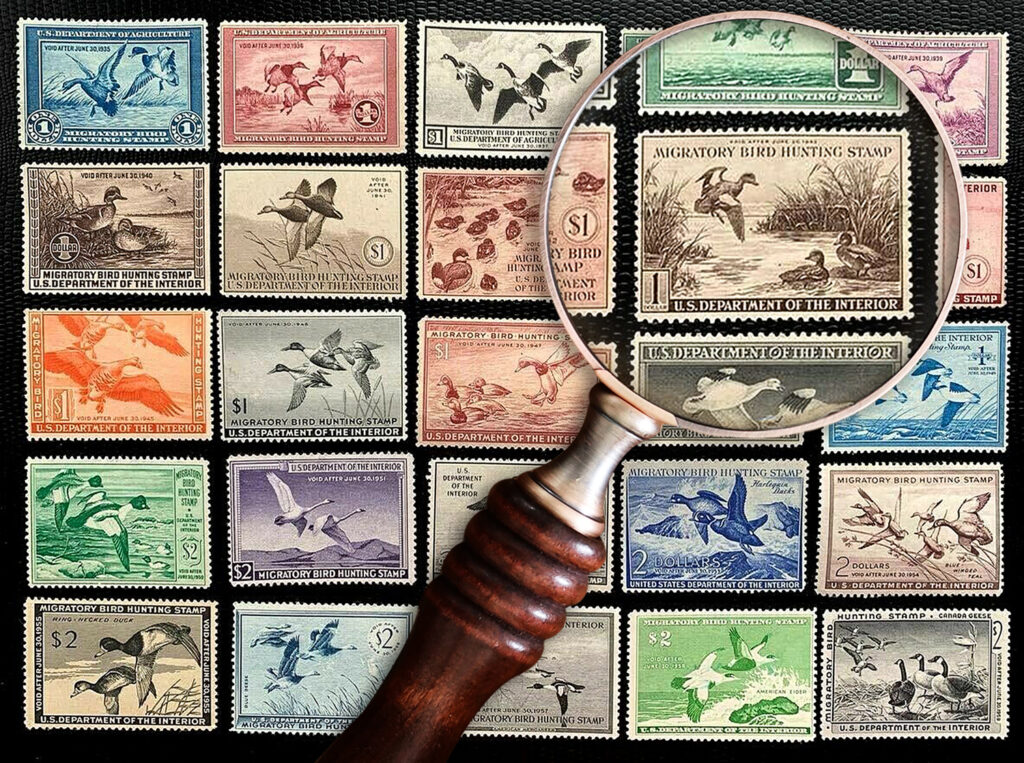 Hunters must purchase and sign a Federal Duck Stamp to legally hunt waterfowl. The nearly $40 million per year proceeds from the stamp and artwork land in the Migratory Bird Conservation Fund to preserve over 6 million acres of wetlands vital to migratory birds and other species of animals.

Stamps are valid July through June and cost $27 for the 2022-23 season. The original stamp cost only $1 to obtain hunting rights. That’s not really much inflation for 86 years of conservation.

While hunters ages 16 and above are required to have them, anyone can purchase a Duck Stamp. It is an easy way to help preserve waterfowl while collecting a unique piece of art.

Early duck stamps were printed in basic one-color ink. Now the stamps show vivid colorful birds about to fly off the canvas.

The first duck stamp was a brush and ink drawing of mallards by Jay N. “Ding” Darling, a famous cartoonist and conservationist. Darling conceived the idea of using the stamps to raise money for the purchase of wetlands.

Since 1990, a family of Minnesota brothers, James, Joseph and Robert Hautman, have collectively won the contest 12 times. James Hautman’s winning image in 2017-18 portrayed Canada geese in flight. His brother Joseph won the previous year with a painting of graceful trumpeter swans. And Robert received a perfect score for his image of mallards landing, the 2018-19 stamp winner.

The Hautman brothers were commissioned by the United Nations to paint a series of endangered birds. The painting brothers are mentioned in the movie Fargo, and were featured in the documentary The Million Dollar Duck. Their work has appeared in national and international magazines and has been displayed in the Smithsonian, the Oval Office of the White House, the United Nations, and in private collections worldwide.

The first female to win duck stamp prestige was Vermont artist Nancy Howe with a pair of king eiders standing in the marsh for the 1991-92 season.

Judging for the 2023-24 stamp will take place in September at the North Dakota Heritage Center & State Museum in Bismarck. The public can attend the judging. The species selected for the art focus this year are tundra (whistling) swan, mottled duck, American green-winged teal, American wigeon and Barrow’s goldeneye.

Hunters, artists and stamp collectors can purchase duck stamps at outdoor stores or from the U.S. Fish and Wildlife Department.

Ninety-eight percent of the revenue goes directly to acquisition and treatment of protected wetland habitat and to purchase conservation easements for the National Wildlife Refuge System. Since President Franklin D. Roosevelt signed the Migratory Bird Hunting Stamp Act in 1934, sales of the winsome duck stamps have raised more than $1 billion to help clean water, aid in flood control, reduce soil erosion, and create outdoor recreation opportunities, according to the U.S. Fish and Wildlife Service (USFWS).

Stamp collectors and art lovers can appreciate the detail and beauty of the birds portrayed on the stamp. Since 1949, American artists have submitted drawings or paintings for the pride of landing the image. It is the only juried art competition sponsored by the federal government.

The North Carolina Wildlife Resources Commission started a similar fundraising stamp and print program in 1983. The proceeds support waterfowl research and wetlands management. The NCWRC, founded in 1947 to help conserve the state’s fish and wildlife, is the regulatory agency that enforces fishing, hunting, trapping and boating laws.

To involve youth in bird habitat conservation, USFWS initiated the Junior Duck Stamp Conservation and Design Program in 1989. The year-round, K-12 curriculum allows students to explore waterfowl habitat characteristics and conservation principles through science, art, math and technology-focused activities. Students are then encouraged to enter the Junior Duck Stamp contest. The winning artwork is available to collectors on a $5 stamp.