BY Back to Boston 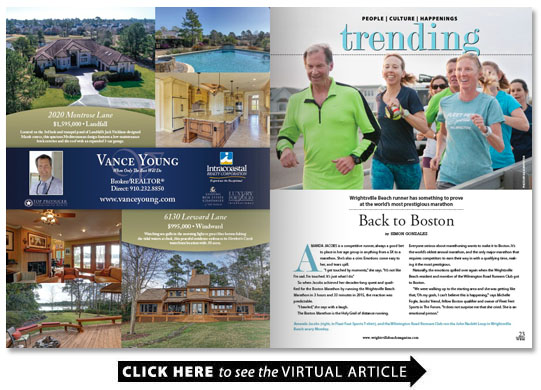 Amanda Jacobs is a competitive runner always a good bet to place in her age group in anything from a 5K to a marathon. She’s also a crier. Emotions come easy to her and tears spill.

So when Jacobs achieved her decades-long quest and qualified for the Boston Marathon by running the Wrightsville Beach Marathonin 3 hours and 33 minutes in 2015 the reaction was predictable.

“I bawled ” she says with a laugh.

The Boston Marathon is the Holy Grail of distance running. Everyone serious about marathoning wants to make it to Boston. It’s the world’s oldest annual marathon and the only major marathon that requires competitors to earn their way in with a qualifying time making it the most prestigious.

Naturally the emotions spilled over again when the Wrightsville Beach resident and member of the Wilmington Road Runners Club got to Boston.

“We were walking up to the starting area and she was getting like that ‘Oh my gosh I can’t believe this is happening ‘” says Michelle Fogle Jacobs’ friend fellow Boston qualifier and owner of Fleet Feet Sports in The Forum. “It does not surprise me that she cried. She is an emotional person.”

As Jacobs crossed the finish line she felt other emotions: Frustration. Disappointment. Perhaps a touch of regret.

She didn’t run the race she envisioned. She went out too fast pushing the pace to stay with her friend and fellow Road Runners Club member Keira Sciance. She covered extra ground weaving in and out of runners.

“I should have just run my own race ” she says. “I knew I was running too fast. I was already tired at mile seven.”

Boston was supposed to be a one-and-done. As fulfilling and emotional as it was to qualify and to run the plan was to cross the finish line and cross it off the bucket list. But after the initial disappointment another feeling elbowed the other emotions to the side: determination.

“I thought I would like to do it once and be done ” she says. “But I need a redo of last year. Then I’ll get it out of my system.”

This year’s marathon scheduled for April 17 — it’s always held on Patriots’ Day in Boston the third Monday in April — will be Jacobs’ second. But when she considers where she came from it won’t be any less special than the first.

Jacobs began running competitively when she was 6. She was fast — fast enough to earn a track scholarship to Slippery Rock University in Pennsylvania after high school. Then in a second everything changed.

“It was during one of my training runs in the summer going into my sophomore year ” she says. “Our coach gave us a training plan to follow during the summer. I went on one of those training runs and got hit by a car. It put me out of commission for two years.”

She completed her undergraduate at Slippery Rock earned a master’s degree at George Mason in Washington D.C. and a doctorate in education at the University of Rochester in New York. She was teaching in D.C. when she met her now husband Dave.

Jacobs had resumed running after recovering from her injuries. She ran marathons in Philadelphia Pittsburgh and Washington D.C. Boston was in the back of her mind but she wasn’t fast enough to qualify.

“Back then I wasn’t training smartly ” she says. “I went out way too fast. All of those marathons were really stupid. Looking back I think ‘How did I finish them?'”

She gave up on marathoning for a while. She hadn’t entered one in years when she and Dave moved from upstate New York to Wrightsville Beach three years ago.

“We both surf and we wanted to be on the coast ” she says. “We always traveled to the coast so we thought why not live there?”

Dave opened a law practice. Together they founded Sea Love Sea Salt Co. harvesting salt from the water steps away from their townhouse on Oceanic Street. And Amanda began to look for running buddies.

She would see a big group regularly running the John Nesbitt Loop together. She learned it was the Wilmington Road Runners Club which runs the loop every Monday evening.

“Joining the running club pushed me to do another marathon ” she says. “I hadn’t done one in 10 years. But in the club that’s what you do. As soon as you join it’s like ‘What marathon are you doing?’ I was like ‘I’m not. I’m not training for anything.’ That’s not an accepted answer.”

She began to dream of Boston again about halfway through her training cycle for the Wrightsville Beach Marathon. There was just one catch: She’d have to change her routine.

“We were talking one day and she said ‘I think I want to qualify for Boston ‘” Fogle says. “I said ‘OK if you want to qualify for Boston I’m going to give you some harsh reality.’ Amanda is very competitive once the gun goes off but in training she’s like ‘Let’s just go for a run.’ She was running with all of our friends who are not fast enough really. They just aren’t at that level. I said ‘You’ve got to stop running all the time with our friends. They are just not pushing you and you need to get pushed.'”

It wasn’t an easy decision.

“They were my friends ” Jacobs says. “I liked training with them because we talked the whole time and it was great. I had to leave my crew that I’d been with five days a week. It was kind of like a breakup.”

It worked out. She’s still friends with the old group. She gained new friends. And she qualified for Boston.

Now she’s headed back again. She’s confident of a better time. She’s done more miles than ever in part because she ran the grueling 40-mile Uwharrie Mountain Run in February to celebrate turning 40.

She might cry again at the starting line but she intends to feel better at the finish line this time.