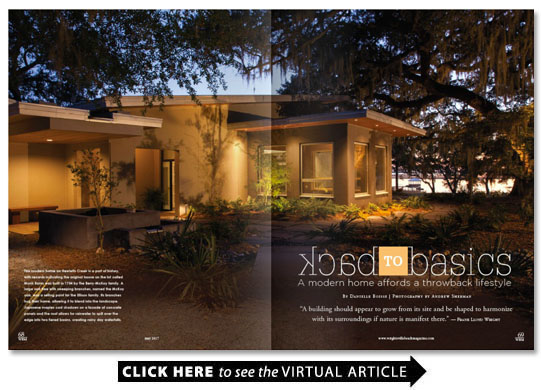 “A building should appear to grow from its site and be shaped to harmonize with its surroundings if nature is manifest there.”– Frank Lloyd Wright

In between deep-rooted oaks and underneath the widespread branches rests a house morphed into its surrounding landscape. A long driveway extends from an unpaved road revealing a seven-acre lot with a chicken coop garden beds and a camouflaged modern home facing the mouth of Hewletts Creek.

“This house was forward thinking and at the same time it is back to basics ” homeowner Jane Ellison says. “It gives us what we need. It is functional efficient and environmentally responsible. It is also peaceful. Nature is everywhere — inside and out.”

Lucien Ellison founder of Ellison Building Company built the house to be a forever home for him Jane and their three sons — Jack (12) Archie (10) and Baines (8).

The architectural design combines modern ideals and the intrinsic need to be connected to the outdoors. The house was positioned in a way that creates harmony with the natural setting. Windows were aligned to maximize views and enhance natural daylight and solar gain. The interior exposes the simple use of materials — concrete floors and natural cypress ceilings. The bedrooms are not large but efficient while the outdoor spaces are equally important as the indoor spaces.

The family found the bucolic lot off Quail Run Road in 2011.

“The land is beautiful peaceful and serene ” Lucien says. “It feels like it is in the middle of nowhere or in the country. I didn’t know a place like this existed in Wilmington.”

The original house was knocked down and Lucien Ellison began working with architect Kevin Pfirman to construct the first passive home in southeastern North Carolina.

A home has to meet rigorous efficiency standards to earn classification as passive. Such houses are about 70 percent more energy efficient than average.

The standards include use of 6 000-psi concrete walls and triple-paned thermal-insulated windows and doors along with plenty of insulation to keep the house airtight and prevent energy leaks; an energy recovery ventilation system that constantly flushes old air and ushers fresh air in; and solar orientation that captures enough sunlight in the winter to heat the house while eliminating sunlight in the summer to keep it cool.

“Jane and I both decided that we wanted to build the most sustainable house that we could on the property. The house is practically net zero ” says Lucien who underwent weeks of training to earn his Certified Passive House Consultant designation from the Passive House Institute U.S.

lucien and Pfirman worked as a team to meet the passive home standards. Pfirman created a dynamic roofline without gutters that would allow the Ellisons to one day live off the grid and collect rainwater.

“We created these two rooflines with opposing pitches that would channel the water into two basins ” Pfirman says. “They would eventually become a water feature at the front and rear entry of the house. The water comes down into those basins then they fill up overflow and run through the rocky stream bed that we designed.”

Pfirman also was intentional with the lines he created on the interior of the split-level home. Circulation spaces were aligned with views of tree branches and Hewletts Creek.

“I am not a fan of walking through spaces to get to other spaces. I am not a fan of the indoors ” he says. “Even when you are deep in the house you can still see far away through a window. It lets you know that there is something beyond.”

The design is exactly what the Ellisons wanted.

“No matter where I look I see what I want to see — the way the sun hits the water ” Jane says.

A dynamic and open family space consists of two living areas and an informal dining area floating in front of a large and efficient kitchen. A large kitchen island — also known as Jane’s second office — has drawers organized in chronological order of the boys’ schedules. There’s a drawer for packing lunches and another for their after-school snacks.

“This is where they eat breakfast have after-school snacks and do homework every day ” she says. “I am always right here with them.”

A light shelf follows the perimeter of the living spaces emitting a soft glow that projects up toward the natural cypress ceiling. Clerestory windows allow sunlight to peek through the tree branches. A metal girder truss runs across the ceiling exposing the authentic structure and providing function with two chandeliers suspended over the dining table.

“There are paper airplanes and wine corks on top of the truss and the light shelf. We are trying to see how many we can get up there ” Jane says.

Pops of color show through the artwork that was all created by family friends and local artists. A floating cabinet for books hugs the far wall of the living area on the left side and has a TV for the guys. The right side has a more feminine sitting area with a purple sofa and a second generation Ellison piano.

“Everything has a history and is beginning to have a story ” Jane says. “The house has so many layers between the personal artwork and the boys growing into the house. It keeps evolving and becoming more and more us.”

With three busy sons who all play several sports on travel teams Jane designed a room for adult time. She and Lucien enjoy sitting in two Barcelona chairs talking reading or meditating.

“I love the special place we’ve created and no matter where we travel I am always so excited to return and reconnect to our home base ” she says. “It’s a peaceful meditative home that recharges me daily amongst the chaos that comes with our five busy family members.”

the Ellison family loves to entertain in the 5 500-square-foot home. Each boy has his own bedroom with an extra bed for a friend.

“The house feels the happiest when it is full with friends and family ” Jane says. “We have a lot of sleepovers.”

The Ellisons created a yard that would offer outdoor living year-round in addition to a sustainable lifestyle. The boys have a putting green and sport court. Herb boxes and kiwi seedlings align the tiered landscape leading up to a concrete pad used for entertaining.

A porch off the living space is where the Ellisons have dinner most nights followed by a fire in a pit constructed with bricks off the original home. In the front there are also several garden beds and the chicken coop.

“The boys just eat right off the vine ” Jane says.

The outdoor spaces have been used for birthday parties exercise holiday oyster roasts and a family wedding.

“We use every bit of the house and we prefer to be outdoors ” Lucien says.

The three Ellison boys have plenty of room to run and play.

“This is going to be what they remember ” Jane says. “They are creating lots of great memories here.”

The home is modern yet the lifestyle is a throwback — collecting chicken eggs and eating raw vegetables from the garden. Jane and Lucien brought their family back to basics and agree the outdoors is where they belong.