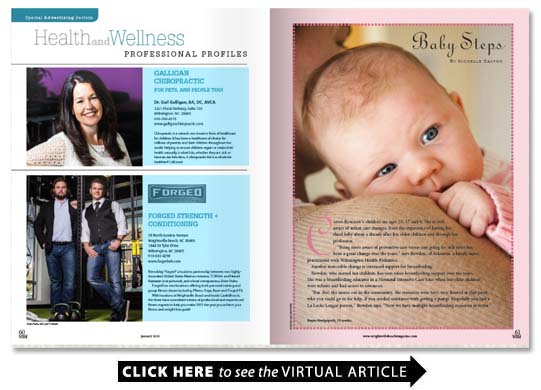 Caryn Bowdens children are ages 20 17 and 8. She is well aware of infant care changes from the experience of having her third baby about a decade after her older children and through her profession.

Being more aware of preventive care versus just going for sick visits has been a great change over the years says Bowden of Atkinson a family nurse practitioner with Wilmington Health Pediatrics.

Another noticeable change is increased support for breastfeeding.

Bowden who nursed her children has seen more breastfeeding support over the years. She was a breastfeeding educator in a Neonatal Intensive Care Unit when her older children were infants and had access to resources.

But (for) the moms out in the community the resources were very very limited at that point who you could go to for help if you needed assistance with getting a pump. Hopefully you had a La Leche League person Bowden says. Now we have multiple breastfeeding resources in town.

People are breastfeeding more and theyre breastfeeding longer says Dr. Pamela Taylor of Wrightsville Beach. Thats probably one of the biggest things that has changed in the first year of life.

Close to 80 percent of mothers in the US are breastfeeding their babies after giving birth following a slump in the 1970s Taylor says.

It just wasnt in vogue or supported in society or in the medical field even as much as it is now says Taylor of Wilmington Health Pediatrics. Now theres a huge movement for all of the benefits of breastfeeding in the first year of life.

New Hanover Regional Medical Center announced in 2014 its Betty H. Cameron Womens & Childrens Hospital was nationally certified as a baby-friendly facility through an initiative by the World Health Organization and the United Nations Childrens Fund.

Recent changes focused on infants rooming in with their moms throughout their hospital stay maintaining skin-to-skin contact between parents and babies and breastfeeding within one hour of birth the hospital notes.

Nationally in 2010 nearly 50 percent of mothers were still breastfeeding at six months and 27 percent were at one year. These numbers are up from the year 2000 when 35 percent of mothers were breastfeeding at six months and 16 percent at one year Taylor says citing statistics from the US Centers for Disease Control and Prevention.

Some local pediatric offices have lactation consultants and specialists.

Twenty years ago there were not lactation specialists offered in-house by the pediatricians says Celeste Rodriguez lactation specialist at Wilmington Health Pediatrics. Now it is beginning to be more common. The culture is shifting toward recognizing that breastfeeding is natural and the normal way to feed a baby.

Short-term benefits may include providing passive immunity to babies from mothers Rodriguez says while benefits down the road could include decreased rates of asthma and obesity.

For parents who bottle-feed their babies formula choices have increased over the years.

It is amazing what has developed in the formula industry Bowden says. They run the gamut.

Formula makers have added the fatty acids DHA and ARA and have designed selections to help with allergies sensitive stomachs and digestive problems and to provide extra nutrition such as for premature babies Bowden says adding there are generic brands too.

While Bowden helps mothers breastfeed she also understands it does not always work for parents.

You do whats best for your lifestyle and your family Bowden says.

More vaccinations have been added to the recommended schedule for babies. Some insurance plans now cover vaccinations every year after completing childhood vaccines instead of every other year Bowden says.

In medicine we believe these preventive visits are so important to make sure that not only are you getting your vaccines but youre growing like you should Bowden says.

Immunizations added to babies checkups over the last 20 years include vaccinations for chickenpox (varicella) rotavirus and hepatitis A as well as the Hib vaccine to protect against Haemophilus influenzae (H flu) and the Prevnar vaccine to help protect against pneumococcal disease.

Dr. Edgar Horger of Seaside Pediatrics has been in practice 22 years and says more childhood vaccines have been added to the normal regimen during that time.

There are certainly more vaccines available now than there were when I first got out of my residency Horger says. Its made a big impact in terms of the health of babies not only in the first year but after that.

Horger recalls during his residency physicians saw quite a few kids with H flu which can cause meningitis and septic arthritis. But soon after the vaccine came out H flu basically disappeared he says.

A lot of physicians coming out of training now they wouldnt know chickenpox if it hit them on the side of the head because theyve just never seen a case of chickenpox Horger adds comparing that to his own experience of never having seen measles or diphtheria cases due to those earlier vaccinations.

Pediatric examinations have stayed fairly consistent over the years.

We are not a high-tech field; we dont rely on advances in surgical techniques and robotics Horger says. The act of actually examining a child probably hasnt changed since they have had a field of pediatrics. Its still a hands-on field of medicine.

But developmental screenings have been added to well checkups starting at six months to help with early detection of delays. Screenings include the Parents Evaluation of Developmental Status which parents fill out.

Bowden does not recall such screenings when her older children were babies beyond those for walking and talking.

When you look at kids who may have developmental delays the biggest thing that benefits them is therapy whether it is speech therapy for a language delay if its occupational or physical therapy for motor delay Bowden says. But the sooner you recognize that and the sooner you intervene the better the outcomes.

Pediatricians also conduct autism screenings at about 18 months and 24 months.

One of the big areas of change has been screening for autism for children primarily because of the increasing incidence of autism throughout the United States over the last 15 years Horger says.

CDC estimates show about one in 68 children may have autism spectrum disorder higher than previous measures.

Horger attributes the rise in part to a greater awareness of what autism is and the way autism is classified with a spectrum of disorders.

Certainly for some reason there seems to be an increase in the actual incidence Horger says. Nobody has a good idea why.

But vaccines are not to blame he and other health experts say. And while the CDC and Food and Drug Administration have said there is no evidence the mercury-containing preservative thimerosal in childhood vaccines caused harm other than redness or swelling it was removed from vaccines in the US about 15 years ago except for some versions of the flu vaccine.

I still get questions fairly regularly about what do I think about the thimerosal or the preservative in vaccines Horger says. And my answer is its not there anymore.

Vaccines dont cause autism Taylor says adding studies including one at the UNC School of Medicine in Chapel Hill have indicated possible genetic links.

When it comes to autism worries Bowden says routine checkups will help.

Were going to notice if theyre not meeting those milestones Bowden says. And the sooner we find those things the sooner we can intervene.

Primary developmental milestones for babies have stayed consistent over the years Horger says.

Well Checkups At A Glance

What were able to provide children during that time period is critical says Jane Morrow executive director of Smart Start New Hanover County.

The more parents respond to their babies talk to them and hold them the better says Hengameh Kermani associate professor of early childhood education at University of North Carolina Wilmingtons Watson College of Education.

Kermani encourages parents to surround babies with sounds including music and spoken conversation and to read books with colorful pictures and high-contrast patterns.

Parents should read to babies as much as they can Kermani says.

Here are some milestones babies may reach by their well checkups during the first year. Health and education experts note children develop at different rates and to keep that in mind when reading such guides.

Pediatricians check that babies have gotten the hang of feedings and parents are adjusting.

Babies are becoming more interactive and turning toward sounds. They have some improved head control and may be starting to smile and coo. They show excitement by waving their arms and legs. Babies may be learning that crying leads to feedings and diaper changes. Vaccinations generally start now.

Babies are more playful smiling reactively copying parents facial expressions and starting to make more baby noises and laugh. When they are on their tummies they can pick up their heads better. Babies may be starting to roll (often from tummies to backs first) so parents are cautioned to be more vigilant with babies on the changing table. Babies may reach for things with help and recognize familiar faces.

Pediatricians recommend babies can start solid foods at this time first with rice or oatmeal cereal for infants and then first stage vegetables and fruits. Babies are rolling both ways generally and are more playful. They can respond to their names and are becoming more vocal. They may be starting to sit up with a little help. Babies can receive the flu vaccination after six months.

Babies are starting to understand who Mom and Dad are versus a stranger. They are making more sounds playing Peek-a-Boo and raking their hands to scoop up objects. They may be crawling and sitting up on their own. They may pick up toys wave goodbye or lift their arms to be picked up.

Babies are much more consistent with saying mama and dada. They may be playing Pat-a-Cake and may be shy with strangers. They may be cruising around while holding on to the edge of furniture and walking or starting to take their first steps. Babies fine motor skills are better and they can make a pincher grasp with their thumb and index finger. They enjoy dropping objects and watching adults pick them up. They may display affection with hugs and kisses and show a preference for favorite toys. They can respond to no (perhaps temporarily as the mind is a curious one). Pediatricians may recommend bottle-fed babies switch to sippy cups at this time to help promote good dental hygiene.

Words are starting to come together more at 15 months and babies are generally walking. Parents may notice a flood of words between 18 months and two years as language takes off. Reading and talking to your child during that first year will help them prepare.

For more information on developmental milestones visit the CDCs website at www.cdc.gov/ncbddd/actearly/milestones/index.html