A church fellowship hall is transformed into a stunning office building 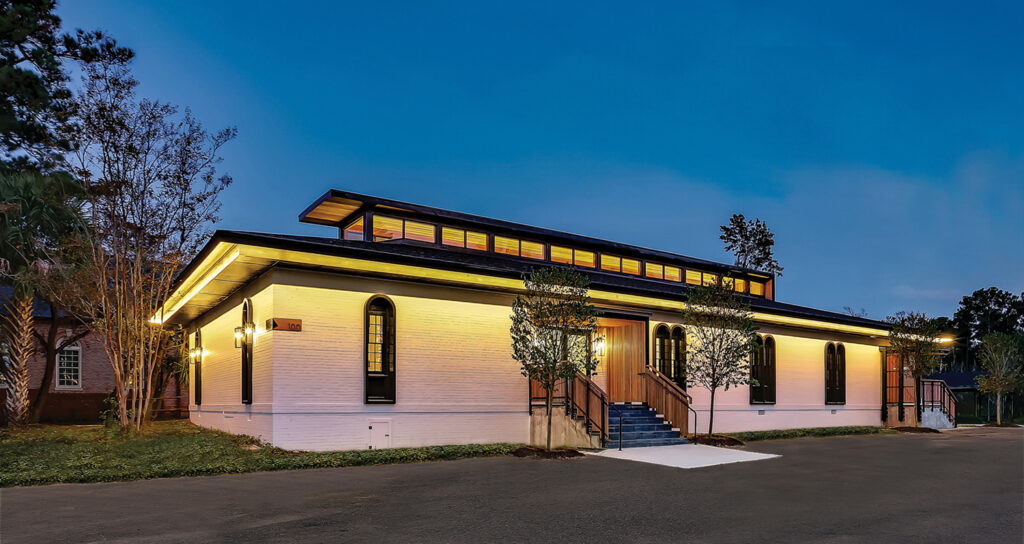 The original 4,000 square foot fellowship hall of the historic Pearsall Memorial Presbyterian Church on Market Street was designed by Leslie Boney, Jr. of Boney Architects and dates to the early 1970s. Its concrete precast arched windows reflect mid-century style. A key architectural change to the building during renovation was the addition of a clerestory along the ridgeline designed by Mark Wilson of Kersting Architecture to bring in natural light. Photo by Crystal Glass Photography

The red brick Pearsall Memorial Presbyterian Church on the south side of Market Street flourished when Rev. Dr. B. Frank Hall was the pastor from 1949-1977. Hall was a theologian known for his eloquence in the pulpit and in his local newspaper articles.

He had deep Wilmington and Wrightsville Beach roots, the family maintaining a cottage on East Oxford Street and a home on Chestnut Street until after his death and that of his wife, Adelaide.

Dr. Hall was also the head of the philosophy and religion department at then Wilmington College, now University of North Carolina Wilmington. He was a charismatic orator who was friends with President Harry Truman.

As Hall neared retirement, the church added a 4,000 square-foot fellowship hall for youth programs and church gatherings. It was built in the early 1970s and designed by Leslie Boney, Jr. of Boney Architects.

The last service was held in June of 2019 and the church and property was put up for sale in 2020. Enter PBC Design + Build, which is celebrating 25 years in business under founder Dave Spetrino, who got his start with a seven-figure renovation of the 12,000-square-foot Graystone Inn.

The company purchased the property with multistage plans to redevelop it into its headquarters.

The fellowship hall, red brick to match the church, with a more modern mid-century look reflected in concrete precast arched windows, was repurposed as an industrial-modern office space bursting with functionality for the busy PBC team.

“I was pleased with PBC Design + Build’s ability to preserve the original structural integrity of the building while creatively adapting the space to suit the current needs of their company,” says Travis Gilbert, Historic Wilmington Foundation executive director.

PBC discovered all kinds of hidden gems during the renovation.

“That was the biggest piece of it all, uncovering what was already there,” says PBC president Kyle Henry, who oversaw the project. “We found if we removed the paint off the concrete blocks, we could have an exposed concrete block wall. On the floor there were vinyl tiles down, but when we took that up we found a concrete floor, so we reused that and then the stage worked out great for our design studio.”

Steel beam trusses hidden underneath an acoustic drop ceiling had Spetrino at hello.

“I stood on that window sill and climbed up so I could push open the ceiling and when I saw the steel beams and the pine roof planks, I said, ‘I think we can really do something cool here,’” Spetrino says.

The transformation was a collaborative effort by architect Mark Wilson of Kersting Architecture, PBC Design + Build’s in-house interior designer Kelsey Talis, Henry and Spetrino. It is phase one of a larger development plan that will include turning the former church sanctuary into a 200-seat restaurant and adding new homes to the surrounding property.

“The renovation of the fellowship hall is just the start of several phases of growth. Altering the exterior color scheme, the addition of the clerestory, and the awninged entrances were key design components meant to establish our company’s presence in the area, conscious decisions to pique interest and get the community excited about what is to come,” says Talis.

The clear star of the show is the clerestory, a raised section of roof running down the center of the structure with windows. The pop-up addition to the building along the ridgeline provides a modern aesthetic to the exterior and purpose to the interior.

“I really like the clerestory. You don’t really notice it from the inside until you realize that’s where all the natural light is coming from,” Henry says.

The clerestory was designed by Wilson.

“This bold architectural move helped flood the interior of the space with light, which was further spread by having open ceilings in the core common areas and transom windows in the perimeter private spaces,” says Wilson.

“That paint job happened over a weekend. I remember driving by Monday morning and just thinking, ‘Wow that just made all the difference in the world,’” says Henry.

In the foyer, guests are greeted with a custom steel-cut PBC sign by Area 51 Metal Fabrication that’s backlit. Front door handles also have the company logo.

Inside, the space is as much a showroom as it is offices, an elegant display of what can be done to a 1970s church fellowship hall. A stage once used for Christmas pageants and choir practice is now a design studio. Heavy curtains that once surrounded the stage were replaced with glass, and eight-foot ceilings were opened into a dynamic vaulted ceiling of steel beams and original wood.

“Knowing that the intended design style was industrial-modern, the building had good bones and potential,” says Talis.

The conference room is encased in glass by Matkins Glass of Wilmington. The conference table is made of a magnolia tree that fell on the property during Hurricane Florence, repurposed by Old Growth Riverwood. A concrete strip by Bluewater Surfaces runs down its spine for support, and it sits atop railroad tracks salvaged from a job site by Henry and Talis. The fabrication of the legs is by Area 51.

“Getting the different pieces of that table into the space and assembling it was a very difficult and nerve-racking experience, but the number of compliments we receive and conversations it generates makes it worth it,” says Talis.

Each of the eight offices has a built-in desk suspended from the wall. A bullpen office space is for field managers. A private phone booth provides a great spot for quick calls.

Functionality continues in the break room with modern placements for the coffee maker and microwave, and a roll-out table.

“When someone drops off a pizza, put it here. When the pizza is done, roll it back in. It’s probably my most favorite thing here,” says Spetrino.

The three bathrooms showcase a variety of ways to place tile or position fixtures.

“I wanted each one to have different design elements; lighting played a key role,” says Talis.

A glass garage door in the rear is specially fitted for deliveries, and metal patchwork quilt barn doors by Area 51 are used to close off storage.