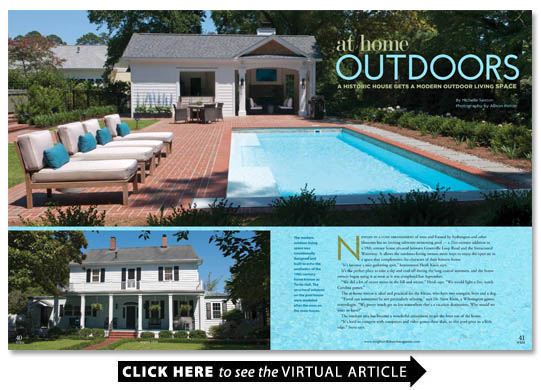 Nestled in a lush arrangement of trees and framed by hydrangeas and other blossoms lies an inviting saltwater swimming pool — a 21st-century addition to a 19th century house situated between Greenville Loop Road and the Intracoastal Waterway. It allows the outdoors-loving owners more ways to enjoy the open air in a space that complements the character of their historic home.

It’s the perfect place to take a dip and cool off during the long coastal summers and the homeowners began using it as soon as it was completed last September.

“We did a lot of oyster roasts in the fall and winter ” Heidi says. “We would light a fire watch Carolina games.”

The at-home retreat is ideal and practical for the Kleins who have two energetic boys and a dog.

“Travel can sometimes be not particularly relaxing ” says Dr. Steve Klein a Wilmington gastroenterologist. “We pretty much get to live somewhere that’s a vacation destination. Why would we want to leave?”

The outdoor area has become a wonderful enticement to get the boys out of the house.

“It’s hard to compete with computers and video games these days so this pool gives us a little edge ” Steve says.

Additional work to the Kleins’ Wilmington home which began in early 2015 and was completed around Labor Day includes a pool house/cabana with a nearly full-sized kitchen a half bathroom a wood-burning fireplace and an outdoor shower.

“It looks like a resort out there ” says builder Don Fennell owner of Biltmore Building Company.

The Kleins took care to ensure the modern touches meshed ideally with the historic house property and outbuilding. The two-story plantation revival house is known as Turtle Hall and it is one of the oldest in the city. It originally was built as early as 1812 as documented in neighborhood research.

“We were really cautious coming into the design aspect of it really cautious because we wanted to maintain the look of the house ” Heidi says. “We wanted something modern in context but needed the look to tie into a very old house.”

The unusual name has its origins prior to the Revolutionary War. North Carolina one of the original 13 colonies granted two estates on 640 acres extending from Shandy Point to Deep Inlet (Hewletts Creek) to John Watson in 1735. Dr. John Eustace a friend of British writer Laurence Sterne lived on one estate. Sterne authored the novel “Tristram Shandy.” In the book Tristram lived on an estate next to his uncle Toby Shandy. Historical documents state that Eustace started referring to the two estates as Shandy Hall and Toby Hall and the names stuck.

Eustace’s original house burned sometime in the early 1800s and was rebuilt in 1812. In 1920 two German fishermen who fished and harvested turtles used Toby Hall as a working farm. The property was deemed Turtle Haul and the name later evolved to Turtle Hall.

“You really have to appreciate the time that went into all this ” Heidi says of the trim.

Turtle Hall has undergone several renovations over the years including about 11 years ago when the Kleins moved from Atlanta. Those include work on the house’s Florida room which was rebuilt to maintain the copper roof.

Heidi who works in media strategy and analytics immediately fell in love with the house upon seeing it online and was enchanted viewing it in person.

Moving to Turtle Hall appealed to the couple in different ways. Heidi loves old traditional homes and Steve a surfer enjoys being close to the water.

“We’re really fortunate to have a place with such character and that’s still so convenient with access to Wrightsville Beach Masonboro and Mayfaire ” Steve says.

He admits he initially was not very excited about renovation work the house needed when they moved.

“Thanks to the pool addition it is his dream house too ” Heidi says.

The pool house includes a custom-made barn door which is about 4 feet by 8 feet and built from cypress timber raised from the Cape Fear River says carpenter Dan George. Loggers floated wood down the river centuries ago and some of the densest logs sank and could not be retrieved until more recent years.

“It’s definitely a showpiece ” George says of the barn door which has a unique patina. “A good majority of that wood has been lying down there going on 200 years. It kind of gives a quality to it that can’t be duplicated. You get a ton of color out of it — naturally.”

Structural columns for the pool house were modeled after the main house’s larger columns and the siding matches the simple style of the historic home. The hardware on the addition is iron or stainless.

“Some of it’s a little more modern in aesthetic but we try to keep it all pretty consistent with the main house ” Heidi says.

The kitchen has a sink a dishwasher granite countertops and a refrigerator the family stocks with food for grilling. It also includes a special feature — a double kegerator for “his and hers” North Carolina beer on tap.

The 16-foot by 31-foot San Juan fiberglass pool contains heated saltwater and has an automated chemistry system and a cover — features that allow for longer use throughout the year and low maintenance.

“The kids love the pool; not just my kids but all the neighborhood kids come over ” Heidi says. “The biggest compliment we get is we’ll have friends come visit who haven’t been for a while say ?I can’t believe this hasn’t always been here.'”

Special care was taken with landscaping too as the family relocated plants that were removed during construction so they could still thrive on the property. One large tree was removed in the process but the tree was diseased and would have had to come down anyway.

“Just to bring down the one tree for me was going to be heartbreaking. We had a lot of struggle over it ” Heidi says. “We were really really careful.”

Original and new plants on the property include camellias gardenias wintergreen boxwoods and Nellie Stevens holly. The family can hear sounds of wildlife: birds cicadas and a cacophony of frogs.

Neighbors share their enjoyment of the outdoors she says adding one family built a nature sanctuary in their yard.

“We all spend most of our time outside back here so it’s nice that there are so many amenities from house to house to enjoy ” she says. “Turtle Hall is known for its good neighbors.”

Creating this Home of Distinction

The Kleins and Nikie Barfield Design in Georgia