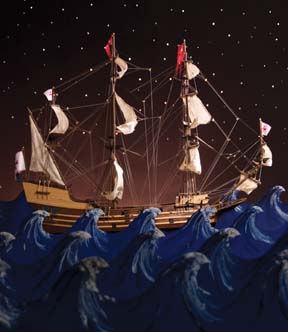 The ancient Egyptians believed that the dead could cross land but water was another story: When it came to making their way across the Nile they needed spirit ships. The living knowing that they’d be on the other side of the veil one day hastened to build seagoing vessels that closely mimicked the real thing. In Egyptian tombs dating to 2000 B.C. archaeologists have discovered accurate scale ship models a testament to the ancient history of this art form. In the 21st century the hobby is still going strong.

Though today’s model boat builders may not have the same motivation for constructing their masterpieces as did their Egyptian predecessors they pay equal attention to detail. It comes as no surprise that Wilmington and Wrightsville Beach surrounded by the Atlantic Ocean Cape Fear River and Intracoastal Waterway are home to model boat builders and aficionados alike.

Wilmington’s own Dale Rusmisell has been building model boats for 40 years. One of his boats a model of the Santa Maria is on display at Gregory Elementary School. “Back in the day plastic models and that type of thing were big ” he says. “It took a lot of time to build them but not a lot of time to destroy them. We’d have naval battles — build firecrackers into the hulls put lighter fluid on them and watch them explode when the firecrackers got lit. They’d blow up like what you’d see in a movie.”

Rusmisell started out by using kits to build his model ships. Now he does what he calls “kit-bashing.” “I use elements from kits but not the whole thing ” he says. “I’ll do research add things make it more realistic.”

Twenty-five years ago Rusmisell built his first boat from scratch — the CSS Neuse. He’s been hooked ever since. His advice for people just starting out: “Start with the kit. You can buy them online; there are several companies that sell them.” He adds “The key thing about kits one of the misconceptions is that they’re not like the old plastic models. The kits just supply you with raw materials … metal decorative pieces. That’s all you get … little strips of wood.”

Rusmisell suggests that newbies shouldn’t get into scratch-built models “until you’ve built 10-15 boats on the low end. You can look in the National Archives for plans if it’s a U.S. boat or in the World Naval Museum in England if it’s British.”

One of his scratch-built masterpieces is the HMS Victory which took more than a year and 2 800 hours to build. “I just loved the Victory ” Rusmisell says. “It’s the signature boat for England.” The ship played a pivotal role in the Battle of Trafalgar and forever changed the way that naval battles would be fought. Its infamy has led the Victory to be mass reproduced but Rusmisell cautions caveat emptor.

“You can set up machines and produce 2- to-3-foot Victories for a couple of hundred bucks. They’re not historically accurate not what I’d consider hand-built; they basically just slap the stuff on there. When you put them side by side there’s no comparison ” he says.

Rusmisell cradles one of his handcrafted ships a pilot boat in both hands. “My stuff works ” he says demonstrating. “The rudders work the hatches work.” Gently he opens a tiny hatch to reveal miniature stairs and tied bundles. He opens another; below deck tiny barrels and more bundles are tucked away.

Enter the next room and the extent of Rusmisell’s passion for all things nautical becomes clear. This is a room with a theme: lighthouse pillows a beach-and-lighthouse mural collectible lighthouses and a rug depicting a lighthouse. The curtains are sewn from unbleached muslin. In the place of honor showcased in a lighted case is Rusmisell’s to-scale replica of the British HMS Endeavor.

“Captain Cook used this boat ” he explains. “It has a lot of history.” Rusmisell sewed the ship’s sails himself from unbleached muslin purchased from the fabric store. “I use FrayCheck which is meant for sewing. It’s perfect for doing rigging when you tie things off.”

Over time Rusmisell has amassed quite a bag of tricks. “I have a vast amount of tools. The more you build the more you come up with your own little things to use ” he says. “I use lots of little hand tools like X-acto knives pliers tweezers clothespins for clamps and rubber bands. The dollar stores have emery boards — they’re not precision tools but to me they’re like sandpaper in different lengths. The other day I went to a beauty supply place and got those little clips you use for curlers. They’re perfect for rigging.”

He is quick to reassure beginners that tools can be found in common places — and they don’t have to break the bank. “You don’t have to go to a hobby store or specialty place to get the things you need. Basic little stuff reasonably cheap is all you need to get started.”

In Rusmisell’s backyard workshop there’s wood of all shapes and sizes vellum plans spread out on tables and boats in various stages of construction. Taped to the wall are the plans for his latest project: the Hermione the Marquis de Lafayette’s personal ship. “This is what they say it should look like ” he says taking the plans down and spreading them out “but my ship will be a little different. In the first place the cannons were not made from brass they were cast so they were always black and the gun carriages were red. These boats very few of them were natural wood.”

This is not a hobby for those who lack patience. “Some things will aggravate the pure mess out of you ” Rusmisell says. “You’re working on such a small scale. If you’re doing a regular-size boat you could be off a 32nd of an inch and be fine. That’s not the case with these.”

Fellow Wilmington boat-builder Frank Mayes would agree. A retired minister turned miniature-shrimp-trawler specialist Mayes is originally from Beaufort South Carolina. “When we went into town we’d use a rowboat ” he says. “We’d tie up to the shrimp boats when we got across the creek. I’ve climbed across 100 of them.”

Though Mayes later moved to Charlotte the image of those shrimp trawlers stayed with him. Today he focuses on building scale models of 56-foot Carolina shrimp boats. “They’re 41 inches long made out of cypress ” he says. “It takes about three months of solid work to build one about 250 hours.”

Unlike Rusmisell Mayes only builds one kind of boat — and he doesn’t use plans. Instead he utilizes the prototype of the Carolina shrimp boat as a model and then crafts each model ship from his imagination. All of his boats’ components except the pulleys propeller and life preserver are built from scratch. The red stains on the boats’ hulls overlaying steel plates are real rust: “I use a can of rust and a hypodermic needle ” Mayes says. The ships’ nets originally hail from Piggly Wiggly; they’re fruit bags covered in spray paint. The end result is an authentic to-scale model of a Carolina shrimper.

Aardema himself is a sailor and power boater. “I grew up building model airplanes and boats ” he says. His professional collection got its start when he was traveling: “I ran across an older gentleman who had been building ship models his whole life. He wanted to sell the entire collection — 33 of them. He quoted me a reasonable price so I said I’d buy them sight unseen and drove to Birmingham Alabama where he lived.” Though Aardema wasn’t as thrilled with his purchase as he’d hoped he took the boats home gave them a much-needed touch-up and the rest as they say is history.

“I get boats from a lot of different sources ” Aardema says looking around his well-stocked storefront. “Some I have built by professional builders from scratch. A lot of them are models built from kits. I get some locally some from antique shows and some from flea markets. A few are models that people bring in on consignment.” According to Aardema many of the best builders are located in the Dominican Republic.

The boats at Harbor Island are all accurate and professionally built except for the folk-art models. “America’s Cup boats are quite popular as are pond models — actual floating models that people raced. They’re hard to find and expensive ” says Aardema.

One of the shop’s showpieces is a kit-built French boat Le Soleil Royale. “The kit itself cost $1 700. It took the builder over a year; it’s extremely detailed ” Aardema says. The boat which has 104 brass guns occupies pride of place at Harbor Island and it looks like it will be staying there for the foreseeable future. “There’s no way to transport the boat without destroying it. It would be hard to have in a home with kids or pets.” If your pockets are not quite that deep take heart; most of the model boats are far less expensive and a few can be had for under $1 000.

There are also serious collectors’ items here; Dale Rusmisell’s HMS Victory is priced at $11 500. Historical accuracy and handcrafting don’t come cheaply when you consider the countless hours invested and the cost of materials. “One time I did the math; I think it amounted to $2.40 an hour on the Victory. It’s definitely a labor of love ” says Rusmisell.