BY Jamie Walker and Marimar McNaughton 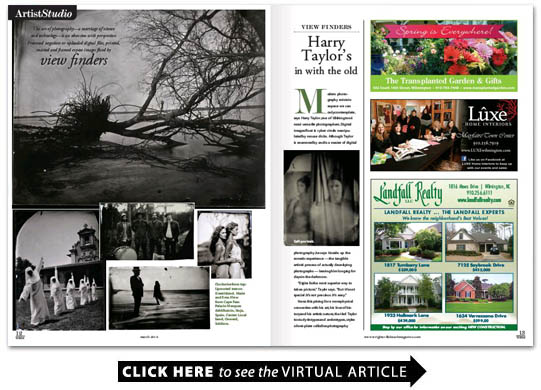 The art of photographya marriage of science and technologyis an obsession with perspective. Processed negatives or uploaded digital files printed matted and framed expose images fixed by view finders.

Harry Taylors in with the old

Modern photography exists in a space we can only contemplate says Harry Taylor one of Wilmingtons most versatile photographers. Digital images float in cyber circles manipulated by mouse clicks. Although Taylor is enamored by and is a master of digital photography he says it soaks up the somatic experience the tangible artistic process of actually developing photographs leaving him longing for days in the darkroom.

“Digital is the most superior way to take a picture ” Taylor says. “But its not special. Its not precious. Its easy.”

It was this pining for a more physical connection with his art his love of history and his artistic nature that led Taylor to study tintypes and ambrotypes styles of wet-plate collodion photography
popular in the 19th and early 20th centuries. These processes have become his first loves.

The look of a tintype or ambrotype photograph has best been described Taylor says as a “half-remembered dream.” And the process so antiquated so surreal in these modern times is almost as dreamy. Taylor lumbers out with his 15- to 20-pound camera encased in a wooden box atop a tripod both of which he built. He sticks his head beneath a drape where he peers at an upside down and backward image. After the developing process the brownish-white image appears ghost-like on a sheet of metal (tintype) or on glass (ambrotype) and stares back at its subjects with a sense of antiquity that sends shivers down spines.

“All Ive ever wanted to do is tell the story in an artistic way ” Taylor says. “I can do that with collodion. Its a documentary tradition thats deeply connected to my soul.”

Taylor has used this process to photo-
graph Civil War re-enactments landscapes and beachscapes sometimes surfers propped against longboards in portraits and even an entire Asheville wedding for another well-known photographer.

It was this and other more modern work that enticed the world-renowned Sianoja-Simposio International De Artistas En Noja exposition in Spain to invite Taylor to attend last summer. Taylors work has appeared in The Paris Review The New York Times Sunday Magazine Garden and Gun Our State and Haven magazines.

The Cape Fear he says is one of the few places hes seen where history and art intertwine with such synchronism. “It feels like youre out there with ghosts sometimes ” Taylor says. Taylor tells their stories through his lens. And in his photographs the ghosts come out to play. Jamie Walker

When in Paris Billy Cone pounds the sidewalks pondering how he might put his touch on its quintessential monuments and landmarks.

“I mean is it just going to be another Eiffel Tower or what?” he asks.

Cones Eiffel Tower is distanced by a foreground of trees.

“Its a little eerie at the same time its unique ” he says. “It loses its scale.”

“In 1983 a girlfriend of mine took me to La Pere Lachaise Cemetery and I never will forget the statues I saw there. I said to myself at that moment that I was going to come back and photograph this in black and white one day. In 2002 that project began and became a reality ” Cone says.

“Its phenomenal the textures. Theyre all weathered. Thats the whole idea. To me the weathering the aging of the statuary gave it its character. Artists did part of it then nature came and put its touch on it. I just love that effect.”

He also intentionally blurs some images.

“Have you seen an artist at work sometimes how theyll close their eyes and squint just a little bit? What theyre looking for is the light and the color and the change in those two things ” he explains.

By blurring his images Cone softens the ugly side of metropolitan life. The results often appear to be 100 years old. Traveling with one serious camera a Canon EOS 5D Mark II he shoots Fujifilm Neopan 1600 turning it over to well-known French photographer Franois-Olivier Gouillart for processing sometimes without cropping.

“Its amazing film for contrast and grain I love the grain. It seems that digital is so much more forgiving. With some cameras it seems to find light where the human eye didnt see it ” Cone says.

“The other camera I have is for memories. In Paris you do a ton of walking. Its one of the highlights of being there. Its important I think to have that memories camera with you at all times that you just put into your pocket.”

Cone has a good time wherever he travels whether the wind blows him to Europe or south of the border he admits he has never had a Paris day in Wilmington.

“Im not Billy from North Carolina over there. Im Billy citizen of the world.” Marimar McNaughton

When Wilmington native Steve Brimm was 16 when his parents had a sailboat.

“My dad declared that we were going to go to the Bahamas. I had this little camera; it was actually my mothers 110 underwater camera or it was waterproof anyway and I just couldnt get enough of photographing everything I saw. Thinking back that probably is what planted a seed in my mind about art and photography.”

Until Brimm moved to Colorado in his mid-20s his talent lay dormant. Hed never seen anything like the Colorado landscape and wanted to share the images with family and friends. Later he migrated to Michigans Upper Peninsula on Lake Superior. When not running sled dogs or renting kayaks and mountain bikes his photography evolved during a long fertile period of freelancing for regional magazines and calendars. He now exhibits his work in his own gallery in Copper Harbor.

“I had no idea that I would ever end up a photographer ” Brimm says.

In 2009 Brimm bought Pungo a 1982 26-foot Island Packet for sailing the North Carolina coast. The shoal draft boat draws about two feet three inches with the centerboard up. He also zips around in an inflatable dinghy.

“I wanted to be as close to where I wanted to be and have everything with me With my cameras and computer and everything instead of being in the dinghy an hour or two to get someplace I can work off of the boat.”

By accident Brimm says he stumbled upon a photography community called KAP kite aerial photography. After reading about the technique he built his own remote-controlled unit in summer 2010.

Brimms Panasonic LX5 hangs 75 to 100 feet below the kite pans 360-degree horizontals and 90-degree verticals. With eight gigs of hard drive on board he can upload images to his website his blog and Facebook.

“The main reason I started doing that ” Brimm says “was so I could gain a different perspective on the marshes because they have such neat patterns so intricate and beautiful.” Marimar McNaughton