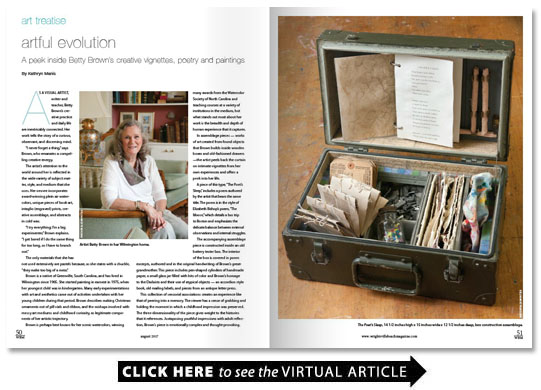 As a visual artist writer and teacher Betty Brown’s creative practice and daily life are inextricably connected. Her work tells the story of a curious observant and discerning mind.

“I never forget a thing ” says Brown who emanates a compelling creative energy.

The artist’s attention to the world around her is reflected in the wide variety of subject matter style and medium that she uses. Her oeuvre incorporates award-winning plein air watercolors unique pieces of book art intaglio (engraved) prints creative assemblage and abstracts in cold wax.

“I try everything; I’m a big experimenter ” Brown explains. “I get bored if I do the same thing for too long so I have to branch out.”

The only materials that she has not used extensively are pastels because as she states with a chuckle “they make too big of a mess.”

Brown is a native of Greenville South Carolina and has lived in Wilmington since 1965. She started painting in earnest in 1975 when her youngest child was in kindergarten. Many early experimentations with art and aesthetics came out of activities undertaken with her young children during that period. Brown describes making Christmas ornaments out of pill vials and ribbon and the mishaps involved with messy art mediums and childhood curiosity as legitimate components of her artistic trajectory.

Brown is perhaps best known for her scenic watercolors winning many awards from the Watercolor Society of North Carolina and teaching courses at a variety of institutions in the medium but what stands out most about her work is the breadth and depth of human experience that it captures.

In assemblage pieces — works of art created from found objects that Brown builds inside wooden boxes and old-fashioned drawers –the artist peels back the curtain on intimate vignettes from her own experiences and offers a peek into her life.

A piece of this type “The Poet’s Sleep ” includes a poem authored by the artist that bears the same title. The poem is in the style of Elizabeth Bishop’s poem “The Moose ” which details a bus trip to Boston and emphasizes the delicate balance between external observations and internal struggles.

The accompanying assemblage piece is constructed inside an old battery tester box. The interior of the box is covered in poem excerpts authored and in the original handwriting of Brown’s greatgrandmother. This piece includes pen-shaped cylinders of handmade paper a small glass jar filled with bits of color and Brown’s homage to the Dadaists and their use of atypical objects — an accordion style book old mailing labels and pieces from an antique letter press.

This collection of sensorial associations creates an experience like that of peering into a memory. The viewer has a sense of grabbing and holding the moment in which a childhood impression was preserved. The three-dimensionality of the piece gives weight to the histories that it references. Juxtaposing youthful impressions with adult reflection Brown’s piece is emotionally complex and thought-provoking.

These pieces also reveal the ways in which poetry and the visual arts blend and intersect throughout Brown’s practice. Many renowned artists both historical and contemporary have expressed their creative impulses in both written and visual languages. Among them are Pablo Picasso Salvador Dali Andy Warhol and Yoko Ono.

Brown describes her multitudinous creative impulses: “I am interested in other forms of the visual arts really in the arts — period.”

She is an accomplished writer who has authored many works of poetry. She is currently working on a memoir titled “Pretty Much ” about her family and her colorful mother.

As a student at the University of North Carolina Wilmington in the 1990s Brown wrote a thesis entitled “Symbiosis: Word and Image” as part of the requirements for her bachelor’s degree in art. She investigated the relationship between these two creative modes. Brown credits this experience with challenging her to think critically about herself and her work as an artist.

However the urge to experiment more freely without expectation or limitation was palpable by the time she completed her degree.

“My middle name is ‘Go.’ I was ready to do my own thing again when it was over instead of just striving to meet expectations ” Brown says. “It was a lot of pressure to think and to do and that was really good for me. I had a usefully analytic approach to the work that I did. But I was ready to put all of that to good use by the time I was done.”

Brown sets up challenges for herself based on the exploitation and manipulation of color in her compositions. This is true whether she is working en plein air or from photographs she takes herself.

In paintings inspired by a trip to Santorini Greece for example Brown allowed color to dictate shape form and depth rather than striving for pure realism. She was inspired to take this approach when she noticed that vestiges of old paint weathering and exposure cause faint bits of color to bleed through the obsessive whitewashing of the building exteriors.

This technique of leading with color is visible in many of Brown’s travel paintings including images from trips to France Italy Portugal and New Mexico. One of these pieces from a trip to France features an expansive downward view of the steeple of a white church. The top of the structure is visible between the eaves of several clay-red roofs; the white building stands out in bright contrast to its earth-tone surroundings.

The background contains a rolling mix of lush blues and greens. Perspective and viewpoint are crucial in this image and yet even these are determined by the scene’s color palette. In this painting and others Brown expertly employs color to grab and maintain the viewer’s attention.

Brown’s recent portrait works also illustrate the significance of her use of color. “Mary Ann” and “Mary’s Girl” are commissioned watercolors rendered simply but carefully.

“Mary Ann” depicts the subject in soft regality wearing the purple associated with royalty in several cultures. The composition frames her face tightly drawing attention to the subject’s eyes also accented with a queenly purple. Her gaze is fixed confidently away from the viewer and her facial expression and body language suggest a strong and capable personality. With royal blues and magnificent purples swirling around her the subject emanates an enviable solidity.

The beauty of the coastal landscape is another defining feature. Recent pieces like “Sound Passage ” a commissioned scene featuring the Heide Trask Drawbridge over the languidly flowing Intracoastal Waterway and “Ann’s Boat ” showcasing a small white vessel floating atop a richly colored and vibrantly kinetic water scene respond to the lushness and peace that can be found in this beachside community.

Brown speaks glowingly about the North Carolina artists she has known and studied with through the years. Among these formative instructors are Jack Berkman who encouraged Brown to study and appreciate the works of historical artists and whose papers reside at UNCW along with Brown’s own thesis project; Alex Powers one of her earliest teachers with whom she studied plein air; Dan Essig of Asheville whose art books she describes as “the most gorgeous things you have ever seen in your life;” and Charles Reid who Brown explains is a colorist who had a substantial influence on her own devotion to color.

A retrospective of Brown’s work appeared at the UNCW Cultural Arts Building Art Gallery in June 2017. Preparing for this comprehensive show granted the artist an opportunity to reflect on her development and history.

Brown describes this as an enjoyable and instructive experience. She particularly notes the differences in being a young artist working toward a lasting career and being an established artist with the bandwidth to share knowledge and be selective in her art-making.

“One important thing that struck me about the retrospective is that I worked harder when I was younger ” she says. “I think that is because there used to be so much pressure to even just find the time. I struggled and really pushed myself.”

In this way she notes one of the many difficulties that female artists face and have faced throughout art history — the challenge of maintaining lives as wives and mothers while achieving success in a highly labor-intensive field. In this revelation as in her art production Brown is self-reflective insightful and honest.

Betty Brown’s work which incorporates an impressive variety of skills and techniques is stunning and impactful. In the sheer diversity of her art production one finds many relatable scenes and arresting moments. And in the honesty and emotion of each individual piece the viewer bears witness to a constantly evolving creative life.