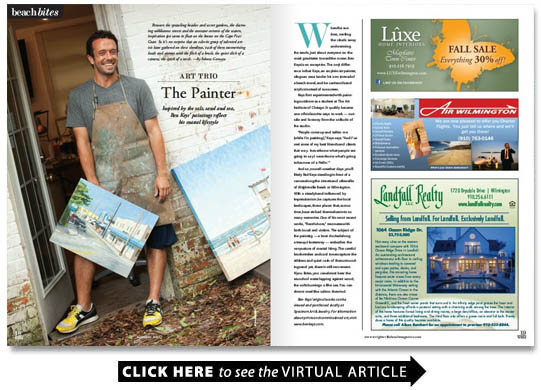 When the sun rises melting the clouds away and warming the sands just about everyone on the coast gravitates toward the ocean. Ben Keys is no exception. The only difference is that Keys an en plein air painter slings an easel under his arm instead of a beach towel and he carries oils and acrylics instead of sunscreen.

Keys first experimented with painting outdoors as a student at The Art Institute of Chicago. It quickly became one of his favorite ways to work outside and far away from the solitude of the studio.

And so on well-weather days youll likely find Keys standing in front of a canvas along the streets and sidewalks of Wrightsville Beach or Wilmington. With a steady hand influenced by Impressionism he captures the local landscapes those places that across time have etched themselves into so many memories. One of his most recent works “Rest Ashore ” resonates with both locals and visitors. The subject of the painting a boat docked along a tranquil waterway embodies the very nature of coastal living. The careful brushstrokes and cool tones capture the stillness and quiet calm of the surroundings and yet there is still movement. If you listen you can almost hear the sounds of water lapping against wood the soft churnings of the sea. You can almost smell the salt on the wind.

Ben Keys original works can be viewed and purchased locally at Spectrum Art & Jewelry. For information about prints and commissioned art visit www.benkeys.com.

Some believe that nature heals that the warmth of a sunrise can soothe that saltwater can wash away worries. Sean Ruttkay is one of those people. But when he graduated from college in 2005 like most new graduates Ruttkay wasnt entirely sure how those ideas would shape the future or what those ideas might bring. Of course that all changed when he embarked on an ocean-crossing once-in-a-lifetime trip to the Pacific Islands with a high-resolution camera. Surfing some of the worlds most sought-after waves and traveling through natures most pristine landscapes Ruttkay snapped frame after frame slowly realizing a dream.

Today Ruttkay brings his lifes work from large-format shots of the oceans rip curl to breathtaking underwater captures into focus.

“I focus a lot on water ” Ruttkay says. “I think its one of those elements that everyone in the world has an affinity with and if you can somehow capture it in its natural element it will be stimulating visually.”

Stimulating some might say is an understatement. Ruttkays electrifying photo “Dry Lip” the capture of a mounting crystalline wave is a testament to the vibrancy and power of nature. And in his underwater encounter “Sea Flight ” the weightlessness and peace of the ocean is almost palpable.

But the impact of Ruttkays vision is not the only remarkable aspect of his work. Stretched over aluminum frames Ruttkays photos can withstand sun wind and rain. The result is a kind of limitless art installed indoors or out enjoyed in even the most delicate of circumstances.

“Most recently Ive really focused on health care environments ” Ruttkay says. “Not only are images of nature healing and rehabilitating but because this art is weatherproof you can spray it with bleach and disinfectant it can be hung in hospitals.”

And so the dream comes full circle. Nature heals.

In gardens all across the world something magical has been transpiring for years: Andy Cobbs frogs come to life. You can find them lounging on patio benches tucked inside thickets of azaleas and toting watering cans. Theyve even made their way into homes pirouetting through the halls in tutus and offering hors doeuvres on copper trays. Clearly these arent your average tree frogs. No these frogs have a much better sense of humor.

Andy Cobb a local sculptor has been working with copper for 15 years. He started with fish and birds working to create a realistic replica of what he admired in nature. But eventually his imagination got the better of him.

One of the first whimsical creatures he sculpted was a tall elegant heron which was ironically people watching through a pair of binoculars.

“I just love making people smile ” Cobb says. “When I see people responding to what I thought was clever or humorous when I have an idea and it transcends thats the best.” And so from that first magical moment forward Cobb let whimsy lead the way.

Currently Cobb is working on one of his enchanted frogs for a client with a gardening store in the Black Mountains. After welding together its steel infrastructure Cobb clips copper and bends the metal by hand to create the smooth curved finishes of the frogs limbs and hands. Its a time-intensive labor of love.

“Every single knuckle has to show ” Cobb says “You must have every detail.” When its finished this frog will hold a terracotta pot for fresh flowers and a real watering can with those carefully crafted hands. Itll tend to a lovely garden somewhere in the mountains. And when people see it rest assured theyll smile.