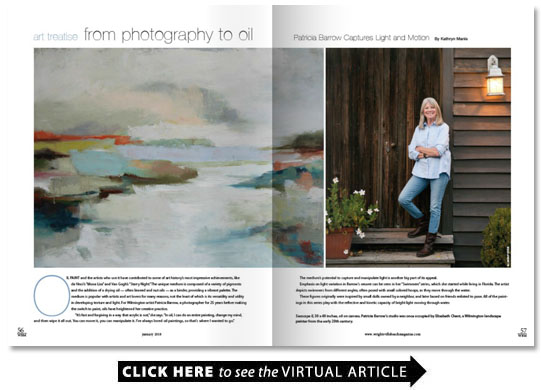 Oil paint and the artists who use it have contributed to some of art history’s most impressive achievements like da Vinci’s “Mona Lisa” and Van Gogh’s “Starry Night.” The unique medium is composed of a variety of pigments and the addition of a drying oil — often linseed and nut oils — as a binder providing a vibrant palette. The medium is popular with artists and art lovers for many reasons not the least of which is its versatility and utility in developing texture and light. For Wilmington artist Patricia Barrow a photographer for 25 years before making the switch to paint oils have heightened her creative practice.

“It’s fast and forgiving in a way that acrylic is not ” she says. “In oil I can do an entire painting change my mind and then wipe it all out. You can move it you can manipulate it. I’ve always loved oil paintings so that’s where I wanted to go.”

The medium’s potential to capture and manipulate light is another big part of its appeal.

Emphasis on light variation in Barrow’s oeuvre can be seen in her “Swimmers” series which she started while living in Florida. The artist depicts swimmers from different angles often posed with small colored hoops as they move through the water.

These figures originally were inspired by small dolls owned by a neighbor and later based on friends enlisted to pose. All of the paintings in this series play with the reflective and kinetic capacity of bright light moving through water.

In “Underwater ” a female figure swims past the sightline of the viewer; her legs can be seen mid-kick as she exits the composition to the left side of the canvas. Light falls on the swimmer’s skin in a bright messy way that replicates the distortion of sunlight through chlorinated water. The large loose brushstrokes and rough textural swaths of white oil paint in this piece mimic the swirling of sunlight and water and recall half-blurry memories of summers spent in swimming pools.

“Underwater” is composed from a sparse palette of blues whites and grays; the red of the woman’s bathing suit provides the only pop of warmth. Keeping her palette simple allows Barrow to focus on movement and imbue the piece with an impressionistic quality. Thus her composition is focused on conveying the experience of a moment rather than creating a realistic representation of a swimmer.

Although the tools and techniques seem very dissimilar Barrow draws a direct line from her work with a camera to her switch to brushes paints and canvases.

The “bread and butter” of her photography career was her portrait work most often in black and white. One of her favorite aspects of photography was processing her own negatives. She enjoyed the tactile experience of coaxing the image to the surface and manipulating the composition by the use of light.

As photo taking and editing became more digital in the 1990s Barrow began to miss that hands-on experience. The search for that feeling is what brought her to oil paints.

“I was a photographer for 25 years and black and white is what I was known for but I loved the idea of painting color and thick paint ” she says. “When things changed in the ‘computer age’ I went from being incredibly hands-on doing my own processing to being more of a technician. And that’s what pushed me to finally make the leap to painting.”

The influence of black and white portrait work is evident in Barrow’s preference for muted tones and use of color and contrast to create drama in her paintings.

In photography particularly in black and white artists rely heavily on contrast and tonal manipulation to heighten the emotional content of their work. In a comparable gesture Barrow limits the number of colors in most of her paintings. She focuses instead on building different shades of each color often employing both extremely dark and extremely light elements in a single composition as well as an energetic paint application to build excitement.

“I like really muted colors ” Barrow says. “I’m not a big fan of paintings where the sky is very blue and the grass is very green and I spend a lot of time mixing my paint colors. When I took a trip to South Africa for example I did several large paintings of animals. But most of them turned out very dark really the opposite of what I actually saw. That’s the fun part for me. I don’t want to just copy what I’m looking at; I like to be creative and make the scene my own.”

In “Seafoam ” Barrow lays down a large section of very bright white paint to depict the foam in the painting’s title. She relies on a subtle gray and dark blues and greens to create the rest of the landscape.

Barrow sways toward the other end of the spectrum in “Purple Landscape ” filling the canvas with a deep dark purple. Her sketch-like application of this intense color suggests both rolling hills and swift-moving thunderclouds. She adds small sections of blinding white to create dimension and a light source in the scene along with a thin horizon line of yellow and orange.

The effect in both cases is a sense of intensity that prompts the viewer to think about the artist’s state of mind or experience in the place rather than focus on the representational details.

Once she decided to start painting Barrow began traveling to France during summers to take workshops and expand her skill. She has not had a technical art education but has learned through extensive diverse and intentional years of practice.

Barrow paints with both a knife and a brush a necessity when working with thick layers of paint. She also paints quickly and rarely draws or sketches anything before setting paint to canvas. “I draw with my paint ” she says. The result is a raised and textured surface for each canvas and a palpable sensation of motion.

This technique is especially relevant to her largest series which features coastal landscapes French fields exotic plains and rustic interiors all in varying degrees of abstraction. The paintings range from slightly abstracted to almost nonrepresentational but all of them share Barrow’s whimsical brushstroke and dramatic color scheme.

Abstraction is an integral part of Barrow’s painting practice helping her convey not just what she sees but how she sees it.

“Beach Roses ” one of Barrow’s prolific landscapes showcases a craggy rolling beachscape in the background. The roughly hewn foreground features bright flowers and tall green grass that flail wildly in an imagined wind. Barrow’s mastery of light and movement is visible here again in the balance of light and dark and her ability to capture the tell-tale signs of a beach breeze in the vibrantly colored plant life.

While she typically works in muted tones “Beach Roses” is an excellent example of Barrow’s skill with brighter combinations when she does choose to use them.

Barrow can always be found making quick work of her gestural and abstracted paintings from her unique home studio which dates to 1845 and was once used as a studio and teaching space by Elisabeth Chant a lively and important figure of the Wilmington art scene during the early 20th century.

Chant founded the Wilmington Art League which would later become the Wilmington Art Association in 1928 and inspired many well-known local artists through her teaching and mentorship. Chant also left behind a large body of landscape paintings a discovery that prompted Barrow’s husband to exclaim to her “It was meant to be your place!”

Barrow’s painting work featured in the Cameron Art Museum’s “State of the Art/Art of the State” running until July 2018 incorporates an interesting array of subject matter and style including unique paintings of clothing and textiles endearing portraits and an impressive series of landscapes. Across this diverse practice she toes a subtle and arresting line between calm soothing moods and what she calls “a little kick ” creating a tension designed to inspire viewers to think outside of the lines and spend a little extra time with each piece.