Art Treatise: The Architecture of Art 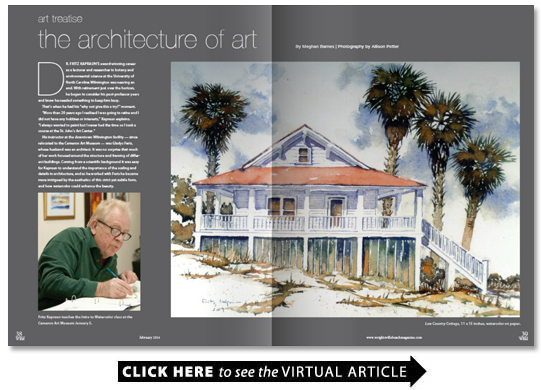 Dr. Fritz Kapraun’s award-winning career as a lecturer and researcher in botany and environmental science at the University of North Carolina Wilmington was nearing an end. With retirement just over the horizon he began to consider his post-professor years and knew he needed something to keep him busy.

That’s when he had his “why not give this a try?” moment.

“More than 20 years ago I realized I was going to retire and I did not have any hobbies or interests ” Kapraun explains. “I always wanted to paint but I never had the time so I took a course at the St. John’s Art Center.”

His instructor at the downtown Wilmington facility — since relocated to the Cameron Art Museum — was Gladys Faris whose husband was an architect. It was no surprise that much of her work focused around the structure and framing of different buildings. Coming from a scientific background it was easy for Kapraun to understand the importance of the scaling and details in architecture and as he worked with Faris he became more intrigued by the aesthetics of this strict yet subtle form and how watercolor could enhance the beauty.

Arising from the course and his interest in architectural-inspired art came something completely unexpected — a second career as a painter. After decades as a university science professor Kapraun is now an artist specializing in clean architectural lines. He is a regular contributor to Alabama-based Southern Living Magazine and his work has been featured from North Carolina to Arizona.

“My interest is in architectural details that provide opportunities to respond to striking contrasts in light texture and geometry ” he says on his webpage.?”My painting is based on the premise that we design and occupy living spaces that become inseparable from our worldview and lifestyle.” Many of the living spaces he paints are houses in Wrightsville Beach and other ocean communities.

In working with watercolor in architectural paintings Kapraun faces challenges that are not as prevalent in other mediums.

“In watercolor you do not paint white you paint everything that is not white so it stands out ” he explains. “If you had a car that was under a slab of snow you would paint the car and everything around the car so the snow looks as if it were painting white. So it is very hard to paint something that is white. You have to turn your mind inside out. It is like having a darkroom experience so you can carry it over in your mind. You are going to paint the white building by not painting the white building but by painting everything around it.”

As he mastered this technique developers began to commission him to paint visual representations of new houses that had not been completed for prospective clients who were unable to visualize the house based on the blueprints alone.

“I would take the elevations from the architects and put them into watercolors — they would use them for promotion and for advertisement ” Kapraun says. “Many of them would then use my framed and matted painting as home-warming presents.”

It was one of these framed and matted illustrations that caught the eye of the folks at Southern Living.

“A couple who are builders and developers on Bald Head Island were golfing on Hilton Head ” he says. “They met a husband and wife team from Southern Living Magazine who were looking for new people so I was put in touch with them. The very next day (editor) Lil Petrusek called me.”

Petrusek called Kapraun after 5 p.m. a time when he was often bombarded with solicitors. When she introduced herself and stated that she was with Southern Living Magazine he politely said that he was not interested and hung up the phone.

“She called back yelling ‘Fritz! Fritz!’ She told me she knew someone who knew me and then she asked me to do some work for them ” he says.

And with that Kapraun became one of the prominent illustrators for Southern Living Magazine.

But he did not stop there. When visiting his sister in Tucson Arizona he frequented the Southern Arizona Watercolor Guild Signature Member event an invitation-only show. He learned about a separate art benefit frequented by the cattlemen and oilmen of the area and also some of the most prominent families in the United States.

Eager for her brother to be showcased in the event his sister got him an invitation to present his work — and he has been invited every year for 14 years.

“It is a unique type of an auction ” Kapraun explains. “All of the art work is displayed in this old Spanish Colonial building; it is like going into a mansion without furniture. Each painting has a slip of paper behind it and all of the people who want to bid on it will sign their name. The people are bidding against each other. The price of the painting does not change. A red line is then drawn under the last signature.”

After the red line is drawn the auctioneer rolls dice to determine what name and corresponding number on the list will be chosen as the winner. Even though some paintings do not draw a single bid Kapraun’s paintings often require a second sheet of paper for all the signatures.

His second career has taken off with his work featured in the homes of some of the most influential people in the country as well as in multiple magazines and journals. But he hasn’t completely forsaken his first career. He still teaches but instead of lecturing in botany he gives watercolor instruction in Italy and at the Cameron Art Museum.

“Since my background is in science I teach from a very technical point of view ” he says. “I point out six basic principles. And we will talk about one of these each of the six weeks and I will give them projects to work at home and bring in for homework. At the end of six weeks they will know what they have to learn to paint with watercolor.”