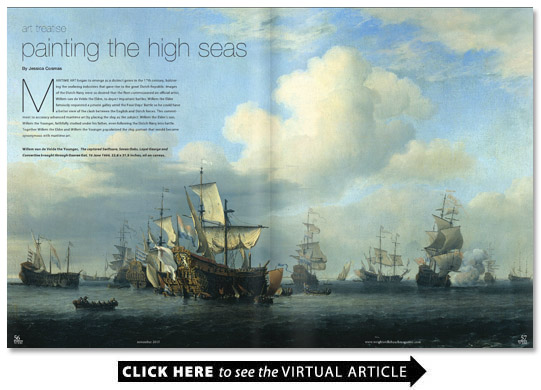 Maritime art began to emerge as a distinct genre in the 17th century bolstering the seafaring industries that gave rise to the great Dutch Republic. Images of the Dutch Navy were so desired that the fleet commissioned an official artist Willem van de Velde the Elder to depict important battles. Willem the Elder famously requested a private galley amid the Four Days’ Battle so he could have a better view of the clash between the English and Dutch forces. This commitment to accuracy advanced maritime art by placing the ship as the subject. Willem the Elder’s son Willem the Younger faithfully studied under his father even following the Dutch Navy into battle. Together Willem the Elder and Willem the Younger popularized the ship portrait that would become synonymous with maritime art.

In the tradition of great ship portraits is Jerry Miller’s Elizabeth II. Part of celebrations for America’s 400th anniversary Elizabeth II was constructed in 1984 to commemorate the original vessels that carried the first English colonists to America. Built and berthed in Manteo North Carolina the ship remains a popular attraction today. In this painting Miller depicts the square-rigged ship as it would have appeared in the 16th century: navigating the Atlantic Ocean toward Roanoke Island. Flashes of pale golden sunlight break at the horizon over the calm waters. The balanced composition emphasizes halcyon impressions belying Roanoke’s ill-fated Lost Colony. With a bright dawn Miller focuses on the promise of opportunity Elizabeth II embodies. The artist currently resides in Cary North Carolina. A former architect Miller left his practice in the early 1970s and pursued a career as a full-time artist. Miller parlays his architectural background into creating detailed renderings of historically significant landmarks throughout his home state of North Carolina.

Paul Hee died in 2011 leaving behind an outstanding legacy of maritime scenes. After serving in the U.S. Navy during World War II and enjoying a successful career as a cruise ship executive Hee translated his lifelong love of the sea into paint and canvas. Following his retirement Hee moved to Beaufort North Carolina and devoted himself to painting. The artist carefully applied European style and technique to American maritime scenes. Inspired by Beaufort’s rich nautical history Hee painted the Confederate States Steamer Nashville. The Nashville returned to Beaufort in the winter of 1862 after successfully raiding Union commerce vessels across the Atlantic. Hee painted CSS Nashville in a triumphant scene. Dark smoke billows from the ship’s funnel leading the eye to a dark vermillion conflagration. The blazing remnants of Harvey Birch the first ship to fall victim to the Nashville’s attacks is left at the horizon. The Nashville sails victoriously ahead cutting through the teal waters.

As a child in Wisconsin Rod Roskom enjoyed sketching wildlife. But as he grew he pursued music and eventually engineering. Now approaching retirement Roskom was encouraged to pick up a paintbrush and rediscover his love of the visual arts. Roskom painted Cape Fear Passage from his home in Southport North Carolina. Roskom carefully applied thin washes of acrylic paint before embellishing with details like wood grain and the sinew of coiled rope. The direction of the decking and rigging move the eye forward to the Cape Fear Memorial Bridge creating the illusion of depth. Roskom plays with perspective so viewers can easily imagine themselves standing on the boat. The canvas sail rustling in the wind and the river lapping at the boat can almost be heard. Similar to other maritime artists Roskom precisely renders his nautical subject but he forgoes the remote view of a storied vessel. He resists conventions that previously defined the ship portrait offering an intimate look from an anonymous schooner on familiar waterways.

Kirah Van Sickle a former medical illustrator has the high technical skills and eye for detail required to paint a traditional ship portrait. Rather than a literal representation the Wilmington artist favors abstraction. Her mixed media work Aqueduct allows a more complex approach to maritime art. Van Sickle establishes the sea as a metaphor for life’s trials and tribulations. The simple boat represents the human soul traversing great struggle drifting toward archways symbolizing spiritual change for the better. Van Sickle incorporates several techniques for added dimension. Using a pumice stone gel medium she added grit to a cresting wave. Twine and fishing line are pinned to the surface creating the boat’s mast and rigging. A figure from an anatomy textbook is transformed into an apparition by layers of paint. Recalling the days when sailors only had the stars to guide their way Van Sickle transferred a map of constellations to the painting. Van Sickle slyly evokes history only to defy custom presenting a totally fresh interpretation on maritime art.