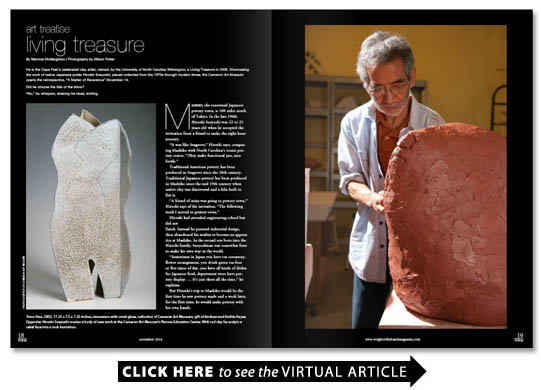 He is the Cape Fear s celebrated clay artist named by the University of North Carolina Wilmington a Living Treasure in 2006. Showcasing the work of native Japanese potter Hiroshi Sueyoshi pieces collected from the 1970s through modern times the Cameron Art Museum opens the retrospective A Matter of Reverence November 14.

Did he choose the title of the show?

No he whispers shaking his head smiling.

Mashiko the renowned Japanese pottery town is 100 miles north of Tokyo. In the late 1960s Hiroshi Sueyoshi was 22 or 23 years old when he accepted the invitation from a friend to make the eight-hour journey.

Hiroshi had attended engineering school but did not finish. Instead he pursued industrial design then abandoned his studies to become an apprentice at Mashiko. As the second son born into the Hiroshi family Sueyoshisan was somewhat freer to make his own way in the world.

Sometimes in Japan you have tea ceremony flower arrangement you drink green tea four or five times of day you have all kinds of dishes for Japanese food department store have pottery display.  It s just there all the time he explains.

His first piece was a five-inch saucer. He was instructed to reproduce the shape 500 times but did not do it he says eyes twinkling. The production work was taxing the days long ones. After dinner come back to the studios was kind of young but was still worn out he says softly.

Now 46 years later in his studio at CAM s Pancoe Education Center last month Hiroshi was preparing pieces for his upcoming one-man show. He dabbed wet sludge with a sculpting tool to stucco the surface of a large red clay rock roughly half his size.

Defining the ages old Japanese art aesthetic is hard to translate into words.

I think it has to do with simplicity and respecting nature for the way it is Hiroshsi says. To leave nature alone.

Hiroshi came to North Carolina in 1971 to help design and build Humble Mill Pottery in Asheboro. He has also worked at Seagrove Pottery as a production potter as well as with Sampson Community College in Clinton as a pottery instructor. At the suggestion of a friend he applied for and was selected by the North Carolina Arts Council as a resident artist. For four years from 1976 until 1980 he taught pottery first at Wilson County Technical Institute and at Cape Fear Community College. When his residency was complete he continued teaching at CFCC. He came to the Cameron Art Museum in January 2006.

I think North Carolina is very similar to where I grew up — central part mountains — very similar altitude. That s one of the reasons I decided to stay. I was going to stay five years. Wilmington seemed like a nice town by the water seafood. I felt comfortable.

He believed he could make a living here.

Japan is very old very traditional very rigid. In a way you play classical music. It s been done over and over. In a way [here] is like country music jazz more open  so I can make some pieces. If I was in Japan I would have a hard time making a living.

Grounded in the rigid Japanese tradition Hiroshi s expression is matte and shiny rough and smooth sharp and soft angled and curved. His forms are singled out among others.

My American friends tell me my work is so Asian and my Japanese friends say so Western he laughs.