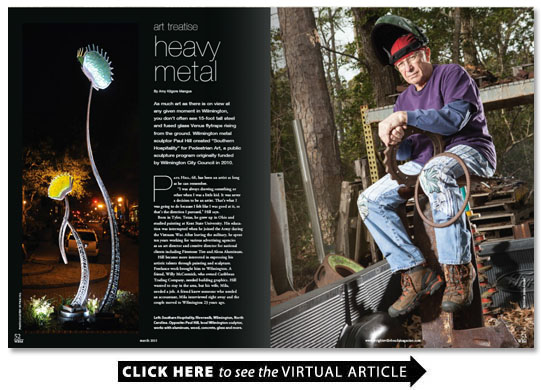 As much art as there is on view at any given moment in Wilmington you don’t often see 15-foot tall steel and fused glass Venus flytraps rising from the ground. Wilmington metal sculptor Paul Hill created “Southern Hospitality” for Pedestrian Art a public sculpture program originally funded by Wilmington City Council in 2010.

Paul Hill 68 has been an artist as long as he can remember.

“I was always drawing something or other when I was a little kid. It was never a decision to be an artist. That’s what I was going to do because I felt like I was good at it so that’s the direction I pursued ” Hill says.

Born in Tyler Texas he grew up in Ohio and studied painting at Kent State University. His education was interrupted when he joined the Army during the Vietnam War. After leaving the military he spent ten years working for various advertising agencies as an art director and creative director for national clients including Firestone Tire and Alcoa Aluminum.

Hill became more interested in expressing his artistic talents through painting and sculpture. Freelance work brought him to Wilmington. A friend Willy McCormick who owned Caribbean Trading Company needed building graphics. Hill wanted to stay in the area but his wife Mila needed a job. A friend knew someone who needed an accountant Mila interviewed right away and the couple moved to Wilmington 23 years ago.

Roughly eight years later he put down his paintbrush and picked up some metal.

“Initially I used a drill and rivets because I didn’t have a welder and started putting pieces together that way. And once that got too difficult to cut I switched to a welder. One thing led to another and pieces got bigger and bigger ” Hill says.

Hill works in welded metals ranging from copper to steel to create inspired sculpture for public and private places.

“My main interest is public art ” he says. “I enjoy that the most. I thought the flytraps would be a good subject matter for Wilmington because this is the only place they grow.”

Each piece tells a story and he is sometimes inspired by subjects in Greek mythology.

“I have one piece called ‘Tears for Sisyphus ‘ and there’s a story with that ” he explains. “‘For No Apparent Reason ‘ a goat on top of an 18-foot argan seed is a story about the goats that climb trees in Morocco. So everything has a story to it and then I interpret it the way I see it.”

Hill often uses animal forms to represent human emotions and situations. “Straining to Be” is a dog lunging forward restrained by a heavy bar with a leash on a spring.

“So I give ‘Straining to Be’ up for grabs as to how anybody interprets it which is really a good part of public art. I can see it one way but it lends itself to a lot of interpretations ” he says.