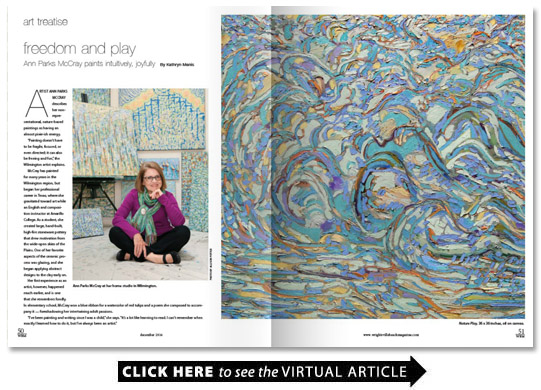 “Painting doesn’t have to be fragile focused or even directed; it can also be freeing and fun ” the Wilmington artist explains.

McCray has painted for many years in the Wilmington region but began her professional career in Texas where she gravitated toward art while an English and composition instructor at Amarillo College. As a student she created large hand-built high-fire stoneware pottery that drew motivation from the wide-open skies of the Plains. One of her favorite aspects of the ceramic process was glazing and she began applying abstract designs to the clay early on.

Her first experience as an artist however happened much earlier and is one that she remembers fondly. In elementary school McCray won a blue ribbon for a watercolor of red tulips and a poem she composed to accompany it — foreshadowing her intertwining adult passions.

“I’ve been painting and writing since I was a child ” she says. “It’s a lot like learning to read. I can’t remember when exactly I learned how to do it but I’ve always been an artist.”

McCray who works predominantly in oils is an intuitive painter. She does not plan her paintings but instead approaches the canvas with complete freedom and excited anticipation.

Nature in all its iterations is her primary muse. She describes her artistic impulse as inherent to her being. She illustrates this process as an exultation or release.

“I am in all of these paintings ” she says. “They are all stored up inside of me and I just have to let them out.”

When friends and patrons ask the artist what the hardest part of painting is she bemusedly replies “Nothing! Insecurity for me only comes with no canvas.”

As a frequent traveler McCray is never short on inspiration and she often makes small trips to refresh her creative palate. Though she finds joy in travelling to art communities to experience the works of other artists and draw inspiration from new landscapes she thinks of Wilmington as the “perfect home base.”

In fact she settled on Wilmington after testing out Santa Fe New Mexico and Charleston South Carolina.

McCray is warm and friendly with an infectious smile and the artist’s enthusiasm for life is evident in many of her paintings. Works like “Nature Play ” depicting a swirling mix of radiant cloud and water motifs and “Following the Hidden Path ” revealing an abstracted trail into a field of brightly colored flowers and a vibrant skyline invite viewers to notice and appreciate the beauty around them.

The experience of creating her art “is like playing; total freedom for me ” she says and this sense of enjoyment is visible in her cheerful color choices harmonious abstractions and use of playful titles.

McCray’s work reveals textural quality and intense visceral emotion that emanates from each piece. It is very modern with a frequent use of large canvases complexity of color palette and often high-abstraction. If one had to liken her oeuvre to a known style it would be the Post-Impressionists “after Monet and before Kandinsky.”

In many ways McCray would have fit in well with the Post-Impressionists who practiced mainly from the mid-1800s to the early 1900s. They were one aspect of a larger fin-de-si�cle escape into the aesthetic that included the Symbolists Decadents and a variety of other writers philosophers and critics.

This period and style in art history is notoriously difficult to define due to the sheer variety of expression and technique employed by its artists. In fact they did not think of themselves as a collective at all. Instead these artists were dubbed the Post-Impressionists by the art critic Roger Fry in the 1910 exhibition at the Grafton Galleries in London titled “Monet and the Post-Impressionists.”

What they did share was an earnest desire to explore personal forms of expression through painting and frequently a passion for the beauty found in nature. Common was the belief that more could be conveyed through pure line shape and color than with traditional naturalism.

Also prominent was the conviction that the artist’s goal should be to communicate subjective experience and unique sensation. While many Post-Impressionist techniques developed out of Impressionist foundations they almost universally left behind their predecessors’ subtler handling of pigment and commitment to realism.

Edvard Munch the Norwegian symbolist painter and printmaker whose later-in-life paintings revealed both his indebtedness to Impressionism and influence on Post-Impressionism famously wrote “Nature is not only what is visible to the eye … it also includes the inner pictures of the soul.”

Paul C�zanne a French Post-Impressionist was known for his innovation in landscape painting. His scenes were abstracted through manipulated perspective and geometric brushstrokes larger and more heavily applied than those of his Impressionist forebears. His paintings were meant to drop the viewer into a moment of fleeting feeling and experience not necessarily to represent a landscape literally and are still appreciated for their palpable emotional content.

Much of McCray’s work reveals a similar propensity for a bold application of paint and emphatic intensity. Paintings like “The Roaring 20s” employ large brushstrokes and swaths of bright colors generously layered to create a highly textured surface. This technique leads to a finished piece that captures the excitement and romance often associated with the popular and artistic culture of the 1920s. Clusters of white and yellow give the impression of marquis lights large sections of rich reds and glimmering yellows grant an air of Old Hollywood glamour and a discerning eye can isolate the small flapper figure. As with many of McCray’s works this painting has a contagious quality and a sense of drama and passion radiates from the canvas.

When viewing an abstract painting particularly one with the textural quality of McCray’s works one can almost imagine the artist’s hand placing each mark drop or line. In a naturalistic landscape on the other hand the artist’s mark is often lost to the goal of the overall picture or an immersion in the scene.

Newer paintings adhere to her celebration of freedom play and beauty but employ a subtler hand. In “Seaside Sunrise ” the brushstrokes are delicately and evenly applied. Blue and green jewel tones are finely layered throughout and small sections of color gingerly wrap around an orange-and-red sphere which recalls a rising sun. Whereas earlier paintings revel in a rougher more dramatic application the artist’s hand appears more subdued contemplative and serene in this recent piece.

“McCray’s work is vibrant and colorful and many people gravitate toward it ” says Miriam Oehrlein owner of New Elements Gallery in downtown Wilmington where the artist’s work is on display. “Her work has an amazing energy and people respond to it very quickly. It seems to strike a chord with everyone. It is attractive compelling and nonthreatening.”

The breadth and depth of McCray’s character and experience can be seen in her impressively large body of work. Ranging from bold Southwestern scenes inspiring movement and extolling fortitude to quiet intimate depictions of rainy moments that somehow recall both stillness and rebirth every one of the artist’s paintings invokes a feeling not easily explainable.