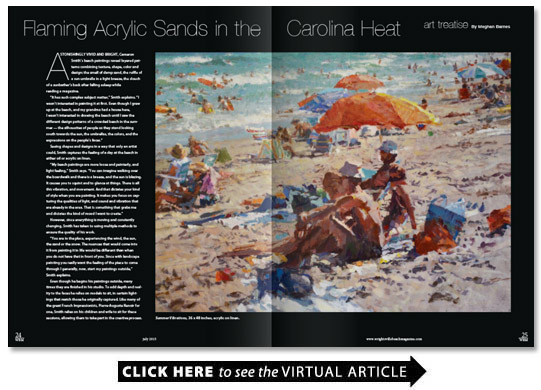 Astonishingly vivid and bright Cameron Smith’s beach paintings reveal layered patterns combining texture shape color and design: the smell of damp sand the ruffle of a sun umbrella in a light breeze the slouch of a sunbather’s back after falling asleep while reading a magazine.

“It has such complex subject matter ” Smith explains. “I wasn’t interested in painting it at first. Even though I grew up at the beach and my grandma had a house here I wasn’t interested in drawing the beach until I saw the different design patterns of a crowded beach in the summer — the silhouettes of people as they stand looking south towards the sun the umbrellas the colors and the expressions on the people’s faces.”

Seeing shapes and designs in a way that only an artist could Smith captures the feeling of a day at the beach in either oil or acrylic on linen.

“My beach paintings are more loose and painterly and light feeling ” Smith says. “You can imagine walking over the boardwalk and there is a breeze and the sun is blazing. It causes you to squint and to glance at things. There is all this vibration and movement. And that dictates your kind of style when you are painting. It makes you focus on capturing the qualities of light and sound and vibration that are already in the area. That is something that grabs me and dictates the kind of mood I want to create.”

However since everything is moving and constantly changing Smith has taken to using multiple methods to ensure the quality of his work.

“You are in the place experiencing the wind the sun the sand or the snow. The nuances that would come into it from painting it in life would be different than when you do not have that in front of you. Since with landscape painting you really want the feeling of the piece to come through I generally now start my paintings outside ” Smith explains.

Even though he begins his paintings outside many times they are finished in his studio. To add depth and reality to the faces he relies on models to sit in certain lightings that match those he originally captured. Like many of the great French Impressionists Pierre-Auguste Renoir for one Smith relies on his children and wife to sit for these sessions allowing them to take part in the creative process.

In the process Smith’s work grows more realistic capturing the close-up emotion in beach-goers’ faces. The love and respect for the models and the subjects shine through his paintings.

“I have five kids so my wife and kids will sometimes come and model for me if I need close-up figures and it’s great ” Smith says. “It will inspire them to create their own projects which I often help them with and really brings us together as a family.”

Many people who walk the Wrightsville Beach strand see Smith painting and stand as an onlooker watching his creative process. Some of these people introduce themselves to him and share their personal stories and impressions. It is during these moments Smith is able to see the reach and effect he has on his audience not only offering detailed refined art but also inspiration and conversation as he creates.

“The ones people usually have a strong connection to are of Crystal Pier before they were able to rebuild it; the soft sagging structure almost falling into the ocean. That and the pieces which feature surfers are ones that have stuck with people and they often share their stories and memories with me ” Smith says.