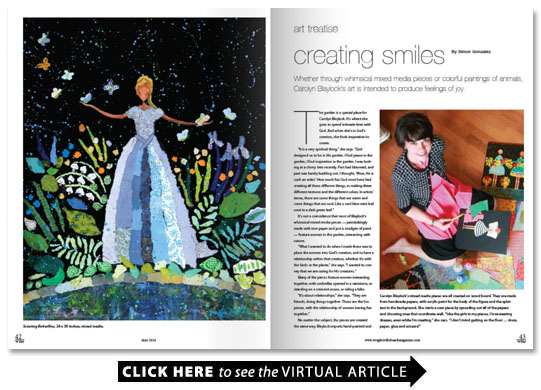 Whether through whimsical mixed media pieces or colorful paintings of animals Carolyn Blaylock’s art is intended to produce feelings of joy.

The garden is a special place for Carolyn Blaylock. It’s where she goes to spend intimate time with God. And when she’s in God’s creation she finds inspiration to create.

“It is a very spiritual thing ” she says. “God designed us to be in His garden. I find peace in the garden I find inspiration in the garden. I was looking at a cherry tree recently. Part had bloomed and part was barely budding out. I thought ‘Wow He is such an artist.’ How much fun God must have had creating all these different things in making these different textures and the different colors. In artists’ terms there are some things that are warm and some things that are cool. Like a cool blue mint leaf next to a dark green leaf.”

It’s not a coincidence that most of Blaylock’s whimsical mixed media pieces — painstakingly made with torn paper and just a smidgen of paint — feature women in the garden interacting with nature.

“What I wanted to do when I made these was to place the women into God’s creation and to have a relationship within that creation whether it’s with the birds or the plants ” she says. “I wanted to convey that we are caring for His creatures.”

Many of the pieces feature women interacting together with umbrellas opened in a rainstorm or standing on a crescent moon or riding a bike.

“It’s about relationships ” she says. “They are friends doing things together. Those are the fun pieces with the relationship of women having fun together.”

No matter the subject the pieces are created the same way. Blaylock imports hand-painted and hand-made paper to her studio in Winston-Salem. Much of it comes from developing nations in Africa and Asia.

“The women make the paper to sustain their families ” she says. “They come in these big sheets. When I make the designs I’m tearing them into very very tiny pieces.”

Blaylock created the first one about nine years ago in an attempt to convey what she experiences when she is in the garden.

“It really started as an experiment just for me to try to translate how I feel when I’m out in nature into a piece of art ” she says.

She liked how it came out and decided to do more of the whimsical women. She starts with a general idea of what the finished piece will look like but rarely with a definite plan. Sometimes she starts by drawing the outline of the body. Often she doesn’t.

“It’s very intuitive ” she says. “I just go with the flow. I might start with a leaf and then say next to that leaf I want to do a dark leaf.”

When all of the colorful paper is glued into place she will take out a brush.

“I use paint for the faces and the body and then I sprinkle ” Blaylock says. “I use a brush and just fling it to have the sprinkles — like the reflection in the water.”

One constant is something that isn’t there: None of the women have facial features.

“I want the person who’s looking at it to feel that they can make it be whatever they like ” she says. “It can be them it can be someone else. Without specific features your brain just makes it.”

Some of the women are given names. Some have a verse penned by the artist that goes with the visual; her mixed-media pieces have been picked up by a greeting card company and released as a line called Kindred Lane and Blaylock who has an advertising degree from the University of Georgia writes the sentiments.

Occasionally they have a true-life poignant story. “Scouting Butterflies” features a woman wearing a blue dress in a garden surrounded by butterflies. It was created when her daughter’s best friend tragically lost a baby. The child who was stillborn would have been named Scout.

“I did it for her to put her in the garden where she could find healing and peace ” Blaylock says. “Scout is a new creation in heaven.”

Creating with paper and glue takes Blaylock back to her childhood when she would watch “Captain Kangaroo.” She especially enjoyed the segments with the craft box that had scissors and glue.

And designing the women’s outfits gives her a little taste of what she once thought might be her profession.

“As a teenager I was very interested in fashion design ” she says. “I made my own clothes. I considered doing that as a career. Now I get to use all those fun things designing the dresses with the paper. It’s really fun.”

Joy is a constant in Blaylock’s work whether she is creating the mixed media pieces or painting the cows and bears and other colorful animals that she is perhaps best known for.

“That’s it for me ” she says. “It’s really to make people smile. I hear that often from people who call about my work: ‘Oh it makes me so happy.’ That’s what I want. There’s a lot of dark art out there.”

Her animals typically gaze at the viewer often with a knowing smile as though they are sharing a private joke with the woman who painted them.

“I’ll be at the easel all by myself and I will start giggling ” Blaylock says. “Their personalities come out. It’s that joy. There are elements of personification with the grins.”

Some of her cows have even found their way into Oprah Winfrey’s collection. Not bad considering Blaylock stumbled into the subject matter.

“I was teaching a painting class the same women every Thursday and someone asked me if I would do a demonstration of a cow ” she says. “I had never painted a cow. It was one of those ‘aha’ moments. I had so much fun painting that cow and people were smiling when I was painting it. That cow ended up on the front page of the art section of the Raleigh newspaper. Then a gallery contacted me because they liked it. I said ‘OK maybe I have something here.’ It made people happy. I have always loved bears and so I started doing the bears. Those really took off. All the animals it zeroed in on my joy in painting.”

Oil paint is the preferred medium for her fine art whether animals flowers or landscapes.

“I enjoy the color of the oil ” she says. “It’s richer to me. The texture is very creamy. You have more working time with it. I do a lot of palette work and it has more body to it.”

Layers of rich vibrant colors are also a constant.

“Artistically what I’m after is for people to appreciate the color to really be drawn in by the relationship of the color and the beauty of color ” she says. “I’ve always loved color. Three years ago at Thanksgiving my mom asked ‘What is your first memory?’ I said the color red. I remember my mobile over my crib. There were four cardinals and they were bright red. Her jaw dropped. She said there is no photograph of that and it’s absolutely right. And red is my favorite color.”

She also enjoys working on big canvases with big brushes and a palette knife.

“I just really enjoy the big ” she says. “I feel like I’m part of it. You start becoming one with the piece. It’s much easier for me to be free with the creativity and expression when it’s big. I’ll use the palette knife and scoop up a big blob of paint that hasn’t been thoroughly mixed with different colors. When you push down on the palette knife it’s kind of like frosting a cake. You get a surprise because the color squishes and mixes and does its own thing.”

Whether working with big blobs of paint or tiny pieces of paper Blaylock’s aim is the same. She wants everyone who views her work to smile. That’s almost always the reaction with the mixed-media pieces.

“The gallery owners tell me that women come in and they’ll just put their hands on their chest and go ‘Oh I love that.’ They have some emotional connection ” she says. “I love hearing that story. My goal as an artist is to make people happy and to bring them joy.”