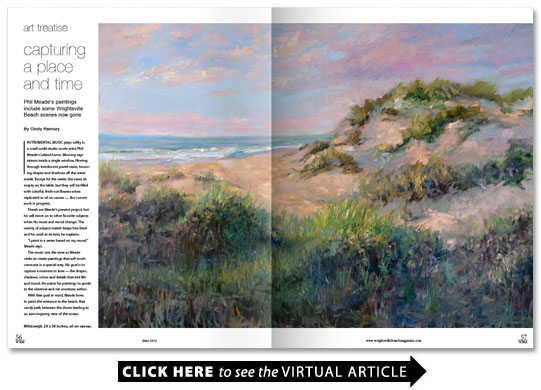 Instrumental music plays softly in a small sunlit studio inside artist Phil Meade’s Leland home. Morning rays stream inside a single window filtering through translucent pastel vases bouncing shapes and shadows off the water inside. Except for the water the vases sit empty on the table but they will be filled with colorful fresh-cut flowers when replicated in oil on canvas — the current work in progress.

Florals are Meade’s present project but he will move on to other favorite subjects when his muse and mood change. The variety of subject matter keeps him fresh and his work at its best he explains.

“I paint in a series based on my mood ” Meade says.

The music sets the tone as Meade seeks to create paintings that will touch someone in a special way. His goal is to capture a moment in time — the shapes shadows colors and details that add life and mood. He wants his paintings to speak to the observer and stir emotions within.

With that goal in mind Meade loves to paint the entrance to the beach that sandy path between the dunes leading to an awe-inspiring view of the ocean.

“There’s that feeling of anticipation entering the path to the beach then seeing the ocean for the first time after traveling to get there ” Meade says.

He and Kathie his wife of 32 years used to travel great distances from their New Jersey home to visit family and spend a week at Wrightsville Beach every summer. Now retired they live just a short drive away from the seashore but the proximity doesn’t diminish the emotion stirred by that first view of the ocean.

“I still get that feeling ” Meade says. “The lure of the ocean is abstract. There’s always an anticipation.”

Many versions of that foot-printed path can be found in his studio: flower-edged fencing guiding the way; swaying sea oats capping the dunes; waves crashing in the distance; and a warm glow of morning light washing over the scene. Each has a different focal point — a small boy with a fishing pole heading to the ocean; chairs perched at the edge of the water; a solitary woman enjoying that first glimpse; or simply an empty path leading to the ultimate focus.

While the ocean itself is timeless beach towns are not. Having witnessed many changes through decades of annual visits Meade seizes each opportunity to encapsulate a moment in time.

One 1990 painting of a row of Wrightsville Beach cottages captures an era past. Meade remembers seeing a particular white bungalow while walking down the beach and knowing he needed to paint that house. When he and his wife visited the same spot the following year it was gone. Its absence created a lasting sense of nostalgia for a simpler place and time that Meade is thankful to have preserved in his memory and on canvas.

Whether walking the beach working in his flower garden or visiting the mountains Meade is constantly viewing his world through an artist’s eye thinking how what he sees at that moment would translate into a painting and putting that information in his memory bank.

Meade uses photography too to capture images that become the foundation but not the final composition of his paintings. He could use details from as many as 50 photos in one piece.

He often uses cut flowers from his garden as a muse for his work.

“Gardening is a big part of my life ” Meade says.

During the spring and summer he spends most mornings working in his flower garden then paints in the afternoons.

“I like to paint when I have two to three hours open in front of me ” Meade says.

He never paints for longer than that. The concentration required by the creative process exhausts him and the work suffers. The emotional investment can be draining as well.

“I might think I’m making brilliant strokes ” Meade says of work done in time beyond his personal threshold “but in the morning they don’t look so good.”

Meade incorporated the use of multiple photographs to create an entirely new reality in his graphic design work and that technique has carried over to his painting. No matter how many photographs he takes he always likes to go back to the actual scene to absorb the mood and feeling not present in the photos.

Painting has long been Meade’s passion but not his career. After studying at the Newark School of Fine and Industrial Arts in New Jersey he took a job as a graphic designer for the security it provided while raising a family. He worked for years in New York City and later closer to home in New Jersey. He and Kathie moved to North Carolina after retirement.

Meade continues to hone his craft by paging through art magazines viewing art programs on television and watching videos of painting techniques on his computer. He participates in a critique group whose members meet monthly to discuss their most recent works. He takes painting workshops and teaches them as well.

The best teacher is the work itself. Meade loves to be challenged and finds that in painting water.

“I want to feel the depth to feel like it’s water ” he says. “That is a challenge.”

Meade has entered many art shows and won awards but the greatest reward is a positive response to his work. He knows that he must paint what appeals to himself first and put it out there hoping that it will touch someone else on some personal level.

“When I enter a show it doesn’t matter if I don’t win an award ” Meade says. “If someone purchases a painting that means I made a connection with that person. That is what I want to do.”