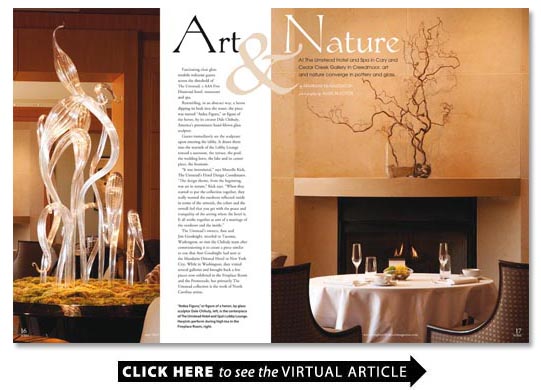 Fascinating clear glass tendrils welcome guests across the threshold of The Umstead a AAA Five Diamond hotel restaurant and spa.

Resembling in an abstract way a heron dipping its beak into the water the piece was named Ardea Figura or figure of the heron by its creator Dale Chihuly Americas preeminent hand-blown glass sculptor.

Guests immediately see the sculpture upon entering the lobby. It draws them into the warmth of the Lobby Lounge toward a sunroom the terrace the pool the wedding lawn the lake and its centerpiece the fountain.

It was intentional says Marcelle Kick The Umsteads Hotel Design Coordinator. The design theme from the beginning was art in nature Kick says. When they started to put the collection together they really wanted the outdoors reflected inside in terms of the artwork the colors and the overall feel that you get with the peace and tranquility of the setting where the hotel is. It all works together as sort of a marriage of the outdoors and the inside.
The Umsteads owners Ann and Jim Goodnight traveled to Tacoma Washington to visit the Chihuly team after commissioning it to create a piece similar to one that Ann Goodnight had seen at the Mandarin Oriental Hotel in New York City. While in Washington they visited several galleries and brought back a few pieces now exhibited in the Fireplace Room and the Promenade but primarily The Umstead collection is the work of North Carolina artists.

Mrs. Goodnight had seen in 2005 an exhibit at the North Carolina Museum of Art called The Potters Eye and it featured the large-scale pottery of Ben Owen III and Mark Hewitt Kick says. She loved it. That was a great show and she thought We really need this in the hotel. North Carolinas got a great pottery tradition but it always runs that line between art and craft. When she saw these huge pots in this exhibition and it was in the art museum she said This is fine art.

The color palette of both potters glazes complement the color palette of the hotel.
It really helped me become an amateur interior designer says Ben Owen III. Working with hotel designer Frank Nicholson Owen III says its been a lot of fun designing what he looks for proportion and color.

Collaborating with SAS the Goodnights software corporation and The Umsteads parent companys art and scenic crew Owen III overproduced the dozen pots Ann Goodnight commissioned to allow her the latitude to make choices. He delivered this larger body of work and was pleasantly surprised to learn she accepted all of it.

I love that story Kick says. I think its so charming because it was really hard for Mrs. Goodnight to say These are good and these arent as good. She loved them all; she really loved them all.

They were the beginning crew that assisted and still assist Mrs. Goodnight in art purchasing and placement. The team not only investigates art for her they also frame and they hang and have a huge studio where they can put things together for her. SASs collection is quite immense. All of their buildings have artwork in them Kick says.
The crew also mounts the Promenades rotating exhibits that change four times a year and nurses original pieces that may have been accidentally damaged.

Theres no one like in a museum whos guarding the art. People touch things so whenever theres a scratch or a piece that popped off theyre right over here ready to get it fixed Kick says.

Hewitts and Owen IIIs pots are considered the stars of the hotel. In addition to what is now on display and in storage both potters are being commissioned to create new large-scale pieces for the hotels spa which is in renovation this spring for three months.

Owen III ponders better ways to build his big pots. Already each piece is created in stages. Large pots are made in three or four pieces. Extremely large pots five feet tall or larger may be created in seven or eight pieces.

Resolving pottery design challenges is a trait passed down from one generation to the next. Owen III learned the pottery tradition at the knee of his grandfather Ben Owen Sr. whose work is among several revered North Carolina potters featured in a tiny museum at Cedar Creek Gallery about 25 minutes from The Umstead Hotel and Spa in Creedmoor.
Owen III says he recalls that Cedar Creeks co-founding potter the late Sid Oakley visited his grandfather during Cedar Creeks early years.

Today Cedar Creek Gallery surrounded by its enclave of studios and vernacular tobacco barns continues to thrive in Granville County. On a chilly March day spring pokes its head out of winters bare landscape. The sun flirts through gray clouds to the flint metal roof of the gallery building where the curl of smoke rises from the brick chimney sending the unmistakable scent of wood fire into the air.

Forty-five years ago this acreage was no more than untilled farmland. Its where Sid and Pat Oakley planted their pottery studio in 1968 and grew a following. Sparked by the synchronicity of shared creative spirits co-founder Pat Oakley and daughter Lisa Oakley a glassblower are the co-ops leading artists seeding their kilns and furnaces with new work. Their open door policy has welcomed both potters and glassblowers to their rural outpost for decades; some pass through like spring rains leaving fresh blooms; others arrive and never leave.

Pat Oakley is a quiet self-effacing matriarch. It is always springtime in her ivy-covered studio. Potted plants fill her window which looks over Cedar Creeks central lawn. She begins each pot by pinching off a piece of porcelain clay and rolling her own coils.
People ask me why I dont have someone else roll my coils. But rolling coils I find is very therapeutic Pat says. Knowing that she took an 18-year hiatus from pottery to pursue energy work makes her statement that much more relevant.

Lisa Oakley watches her mother work as the base takes shape.

There are black and white photographs of Pat Oakley during this era in the gallerys museum. Her dark hair pulled away from her face she works the same idiom into an oversized pot that is now part of Cedar Creeks permanent collection.

This will be Lisas one day Pat says. If she wants it.

Lisa Oakley says her parents made their pots at home in Butner and brought them to the Creedmoor farm to fire then took them home to glaze them and brought them back for the second firing. Eventually they decided to move to Cedar Creek on Fleming Road.

One January the Penland School of Crafts catalogue came across Lisas desk.
Penland was always this place that I was familiar with she says.

January is so very quiet here compared to December she says. I was reading the catalogue. There was a class and it was beginner and it said glassblowing and I thought That sounds interesting.

I went there to alleviate boredom! I called home the first night and said This is what I want to do.

She says she was lucky to find an instructor who truly liked beginners.

The story could have come out very differently at any point she says.

She first met Dale Chihuly in Charlotte at the Mint Museum not long after she began glassblowing.

After she returned to Cedar Creek and built her studio gallery manager Jennifer Dolan appeared one day saying Somebody just called and wanted to know if they could bring
Dale Chihuly out next week to visit your studio.

It was November a very busy month for Cedar Creek.

Lisa laughs recalling how she replied Im really too busy for this. I dont know who is calling but thats pretty funny. Thats just the most ridiculous thing Ive ever heard because Dale Chihuly doesnt call up and ask if he can visit a glass studio.

She assumed someone was playing a practical joke on her.

Its the kind of thing I would do to somebody else she admits.

When the visit was confirmed for the following Tuesday she made sure to be in her studio blowing glass.

I had just started a piece when he got there she says. He sat and watched me blow that piece and finish it. We talked for a little while. It was wonderful for me. I think more than any other glassblower people I come in contact with ask me Do you know Dale Chihuly? Have you ever heard of Dale Chihuly? I just saw this thing on PBS about Dale Chihuly. I went to the Dale Chihuly exhibition. He has opened doors for all American glassblowers and probably glassblowers around the world just by making people aware of just what glass is and how magnificent it can be. Hes gotten people excited about glass. Most people cant afford to buy Dale Chihulys work but they can still love glass and buy somebody elses work. I got a chance to thank him for all that he had done for me in business as a glassblower and making it in this world.

Inside Lisas studio is a framed photo of her and the famed glass sculptor. It is not the first thing you see rather the last.