Apple of my Eye 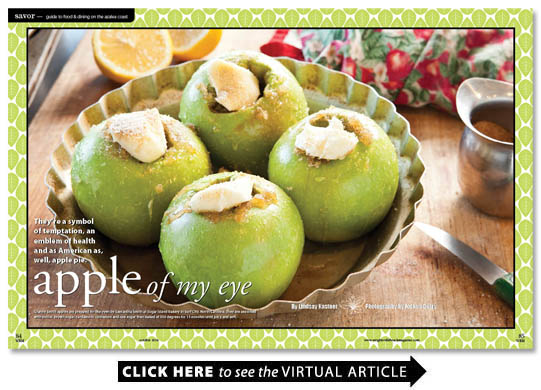 They re a symbol of temptation an emblem of health and as American as well apple pie.

Apples it turns out are a remarkably versatile fruit and one with deep North Carolina roots.

Though they originated in Asia apples have been grown in North Carolina since about the 1670s or 1680s says Creighton Lee Calhoun Jr. an heirloom apple enthusiast and author of the book Old Southern Apples.

Today most of the state s commercially grown apples come from the western part of the state but Calhoun says   Apples have been grown by farm families for hundreds of years even in the warm areas of the South.

Apples have myriad uses — just as at home in many savory preparations as well as in the archetypal pie — but not all varieties lend themselves well to all purposes.

Most apples that are sold in the stores are really designed to be eaten fresh as a snack — and as a result they are sweet apples   Calhoun explains.

You want an apple with more acid for cooking. A lot of the heirloom or antique apples are better for cooking than the modern apples are.

For pie Calhoun says it s best to choose an apple with high flavor and  a slightly dry texture that doesn t flood a pie with juice.

When grocery store apples are the only option he recommends combining Golden Delicious and Granny Smith and looking for apples grown in the eastern United States.

Out in the West they stock their apples in controlled atmosphere storage which allows apples to be held for a long time after harvest Calhoun says.

In the eastern United States very little controlled atmosphere storage is used so they ll be fresher   he says.

Calhoun started growing apples about 30 years ago after retiring from the Army and building a house near Pittsboro. When an elderly neighbor began recalling childhood memories of old apple varieties grown in the area Calhoun set off to find them.

He and his wife traveled the South gathering clippings from apple trees as far north as West Virginia and as far south as Georgia. At one point Calhoun had hundreds of different apple varieties growing in his home orchard.

These days he still has about 100 or so apple trees and a tireless appetite for the fruit.

Though he likes to eat apples in many different forms — he owns 23 cookbooks that contain nothing but apple recipes — Calhoun says one preparation never fails to please.

I m an American and I like apple pie. When I go to potlucks or people come here to eat they pretty much expect me to have apple pie and I usually do   he says.  Everybody loves apple pie.

When it comes to pie Granny Smith is the apple of choice for Millstone Creek Orchards owner Beverly Mooney who particularly likes them paired with Fujis. The Granny Smiths hold their shape nicely when baked preventing a mushy pie she says.

Apples are best stored in a cool place and for many varieties the refrigerator is ideal.

Once sliced they tend to turn brown quickly. It helps to hold them until serving time in a bowl of water to which a squeeze of lemon juice has been added but it may also be worth seeking out varieties that are known to retain their color well.

Jack Ruff marketing specialist with the North Carolina Department of Agriculture and Consumer Services suggests Gala Fuji and Jonagold apples for salads or other preparations where presentation is key.

Apples taste best when they have been allowed to ripen on the tree which isn t the case for most grocery store apples Calhoun says.

In supermarkets they re picked before they are ripe so they don t bruise   Calhoun says. He prefers buying apples from roadside stands.

In the Wilmington region vendors at both the Riverfront and Poplar Grove farmers  markets sell apples.

Frankie Pridgen started selling apples in August at the Riverfront market held in downtown Wilmington each Saturday.  He expects to have an ever-changing selection available through the end of October.

The area around Hendersonville with its ideal combination of warm days and cool nights has long been the state s premier apple-producing region Ruff says.

Although apples thrive in the state s mountainous region they can be found farther east as well.

Mooney s Millstone Creek Orchards in Ramseur is one closer option for those wishing to pluck their own apples right off the trees. The pick-your-own orchard is open seven days a week and is about 185 miles from Wrightsville Beach.

We have to work a little harder to grow apples because of where we re located   Mooney says. She fights a constant battle against a disease called fire blight that thrives in humidity and is therefore more trouble for Mooney than for her counterparts in the mountains.

Among the varieties ready for harvest in October is the Arkansas Black a tart juicy apple that Mooney says appears almost black on the tree but will lend applesauce a pinkish hue.

For apples straight from the farm check out the listings for orchards and roadside markets at www.pickyourown.org and www.ncfarmfresh.com

Few North Carolina orchards are certified organic and like many farmers Mooney uses some spray to keep disease and pests in check.

We re what you call a limited-spray orchard   Mooney says.  I have to spray enough to get a marketable fruit but my fruit is going to have little blemishes on it because we stop spraying generally two weeks before the harvest of a crop.

She and others say part of the reason for spray is that consumers demand good-looking fruit.

Calhoun says organic apple farming is possible in North Carolina but called it  a really rough row to hoe.

You have to lower your expectations dramatically   he says.  It s a lot of work and then you don t get much return for your efforts.

For most home orchardists he says a low-spray program is often a more practical approach.

Stud orange with cloves. Set aside. In large bowl whisk together first 5 ingredients. When ready to serve place ice ring or ice cubes in punch bowl. Add whole orange. Slowly pour in the apple-citrus mixture. Then slowly add the ginger ale and cider.

Serve in a bowl with an ice ring flecked with lemon slices.

Combine all ingredients in a saucepan. Cook until sugar melts and apples are softened. Set aside to cool completely.

Roll out pie dough on a well-floured surface. Cut out 12 rounds with 3-inch cookie cutter. Place 6 rounds on a greased sheet pan. Place a stick halfway into 6 of the rounds. Brush each round and stick with egg wash. This is super important as it helps the pop sticks bind to the pastry dough. Gently mound the apple filling in the center of the round on top of the stick. Cover with remaining 6 rounds. Use fingertips to seal the sides completely. Lightly indent sides with a fork for decoration if desired. Brush with egg wash and sprinkle with cinnamon sugar or raw sugar. Place sheet pans with pops in fridge to chill for 30 minutes. (You can easily double or triple this recipe and freeze unbaked pops.)

Preheat oven to 400 degrees. Slide pan in oven and bake 10-12 minutes until filling is bubbling and crust is golden brown. Let rest at least 10 minutes before removing from the pan.

Combine all ingredients in a medium saucepan and cook over low heat for 30 minutes until apples are tender and sugars are thickened and dissolved. Cool completely. Remove ginger and onion to store.

Beat eggs. Add sugar cinnamon and margarine. Mix well adding nuts and fruit. Be sure to add flour last.  Cream all together and pour into greased cake pan. Bake 1 1/2 hours at 350 degrees in an electric oven or 1 1/4 hours in a gas oven. Makes great Christmas muffins.